Travellers from India must have recognised test results

All Covid-19 pre-departure test results for travellers from India entering Singapore must come from recognised labs which are internationally accredited or endorsed by the Indian government, said the Ministry of Health (MOH).

Those without the required valid documents will not be allowed into the country.

Additionally, from today, all travellers – including Singapore citizens and permanent residents – with a recent travel history to India within the last 14 days before coming to Singapore will have to take a serology test.

The test detects the presence of antibodies and can show if the person might have been infected.

Those who test positive will be exempted from taking the polymerase chain reaction swab test – which detects the presence of viral genetic material – before the end of their two-week stay-home notice period.

The latest directive to produce valid pre-departure test results from recognised labs comes as faked test results are becoming increasingly common in India, with reports of agents and doctors taking bribes to produce them.

This requirement also follows a significant jump in imported cases from India.

Between last Thursday to Monday, two-thirds of Singapore’s imported cases, or 61% of them, had visited India.

MOH said that there will be two levels of checks – one at the airport in India before boarding, and the other at the arrival immigration in Singapore. — The Straits Times/ANN 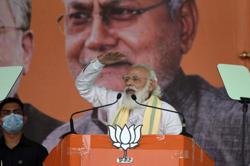