63 new Covid-19 cases in Singapore, including two in the community

Singapore has reported a total of 57,229 coronavirus cases so far. - ST

SINGAPORE (The Straits Times/ANN): There were 63 new coronavirus cases confirmed as of Thursday noon (Sept 10), taking Singapore's total to 57,229.

They included two community cases, comprising a Singaporean and a work pass holder, said the Ministry of Health (MOH) on Thursday.

There were also six imported cases who had been placed on stay-home notices upon arrival in Singapore.

On Wednesday, the Nanyang Technological University (NTU) confirmed that a former employee was on campus while infectious with Covid-19.

On Tuesday, MOH had added three locations in the university to a list of places visited by coronavirus patients.

In an advisory sent to students on Wednesday, NTU said the former employee's last working day was Aug 28, and he had not been on campus since.

He was not a member of the teaching staff, and did not show any symptoms while on campus and after he tested positive for the virus.

The university said he was swabbed when he landed at a foreign airport on Sept 1, and he informed NTU of his infection last Friday. It added that he did not know when or where he was exposed to the virus.

"We thank the former employee for informing us of his test results, and we wish him a speedy recovery," said the university.

NTU has worked with MOH to issue quarantine orders to all his close contacts.

"As a precautionary measure, we have carried out deep cleaning at the former employee's work areas," it added. "We have also stepped up cleaning of the affected common locations."

Among them was a sole patient from the community. The 33-year-old Bangladeshi man, a work permit holder, was linked to a cluster at the Kenyon/UBS construction site in the Dhoby Ghaut area.

He was detected as a result of rostered routine testing of workers in the construction, marine and process sectors who live outside dormitories, even though he did not show symptoms.

Fourteen imported cases were also announced on Wednesday. They were placed on 14-day stay-home notice upon arrival here.

Among the imported cases were two Singaporeans - a six-year-old boy and a 79-year-old man who arrived from India.

Migrant workers living in dormitories made up the remaining 60 new coronavirus patients announced on Wednesday.

Of the 60 new dorm cases, 31 are from Westlite Toh Guan dormitory.

The average number of new daily cases in the community in a week has decreased from three cases two weeks ago to two in the past week.

The number of unlinked cases in the community in a week has also decreased from a daily average of two cases to one over the same period.

Globally, the virus outbreak, which began in December last year, has infected more than 28 million people. More than 907,000 people have died. - The Straits Times/Asia News Network 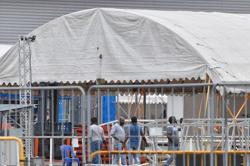 Three new Covid-19 cases in Singapore, none in community