YANGON (AFP): The banning of Myanmar's largest election monitoring group will have a "huge impact" on the transparency of November's national polls, the organisation's director said Friday (Aug 14).

Aung San Suu Kyi's National League for Democracy party won the last election in a landslide victory five years ago and the next national poll is planned for Nov 8.

But its director Sai Ye Kyaw Swar Myint announced Thursday that the group had been barred by the authorities.

"To bar PACE has a huge impact on the transparency of the process."

The move has caused outrage with more than 450 civil society groups issuing a joint statement calling for the decision to be overturned in the name of a "free and fair" election.

The Union Election Commission (UEC) at the end of last month told PACE it would be barred from elections for "receiving assistance from international organisations without being officially registered".

Sai Ye Kyaw Swar Myint said his group has always been open about its funding, but argued that receiving foreign money was legal.

The government had put bureaucratic obstacles in its way to prevent it from registering, he said.

"Without PACE the elections will not be credible," said Khin Zaw Win, director of policy advocacy group Tampadipa Institute.

He also questioned the impartiality of the UEC, whose members under Myanmar's constitution are entirely selected by the ruling party.

"You can't run a real respectable democracy without a reliable election commission," he added.

The polls are expected to return Aung San Suu Kyi's ruling NLD party to power despite rising disillusionment among the country's many ethnic minority groups. 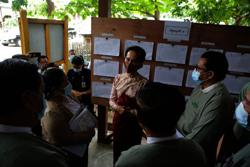 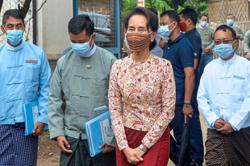