Under the terms, North Korea would swap 240 products for 167 tonnes of sugar from the South.- Reuters

The deal, brokered by a Chinese company, was signed in June with five North Korean trading firms, an official for the cooperative said, though it still needs approval from Seoul's Unification Ministry, which oversees inter-Korean affairs.

Under the terms, North Korea would swap 240 products -- including its signature ginseng and blueberry liquors, crackers, candies, teas and health supplements -- for 167 tonnes of sugar from the South, said Oh Hyun-kyung, the cooperative official.

"The North wanted sugar as they were having difficulty importing raw materials due to sanctions and the coronavirus pandemic," Oh told Reuters, saying shipments could begin later this month.

Oh said Korea Kaesong Koryo Insam Trading Corporation, a North Korean firm specialising in ginseng and health products, was one of the parties in the deal.

"The decision would be a starting point for our plans to consistently pursue humanitarian cooperation without linking it to political and military issues," Minister Lee said. 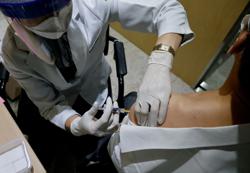