Ministry of Interior secretary of state Ouk Kim Lek responded to criticism concerning a draft law that would ban women from wearing overly revealing clothing, saying that input from all parties will be considered as the law moves through the promulgation process.

Several people have criticised some points of the draft law such as banning women from wearing short and revealing clothing and men from taking off their shirts in public places.

The users claimed that the law should be made to protect the rights of citizens, not to oppress them.

The petition read: “Women should be able to use their fundamental rights and the right to express themselves by wearing the clothes they choose. Blaming women for choosing to wear certain clothes supports the views that women are the main cause of the sexual violence they suffer. Therefore, it adds to a culture of impunity relating to violence against sexuality.”

Ouk told The Post on Tuesday that the criticism will help correct and improve the law before it is passed.

He said the draft law is still in its first phase and has been sent to capital and provincial administrations for review.

Civil society organisations and inter-ministerial groups will be invited to discuss the law before it is forwarded to the government for review and approval. — Phnom Penh Post/ANN 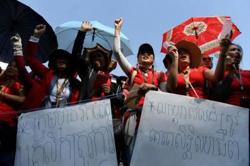