SINGAPORE, Aug 3 (Reuters): Philippine stocks tumbled on Monday as data showing a plunge in May remittances accelerated a sell-off initially fuelled by concerns over a lockdown extension in and around the capital.

The benchmark index fell as much as 4% to a two-month low, as the government reimposed coronavirus lockdown measures in Manila in response to fresh outbreaks and warnings from doctors and nurses of stressed healthcare facilities.

At the same time, remittances, which accounted for 9.3% of the country's gross domestic product in 2019, plunged 19.3% in May, stoking worries that the current account deficit may balloon and cause the peso to depreciate.

Remittances are a key source of foreign income for the country, and its current account is heavily dependent on them since it routinely posts trade deficit. However, remittances across the world have fallen sharply due to coronavirus-led salary cuts and job losses.

ING had said in May it expected remittances to contract by 6.9% in 2020 due to the pandemic, sending the current account deeper into deficit and forcing the peso to weaken to 52.19 by the end of the year.

The peso, however, held steady in the face of the news, having risen along with other regional currencies in July on the back of broad global weakness of the US dollar.

The Philippines is set to report its third-quarter economic growth data on Thursday and most analysts expect its GDP to slide sharply against last year. Indonesia's rupiah weakened after data showed its inflation rate eased in July to move further from the central bank's target range, prompting bets of more interest rate cuts.

The index had fallen 4.3% earlier as restrictions were extended in Jakarta in the midst of an undeterred spike in coronavirus cases.

Stalling economic momentum will likely pressure the central bank to trim rates further, ING said in a note, adding that given the rupiah's weakness due to recent cuts, additional easing was expected only if the currency returned to its appreciation trend. 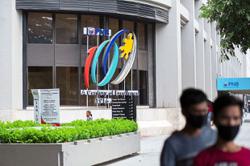