MANILA, Philippines, July 27 (The Philippine Inquirer/ANN) – The Philippines’ gross domestic product (GDP) likely slid by almost a fifth year-on-year during the second quarter at the height of the longest and most stringent coronavirus disease 2019 (COVID-19) lockdown in the region, London-based Capital Economics said. 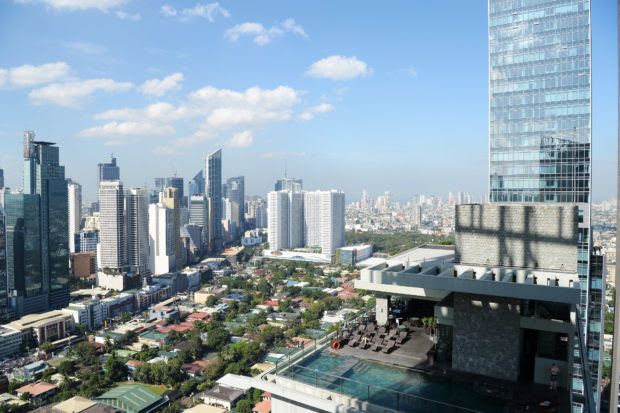 This photo taken on January 29, 2019 shows a general view of the skyline of the financial district of Makati in Manila. (Photo by Ted ALJIBE / AFP)

Capital Economics senior Asia economist Gareth Leather told the Inquirer in an email last Friday that their projection showed the Philippines’ GDP shrank by 18 percent year-on-year, which he described as “one of the biggest in the region,” during the April to June quarter.

In a webinar last week, Capital Economics’ global economists lumped together the Philippines, Thailand, Mexico, and Southern Europe among the economies which would most likely experience permanent loss of output from their respective domestic tourism sectors due to the pandemic.

For 2020, Capital Economics had forecast the Philippines’ GDP to shrink by 8 percent, in what could be the country’s biggest economic contraction in history.

The economic team was currently reviewing its earlier projection of 2-3.4 percent full-year GDP contraction after the country fell into a recession in the first half as the economy took a deeper-than-expected dive during the second quarter.

The government will release the official GDP figure on Aug. 6.