Singapore elections department to probe cause for slow polling process

The Elections Department will review the reasons for long queues that formed at some polling stations on the morning of polling day on July 10, 2020.- ST/ANN

SINGAPORE (The Straits Times/ANN): The Elections Department (ELD) on Monday (July 13) said it will conduct a thorough review of what went wrong on Polling Day last Friday that slowed down the voting process.

Long queues had formed at some polling stations from the morning, and polling hours were eventually extended from 8pm to 10pm so that all voters could cast their votes.

The ELD again apologised for the inconvenience caused to voters, especially to senior citizens, and acknowledged that measures put in place to protect the health of voters, candidates and officials had "reduced the efficiency voters were used to in previous elections".

Head of ELD Koh Siong Ling was responding to a forum letter published on Monday in The Straits Times. The writer, Dennis Tan Seow Koon, said that he and his 89-year-old mother took about an hour to cast their votes at Jing Shan Primary School after they arrived there at about 9.30am.

This was in comparison with the less than 10 minutes he took in the 2015 general election, he wrote.

Koh wrote: "We will conduct a thorough review to understand what went wrong and why they happened, especially at some polling stations."

As part of precautions taken for the election held during the Covid-19 outbreak, the 8am to noon slot was reserved for seniors aged 65 years and above to minimise their interaction with younger voters.

Voters also had to put on disposable gloves and sanitise their hands before they were given polling cards at polling stations.

But such measures contributed to long queues at several stations, including Palm View Primary School in Sengkang, the Singapore University of Technology and Design and in Jurong East Street 32.

Koh noted that the ELD had made adjustments to its processes on Polling Day "without compromising voter safety".

For instance, the requirement for voters to wear disposable gloves had added significantly to the time spent at polling stations. "Therefore, we did away with the need to don disposable gloves since voters would have sanitised their hands a few times," he said.

The queue situation did improve subsequently, he added, and 70 per cent of polling stations had queues of less than 20 voters by 2pm.

"But despite our best efforts, a number of polling stations continued to see long queues. We will also study why this is the case, and draw lessons for all polling stations in future," he said.

Koh also acknowledged feedback given about the difficulty in navigating the layout of certain polling stations, and said the ELD "will certainly take this into account for future".

"We will definitely pay special attention to the needs of senior voters and make their voting experience a smooth and comfortable one," he added.

On Monday, the ELD also said it had apologised to 13 voters staying in hotels for their 14-day stay-home notice period who did not get to vote.

This was because their names were inadvertently omitted from the list submitted by Marina Bay Sands to ELD at 6.30pm on Polling Day.

The 13 voters will have their names restored to the registers of electors without penalty, said ELD in response to queries.

A total of 790 Singaporeans had cast their votes at Marina Bay Sands and JW Marriott Singapore South Beach, which were designated as special polling stations. - The Straits Times/Asia News Network

Over 23,000 voter cards sent out ahead of by-election 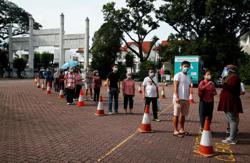