Essential workers being screened for Covid-19 at the regional screening centre set up at The Float @ Marina Bay, Singapore. - The Straits Times/Asian News Network

SINGAPORE, June 28 (The Straits Times/ANN): Infection in the community has increased with a five-year-old boy among 11 new community cases confirmed on Saturday by the Ministry of Health (MOH).

The boy belongs to a family cluster of two other Singaporean patients - a 35-year-old man and a 34-year-old woman. They had already been quarantined and swabbed.

They were contacts of a previously confirmed case, who had been tested as he works at a dormitory. All of them were asymptomatic.

According to the MOH, the 11 community cases comprise five Singaporeans and two work pass holders and four work permit holders. Migrant workers living in dormitories make up the other 280 new cases confirmed on Saturday.

This takes the total infection number in Singapore to 43,246.

"With more activities resuming in phase two (of reopening), it is critical that we continue to exercise caution to keep the number of new cases under control," warned the MOH in a statement late Saturday night.

Urging residents to exercise personal responsibility, MOH said: "Irresponsible behaviour that disregards the spirit of the rule to limit social gatherings to not more than five persons endangers others, and may lead to the formation of large infection clusters."

It said it would not hesitate to take actions against individuals who breach safety rules.

Another Singaporean patient confirmed on Saturday is a 66-year-old man. He was detected from surveillance of persons working at dormitories, even though he is asymptomatic.

Among the six work pass and work permit holders, two 37-year-old female patients from Myanmar and Indonesia had been identified as contacts of previously confirmed cases, and had already been quarantined earlier. The remaining four patients from India and Bangladesh were detected as part of the screening of workers in essential services.

A Covid-19 patient who was tested positive on June 6 died three weeks later on June 25 from injuries consistent with those resulting from a fall from height.

The 27 year-old male Bangladeshi national is the 12th person here who has tested positive for the coronavirus but died from other causes. Singapore has had 26 deaths from Covid-19 complications.

However, the cluster at 564 A-E Balestier Road has been closed as they have not had new cases linked to them for 28 days, or two incubation periods.

With 338 cases discharged on Saturday, 37,151 patients, or about 86 per cent of those infected, have fully recovered from the disease.

A total of 174 patients remain in hospital, including one in the intensive care unit, while 5,883 are recuperating in community facilities. - The Straits Times/Asian News Network Singapore: Only one local case on Sunday; 178 new Covid-19 cases in total 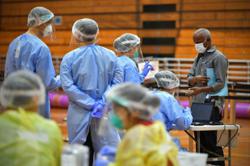