Lee Hsien Yang, the brother of Singapore's Prime Minister Lee Hsien Loong, sits for a coffee after been presented membership to the opposition Progress Singapore Party at at an event at the Tiong Bahru Market in Singapore on June 24, 2020. - AFP

SINGAPORE (Reuters): A public rift between the heirs of Lee Kuan Yew, Singapore's modern day founder, has shot to the fore with the prospect of his two sons squaring off at a July 10 general election.

Lee Hsien Yang on Wednesday (June 24) formally joined a new opposition party competing against his brother Lee Hsien Loong's People's Action Party, which has ruled the city-state since its independence since 1965.

The move comes amid a long-standing and bitter dispute between the siblings centred around what to do with their late father's house -- demolish it, or let the government decide whether to make it a heritage landmark.

On one side of the dispute stands the eldest son, Prime Minister Lee Hsien Loong, 68, who believes the government must decide what should be done.

On the other are his siblings -- Lee Hsien Yang and his sister Lee Wei Ling.

They say their father's will stated the house should eventually be demolished after his death and they have accused Prime Minister Lee of wanting to preserve the house to build his own political capital.

"His popularity is inextricably linked to Lee Kuan Yew's legacy," they said in a 2017 statement.

Prime Minister Lee has said his father was prepared to consider alternatives for the property if the government decided to gazette the site and that he has recused himself from government discussions on the matter.

Lee Hsien Yang last year said the PAP had "lost its way" and threw his support behind the newly-formed Progress Singapore Party, led by a former PAP lawmaker.

While he officially joined the party on Wednesday, he has not confirmed if he will run as a candidate in the upcoming poll. The deadline for nominations is June 30.

Lee Kuan Yew, popularly known as LKY, moved into the five-bedroom house at 38 Oxley Road in 1945. He led the country for three decades and it was from his home that his People's Action Party, which has governed since independence and never seen its vote share drop below 60%, was conceived.

A government panel set up to consider the future of the house said in a 2018 report that a future government should make the final decision. It laid out three options: preserving the house as a national monument, preserving part of it, or demolishing it.

The historic property was valued by estate agents at about S$24 million (US$17 million) in 2017.

The family insists the feud is not about the money.

The house is owned by the younger brother, Hsien Yang, and his unmarried sister, Wei Ling, lives there. Nothing can happen to the house until she chooses to move out.

Prime Minister Lee says his father bequeathed the property to him, and he later sold it to Hsien Yang at a fair market valuation. The proceeds were donated to charity.

LKY, who died in 2015, stated publicly that he wanted the house to be demolished as he did not like the idea of tourists visiting it and that it would cost a lot to preserve.

He also said so in his will, but added that if that could not happen, then he wanted it closed to everyone, except family and descendants.

Lee Hsien Yang's wife, lawyer Lee Suet Fern, was earlier this year found guilty by a disciplinary tribunal of professional misconduct over her involvement in preparing his will.

Lee Suet Fern said she disagreed with the tribunal's findings and would fight the allegations in court. - Reuters 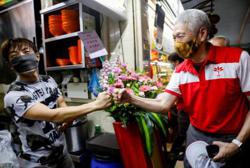