Yuriko Koike is viewed as a potential candidate to succeed Abe when his term ends in September 2021. For now, she says she’s focused on protecting Tokyo, a megacity with a US$1 trillion economy. - AP

TOKYO (AP): Japan may have contained its coronavirus outbreaks for now but the country needs better crisis management and a digital transformation to prepare for future shocks, Tokyo Governor Yuriko Koike said.

"We have to sort out the problems and start preparing now for a possible next wave, ” Koike said in an interview with The Associated Press.

"I will firmly strengthen the system."

Koike is favoured to win a second term in a July 5 election after gaining respect for her proactive approach to controlling coronavirus outbreaks in Japan’s capital.

As the pandemic deepened in the spring, Koike often upstaged fellow conservative Prime Minister Shinzo Abe, whose popularity has suffered from his handling of the crisis and its devastating impact on the economy, on top of a slew of scandals.

Koike is viewed as a potential candidate to succeed Abe when his term ends in September 2021. For now, she says she’s focused on protecting Tokyo, a megacity with a $1 trillion economy.

"Tackling coronavirus measures is an extremely big challenge, and it’s more important than anything else, ” she said Wednesday on the eve of a 17-day campaign period for the election.

Taking care not to criticise Abe directly, Koike said she had to coordinate with him to get things done by requesting help on the national level, implying she would have handled things differently.

"There were times when Tokyo had to go ahead, in the spirit of encouraging the national government, ” she said. "It is my mission to protect the lives and health of the 14 million people in the city and I was doing everything I could.”

Among other things, Koike says Japan should have its own version of the Centers for Disease Control and Prevention in the US to fight infectious diseases.

She noted that despite the country's high-tech image, as the pandemic took hold health centres were using fax machines to transmit medical data, slowing responses and information sharing.

Although Japan has universal, relatively affordable health care and local health centers, unlike its neighbors it had not suffered major outbreaks of other infectious viruses such as SARS or MERS and was therefore unprepared to react quickly when cases began surfacing in January.

The health ministry set up a nationwide online data sharing system only after Tokyo had to make major corrections of coronavirus cases numbers in May amid mishandling of data transmitted by faxes.

Though Koike has not fully delivered on promises to Tokyo residents to get rid of packed commuter trains, ensure adequate availability of child and elder care facilities and end overwork, even her critics laud her handling of the pandemic.

Until late March, both Abe and Koike were insisting on the Tokyo Olympics would go ahead as planned in July.

Once the games were postponed until July 2021, Koike began pushing for urgent measures to fight the pandemic and urged the government to declare a state of emergency. Abe appeared reluctant to do that, and has been accused of doing too little, too late.

She led the way in arranging for hotels to take in quarantine patients with no or slight symptoms to free up hospital beds to prevent a collapse of the overwhelmed medical system in the capital region.

"Koike seems to have managed the coronavirus situation more smoothly than the national government, ” said Ryosuke Nishida, a professor at the Tokyo Institute of Technology, though he noted their roles were different.

Koike shares the same nationalist policy stance as Abe, but their relationship has been compared to the tug of war between President Donald Trump and New York's Democratic Gov.Andrew Cuomo, whose state was ravaged by the pandemic.

A TV newscaster-turned-politician, Koike is stylish and media savvy. A smooth talker who sounds decisive, like Cuomo she is articulate and to the point. She does not stray from facts, and she has one mission: to protect Tokyo.

Also like Cuomo, at the height of the outbreaks she held daily updates on YouTube, capturing viewers' attention with warnings about "explosions” of infections and the risks of the "3 Cs" -- closed spaces, crowded places and close conversations.

Koike also fought to get requests for a partial shutdown of businesses sooner.

"Abe did not make any big mistakes, but his handling looked inferior” to Koike's and some other local leaders, ' said Yu Uchiyama, University of Tokyo professor of political science.

"Koike has high communication skills, but Abe does not.”

Koike was an LDP lawmaker for nearly 20 years and has served in key Cabinet and ruling party posts, helping to crash what she's described not as a glass ceiling for women in Japan but an "iron plate." She was Japan's first female defense minister and has held other Cabinet posts. After failing to win the LDP presidency she set her sights on becoming Tokyo's first female governor, in July 2016.

She earned the nickname "migratory bird" for hopping between parties and forming new alliances - at least seven times - in contrast with other Japanese politicians famous for their loyalty to party factions.

As Tokyo governor, Koike has pushed for populist measures such as administrative reforms, wiser spending and reviewing costly venues for the Tokyo 2020 Olympics.

She does not commit to any particular principles or policy goals, Nishida said,"But Koike has an aura and she stands out.”

Analysts say she is almost certain to win the election next month despite some recent setbacks including a challenge by popular actor-turned-politician Taro Yamamoto. He wants to cancel the Tokyo Olympics and use funds saved to help people hurt by the coronavirus crisis.

Koike says that instead she wants the games to be a model for future Olympics and Paralympics while finding ways to simplify and economize.

"There are many issues to be resolved, but when we share a major global goal it can be become a proof of our victory against the coronavirus," she said. "What a meaningful event it will be.” - AP 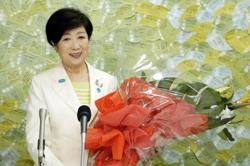