A black flag associated with the Islamic State (IS) group is displayed in a press conference held by the police in Surakarta, Central Java. A sword-wielding militant killed an Indonesian policeman and critically injured another on Monday (June 1) in what authorities described as a suspected Islamic State-linked attack. - Jakarta Post/Asian News Network

JAKARTA (AFP): A sword-wielding militant killed an Indonesian policeman and critically injured another on Monday (June 1) in what authorities described as a suspected Islamic State-linked attack.

The attacker was shot dead during the early morning raid at a police post in South Daha district on Kalimantan -- Indonesia's section of Borneo island.

Indonesia's national police initially said there were two attackers, but local authorities later said only one militant was directly involved.

"We're still investigating possible links" to IS, he added.

The militant -- identified as a 19-year-old local named Abdurrahman -- initially set a car on fire outside the police post, Jaya said.

"When it exploded, one of the officers came outside to check and that's when the initial attack started," he added.

Images from the scene showed an apparently deceased man lying on his back inside the police station.

Authorities said they confiscated his sword, a Koran, a handwritten letter calling for jihad and a flag bearing the "tauhid" -- which expresses the belief in Allah as the one and only god.

Images of the black and white-lettered flag showed it resembled one commonly used by IS followers.

Indonesia, the world's most populous Muslim-majority nation, has long struggled with Islamist militancy and is home to dozens of radical groups that have pledged loyalty to Islamic State's violent ideology.

Monday's incident happened on a public holiday that celebrates the Southeast Asian archipelago's pluralist democracy, and many past attacks have been against police and other state symbols.

In April, a couple with links to Islamic State went on trial for a failed assassination attempt on Indonesia's former chief security minister last year.

The pair were allegedly members Jamaah Ansharut Daulah (JAD), an IS-linked extremist group responsible for a string of attacks, including suicide bombings at churches in Indonesia's second-biggest city Surabaya in 2018 that killed a dozen people. 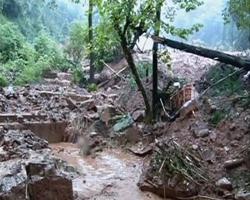 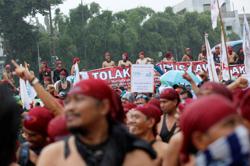