"We suspect that there still infected people out there without our knowledge because ever since we launched the Active Finding Case (AFC) where we did random testing in high risk communities, we have picked up several people who have tested positive for Covid-19," said Taweesin.

The spokesman also reported that from May 8 to 21,45 people tested positive for the disease, while 20 of them were infected in other countries and were quarantined on return to Thailand.

Taweesin said out of the 25 who caught the virus locally, six tested positive from AFC testing.

As of Friday's virus daily report, there were zero new case, zero death.

Globally, cumulative cases have passed 5 million with around 330,000 deaths.

In the last two weeks, positive Covid-19 cases have been detected in returnees from overseas.

According to data, confirmed cases in last 14 days have been found in state quarantine (15 cases), close contacts (11), proactive testing (6) immigration quarantine area (5) people visiting community areas (5) and infection from occupations such as deliveryman (3).

Dr Taweesin explained the reason why the ThaiChana platform has to record location data for two months.

The decision was made based on Public Health Ministry statistics that when an outbreak occurs, such as at the boxing stadium on March 11, it took around two months to find all related and close contacts of the positive cases.

He lauded all citizens who are cooperating by wearing face masks to reduce the risk of the virus spreading. It has been found that more than 90 per cent of Thai people wear masks when in public places, he said.- The Nation Thailand/Asian News Network 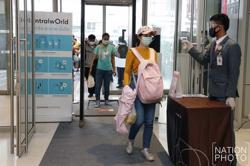