Poor condition: The transit centre for expectant mothers in Gua Musang has no proper furniture and is in a mess.

GUA MUSANG: He was expecting a place where his family could rest as they awaited the arrival of their second son.

But Temiar farmer M. Remy, 21, was in for a shock. The orang asli found the government centre for the community to be filthy, neglected and in the kind of conditions that are far from hygienic.

One can smell the stench from Rumah Transit Kuala Bertis from quite a distance. There is rubbish everywhere. The toilets stink and there doesn’t seem to be anyone maintaining them.

The place is infested with flies and the pests can be seen on sleeping children and would-be mothers. The children and mothers sleep on cold floors, with no mattresses and in many cases, no blankets.

The closest thing to a bed are wooden planks on which some of the orang asli mothers-to-be sleep.

Those with young children recycle diapers. The soiled diapers are cleaned and left to dry before being used again. For some reason, the orang asli do not use cloth napkins but commercial diapers.

Some of them claim there is often no nurse around to check on them.

He said besides the three meals a day, the centre provided little else to the family.

“We have to sleep on the floor, in an open hall with other families,” Remy said, adding there was electricity and lights but no fans. Discomfort: At Rumah Transit Kuala Bertis children and mothers sleep on cold floors, with no mattresses and in many cases, no blankets. Flies can be seen on this sleeping child and near food containers (pic below) used by the orang asli.

The transit home, located 200m from the Kuala Bertis government clinic, was set up to accommodate and allow expectant mothers or those needing medical treatment to get prompt healthcare.

The orang asli mothers-to-be come from their villages days before they are due to give birth and stay in the transit home until childbirth.

Nani is from Kampung Pos Belatim, one of 11 orang asli villages which dot the hills of Gua Musang.

“We were expecting better facilities. We are very disappointed,” Remy said.

He said Nani went into labour the day before and they had to hitch a ride in his friend’s car to get to the government clinic up the hill.

From there, she was taken to the Gua Musang Hospital in a four-wheel drive. 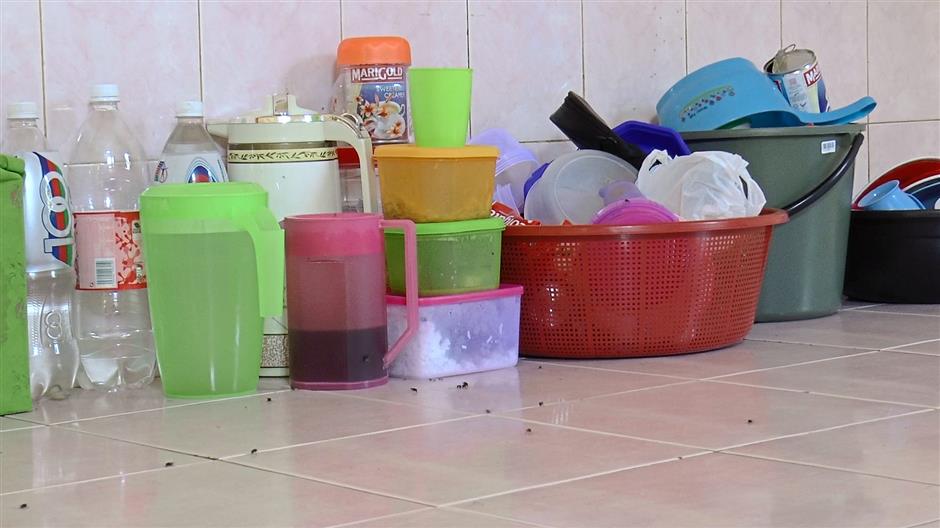 For most of the other orang asli, they have to ride pillion on a motorcycle to the clinic when the labour pains come. From there, they are taken in four-wheel-drive vehicles to the hospital.

Remy pointed out that conditions at the transit centre in Gerik, Perak, where he had taken Nani when they were expecting their first child, was so much better.

He said the transit centre was in a two-storey building and had beds and pillows.

“There, we got milk powder, clothes and even napkins after the baby was born,” he said.

Remy said his wife and newborn would be brought back to the transit centre after they are discharged.

“I am not sure how long we have to stay here,” he said.

Remy said the toilets were also in terrible condition and they had to take turns to wash it.

The team from The Star was also appalled at the dilapidated conditions of the centre which looked like an old school or a huge junkyard.

There were at least 20 people, including newborns as well as children, sleeping on bare floors with flies on their bodies. The recycled disposable diapers were hanging to dry on a fence.

The kitchen was locked and some of the residents said it was open only when the day’s three meals were served. Yet another orang asli said they received only two meals a day. And food is usually some boiled stuff.

There was also an abandoned ambulance at the centre.

A man believed to be a representative from the Orang Asli Affairs Department (JHEOA), which administers the centre, was seen discouraging others from speaking to The Star team.

However, villagers from Kampung Penad, some three hours away and accessible by four-wheel-drive vehicles, shared similar unpleasant experiences about the centre.

Sarinas Abut, 33, remembered the bad food she was served there when she was expecting her baby.

She said there was not even a mattress and it was very uncomfortable.

Sarinas said she had to walk up the hill to the clinic when she went into labour before she was taken to the hospital in Gua Musang.

Housewife Midah Angah also remembered sleeping on the cold floor and the poor conditions of the toilets.

“I was also there after I delivered my baby and there were no sanitary pads.

“JHEOA is supposed to take care of us,” she said.

“We have voiced our problems many times but we get ignored. I hope our plight will be made known to the people out there.

“The orang asli were isolated before and the authorities did not take any interest in our problems.

“I hope things will change now,” he said.

Dept up against superstition