All clear for foreign worker dorms

The state government has approved guidelines for such dormitories and four operators have stepped forward to build them.

“Two of the operators have submitted plans for foreign worker dorms near Batu Maung and Bukit Minyak.

“We expect construction to start next year and once the dorms are done, we hope social problems related to foreign workers can be solved too,” state Housing, Town and Country Planning Committee chairman Jagdeep Singh Deo announced yesterday. Foreign workers make up an estimated 20% to 25% of the state’s workforce, though accurate figures are hard to come by.

The republic’s “mega-dorms” span over 20 acres and come with cinemas, food courts, beer gardens and even cricket fields.

Jagdeep Singh said he had made a trip to Singapore to see the dorms.

He said the guidelines allowed an 800sq ft-unit to accommodate up to 18 people.

He said these dorms would be zoned as commercial or industrial areas so that developers could not package them as residential pro-perties.

“Each of these buildings will have sundry shops, cooking areas, medical and sports facilities.

“The workers will be able to get everything and they don’t need to go out after returning from work,” he said after opening the International Meatless Day Charity Carnival 2015 at Methodist Boys’ School in Jalan Air Itam.

Last November, Singapore public-listed corporation Centurion Corporation Limited announced that it had won an open tender from Penang Development Cor-poration to build a foreign worker dorm of 12,000 beds in Juru near the Bukit Minyak Industrial Park.

The reported payable land cost was RM20.8mil, and an artist’s impression of the site shows 12 four-storey blocks.

It was reported that the facilities would include an Internet room, games room, canteen, laundry room, barber shop, grocery shops and TV room. 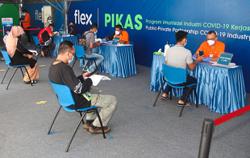