Labour of love: The sea turtle labouring to get back to the ocean after spending about an hour to lay her eggs in the beach nesting. Inset shows the handful of eggs dug out.

GEORGE TOWN: It is the norm for a turtle to lay about 100 eggs or more each time but only a handful were found after one turtle nested on Batu Ferringhi beach.

Despite efforts to secure the turtle nest, it is believed most of the eggs were stolen.

Fisheries Department officers who had dug up the nest to recover the eggs for incubation and hatching at the Pantai Kerachut Turtle Sanctuary could only find five eggs.

Rasa Sayang Resort and Spa communications director Suleiman Tunku Abdul Rahman said the site fronting the resort was cordoned off when the hotel learnt of the turtle landing.

“We were notified about this early in the morning and we quickly closed the area where the turtle was sighted.

“There had been a change of guards in between and I think this was when the eggs were stolen,” he said. 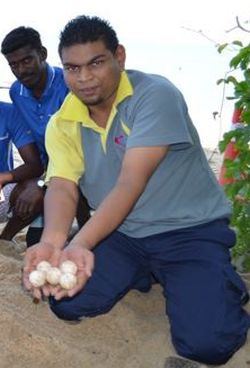 The handful of eggs dug out.

Fisheries officers who were duly informed found the five eggs when they located the nest at 11am.

Suleiman said a turtle had also nested on the beach fronting Rasa Sayang’s sister hotel Golden Sands Resort in August, and that the fisheries team recovered about 140 eggs then.

“The turtle sighting is a good omen but it is sad that many eggs are missing,” Suleiman said.

A hotel worker first spotted the female turtle crawling up the beach at about 6am yesterday. It left at about 7.15am.

A crowd of hotel employees and guest had by then gathered to capture the moment with their smartphones.

“It would take about 30 minutes for it to lay its egg. We can be certain that the turtle will come back again to lay eggs again in the same spot.

The five recovered eggs will be incubated and hatched at the turtle sanctuary on the northern edge of the island.