KUCHING: The hairless sun bear rescued near Sibu last month has died from cancer at the Matang Wildlife Centre.

Sarawak Forestry Corporation (SFC) said the sun bear, which appeared to have been recovering, had been very sick for more than a week and died late Monday evening.

An autopsy concluded that the animal died of late-stage cancer.

“The bear had not been eating well and had been vomiting. Worrying for its health, emergency medical intervention was performed under sedation.

“It was also fed with fluids intravenously and food through a stomach tube,” SFC said in a statement on Wednesday.

“Unfortunately, it succumbed to cancer with metastasis in the lymph nodes and adjacent organs as well as obstruction in the stomach due to a tumour.”

SFC said a detailed examination of the bear also revealed that it was in fact a very old animal and not just a full adult as previously thought.

“Cancer aside, the bear had probably reached the end of its natural life span,” it added.

The sun bear had been first spotted in January by Indonesian plantation workers, who were shocked by how strange it looked.

Photos and videos of the animal went viral online, attracting many comments on its Gollum-like appearance.

It was later found by workers near a palm oil estate in Meradong district on April 2 and handed over to SFC.

Sun bears are the smallest of the world’s eight bear species and are found throughout mainland Asia, Sumatra and Borneo.

They are classified as “vulnerable” on the IUCN Red List and are at risk of becoming endangered unless circumstances threatening their survival improve.

In Sarawak, the sun bear is protected under the Wild Life Protection Ordinance 1998. 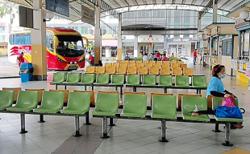