Prices stay put: Food stall operators are not reducing the price of food despite the drop in fuel price.

PETALING JAYA: Rises in fuel cost usually lead to higher cost of food in eateries but there has been no corresponding drop in the prices of food in restaurants, coffee shops and stalls in spite of the much lower prices of fuel today.

Operators are blaming this on suppliers charging the same rates while they in turn point their fingers at transporters.

The Pan–Malaysia Lorry Owners’ Association (PMLOA) has urged its members to follow the current trend in diesel prices to adjust transportation charges.

However, its president Jong Foh Jit said the margin of adjustment could not be indicated because of restrictions set by the Malaysian Competition Commission (MYCC).

“The descending price of diesel is based on the general trend of global crude oil price but how long this trend will last remains unknown,” he said.

Jong also urged the government to reduce the tax on spare parts and tyres.

“We are dependent on suppliers who have not revised their rates, even after fuel prices first dropped last month.

“We are ready to lower food prices as it will mean more customers and profits but we cannot sustain the charges put on us by suppliers,” he said. 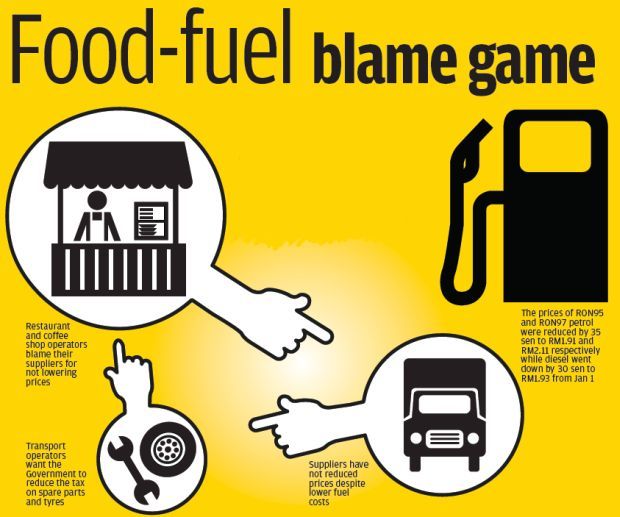 Under the managed float system introduced in December, RON95 and RON97 were priced at RM2.26 and RM2.46 per litre respectively, while the price of diesel was RM2.23 a litre.

Noorul Hassan urged suppliers to be more responsible and be open to discussions with restaurant owners on how to reduce prices.

“Restaurants supplied by big companies do not have much bargaining power because these firms do not rely on them for profits.

“Only outlets supplied by small firms are able to ask for lower prices,” he said, adding that prices of many vegetables and fish have also shot up, increasing costs further.

“Our transport charges to get supplies remain the same although fuel prices are going down since the government scrapped subsidies.

“We will wait and see if there will be any lower transport charges and other expenses and then we will advise members to reduce prices,” he said.

Ho said coffee shops had other expenses such as utility bills, rentals staff wages consider before lowering their food prices.

“Electricity and water bills for coffee shops are high and rental of a shop in Kuala Lumpur can be between RM20,000 to RM30,000 a month.

“Transport charges have to be reduced before we can bring in all these other expenses and see if lowering our food prices can be justified,” he said.

Consumer Association of Penang (CAP) officer Uma Ramaswamy said it was time for the Domestic Trade and Consumer Affairs Ministry to enforce the Anti-Profiteering Act.

She said the ministry should ensure that the prices of food correspond with fuel prices.

“If consumers feel that traders are earning more than they should, they should lodge complaints with the ministry,” she said.