SUBANG: Almost a hundred animals were rescued from a bungalow here, cramped into cages not much bigger than themselves in an unkempt yard reeking of a strong stench and littered with various automobile parts.

Yesterday, members of Malaysia Independent Animal Rescue and the police swept into the compound which is believed to be an illegal animal breeding facility, in what has been described as the “biggest and worst case of animal abuse” in the country.

Around 80 dogs were found on the premises – some in cages and others restrained – along with three cats, two geese, several birds and chickens and a gibbon.

“This is the biggest and worst case I have dealt with because there are so many animals involved,” said president of the animal rights group Puspa Rani.

“I have seen illegal breeders with around 20 dogs or so. But I’ve never heard of one of this scale,” she said, adding that she was “shocked” and “devastated” to see so many animals in poor condition.

“Some have open wounds while others can’t walk. Some are blind. Many are also severely malnourished, with several not having food or clean water. They need urgent treatment,” she said.

Puspa had lodged a report at the Kampung Baru Subang police station following a tip-off on Facebook about the compound. “I will be lodging another report with the Veterinary Service Department and Perhilitan so that they can carry out an investigation into the matter,” she said.

Pedigree puppies bred at such facilities could sell for RM1,000 each, she added.

Puspa believes that the bungalow owner – a 52-year-old mechanic and his wife – also had in their possession some protected species that might require documentation from wildlife authorities.

“The monkey is a protected species and I suspect some birds are as well,” she said.

Both the owner and his wife had been cooperative so far, surrendering the animals into the group’s care.

Animal abusers can be fined up to RM50,000, jailed for not more than a year or both under the Animals Act.

The penalty for keeping protected species without a valid licence is a fine of up to RM50,000, a jail term of up to two years or both under the Wildlife Conservation Act.

The Star had previously highlighted that rising demand for cute pedigree puppies had created unethical and cruel “puppy mills”. 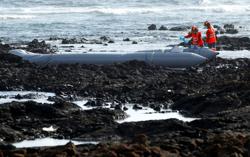