Soot and ashes: Fire and Rescue Department forensic personnel inspecting the coal mine area after the explosion. — ZULAZHAR SHEBLEE / The Star

KUCHING: The scene of the mine explosion was a picture of blackness.

Coal dust was everywhere – on the ground, on the tables and chairs, on the hands of workers and shortly on my face too. Just minutes after entering the compound, I could feel its coarseness on my skin.

I was part of a small team of photographers and reporters who arrived at the mine at about 4.15pm. The journey had taken longer than expected because the mine was hard to find.

We had made a 130km journey from Kuching, taken a right turn into an unmarked road and travelled through stretches of bumpy gravel tracks.

There are no signboards indicating where the mine is. A gate before the entrance only carries a sign which reads “private property”.

When my colleague Zulazhar Sheblee and I got there, we had to convince a trio of foreigners to let us in. After they finally did, we drove past a coal stockyard, then uphill and turned left into what was essentially a flow of mud. 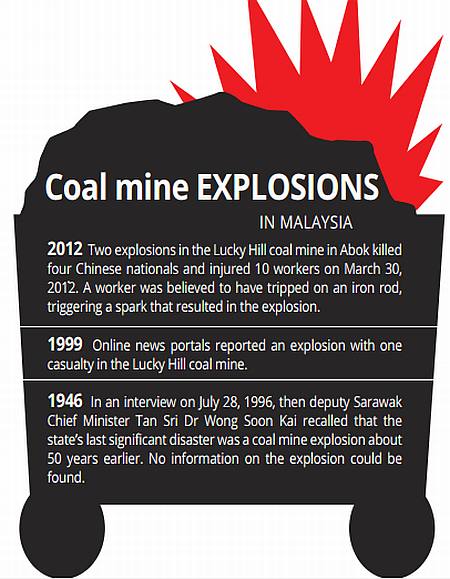 We were relieved when we saw Fire and Rescue trucks. It became clear that this was not a large mine. The stockyard had just a few small mounds of coal.

A dozen or so Fire and Rescue Department forensic officers were busy setting up a makeshift operations centre underneath what seemed to be the only roofed structure in the area.

The wooden hut looked like the main workshop, which also contained what appeared to be the site office.

All of us were crammed into a space about as large as a basketball court and strewn with empty oil tanks, bundles of cables, gas cylinders, chains and benches.

A few metres away, investigators were grilling a camp worker, later identified to us as the “supervisor”. The “supervisor” had earlier tried to bar reporters and photographers from the site.

Had the investigators not been around, most of us would have left. There were only a few workers, the media and investigators at the mine compound.

The media members gathered into two groups, one listening in on the interview between the “supervisor” and investigators and the other surrounding an “ops board” being filled with details as they were being radioed in.

What had caught my attention was that one of the deceased workers was listed as a North Korean.

When I was at the Sarawak General Hospital to begin coverage of this story, I had noted that some workers at the accident and emergency unit were speaking Korean. I had assumed then that they were South Koreans.

All of us were surprised to see “Korea Utara” listed on the “ops board”. North Koreans indeed made up the majority of the 119 workers at the mine.

As the impromptu press conference went on grisly details, like how the dead apparently did not die immediately but had tried to crawl towards the exit, emerged.

Eyewitnesses also recalled heart-warming stories about how members of the public helped to drive the victims to hospitals.

We also learnt that the explosion had not been big.

The “supervisor” told investigators he had not heard it and was only notified about the explosion through a call on a landline (mobile reception in the area is bad).

At the end of the day, there were a lot more questions than answers.

The Fire and Rescue Department Investigators made it clear that none of their colleagues had entered the tunnels.