After months of issuing warnings, the Road Transport Department (JPJ) will begin its nation-wide crackdown against motorists flouting rules and specifications from today.

“We have given motorists enough warnings not to use modified registration plates and unapproved HID headlamps. The time for compromises is over. No excuses will be entertained.

Mandatory summonses will be issued,” he told The Star.

Ismail said under JPJ specifications, only three types of number plates are allowed.

Taxis and hired cars should have black letters and numbers, embossed or glued on a white plate.

Owners of cars and motorcycles above 250cc, who breach the rules on number plates would be issued a compoundable fine of RM100 (if settled within two weeks), RM150 (if settled between two weeks and a month) and RM250 (if settled after a month).

Owners of motorcycles below 250cc will be fined RM70 (if settled within two weeks), RM120 (between two weeks and a month) and RM200 (if more than a month) Ismail said HID headlamps, that use Xenon gas instead of filaments, were not allowed to be used except in cases where changes are made to the vehicle’s whole lighting system with accreditation from the Standards and Industrial Research Institute of Malaysia
(Sirim). 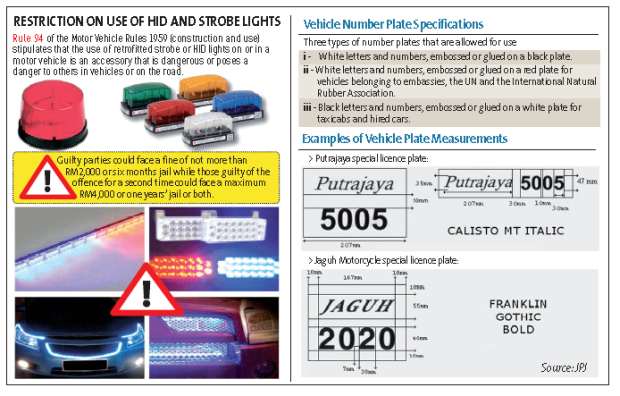 “Retrofitted HID which is too strong can disrupt other road users’ vision and risk their safety,” he said.

As for strobe or beacon lights, a type of multi-coloured warning light, he said private vehicles were barred from installing such devices under Rule 24 of the 1959 Motor Vehicle Rules (Traffic).

He said only police, JPJ, Fire and Rescue Department vehicles and ambulances were given priority over other traffic.

However, he said the JPJ Director-General had the discretion to exempt any vehicle from having to adhere to specifications under Rule 138 (1) of the 1959 Motor Vehicle Rules (Construction and Use), The fine for illegal use of strobe lights and HID headlamps is RM100 (if settled within two weeks), RM150 (between two weeks and a month) and RM250 (if more than a month).

On heavily tinted vehicle windshields and windows, Ismail said JPJ had postponed the date for the new level of tint allowable to May 1 next year.

The enforcement of the new regulation under which the windows and rear windscreens can be tinted up to 70% (or 30% of visible light transmission), compared with 50% currently, was originally scheduled for today.

“We postponed the enforcement date by six months to give owners of imported vehicles enough time to replace the tints, after JPJ received numerous appeals,” he said.