KUCHING: It was complete pandemonium at the State Stadium here on Saturday midnight when hundreds of rioters torched and overturned police cars after a football match between Sarawak and Perak.

Not since the late 1980s has there been riots of a similar scale after a football match in Sarawak.

The Star's photographer Zulazhar Sheblee, who was covering the match, witnessed the chaos first-hand.

"It was right after the final whistle at 11pm when it all started. Spectators inside the stadium threw bottles, firecrackers and even parts of the fence at the pitch.

"The first of the rioters on the pitch kicked and damaged the advertisements. Outside the stadium, a crowd that had gathered broke through the main gates. By then, the Federal Reserve Unit (FRU) was deployed," Zulazhar said.

He said it took about three hours for crowds to disperse and calm to return.

"I managed to exit the stadium around 2am. There were still some light scuffles going on," he said.

The extent of the damage is unclear, but eyewitness said at least four police cars were targeted. 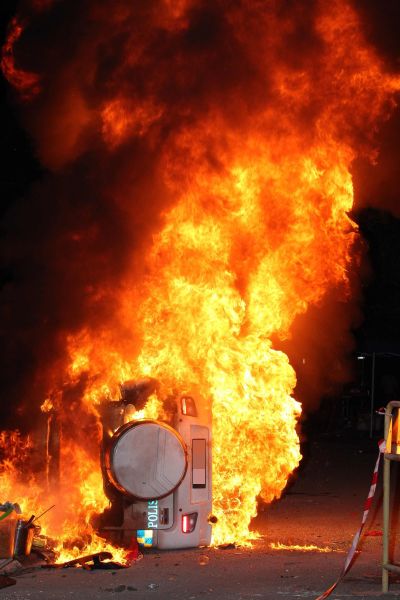 One of the torched police vehcles.

Three were Perodua Kancils, with one smashed, another overturned and another pushed into the drain, while a Kembara was torched.

It is unclear what exactly triggered the riots, but initial reports suggest it was Sarawak fans directing their anger at the Perak team and decisions made by the referee during the game.

There were injuries some involving young children.

The match ended with 1-1, effectively ending Sarawak's dream at winning the Malaysia Cup.