PETALING JAYA: The unofficial list of the MH17 flight manifest states that 20 Malaysians and two infants were on board the plane that was reportedly shot down by insurgents near the Russian-Ukrainian border.

The highest number of passengers are from Netherlands with 143 passengers. Australia comes in second with 27 passengers.

There were 11 Indonesian passengers and one infant on-board the ill-fated flight. Britain has six passengers, France and Germany have four each, Belgium have three and Canada one.

Nationalities of the other 58 passengers were not stated in the list. 15 MAS crew members were on the plane.

MH17 was brought down over eastern Ukraine on Thursday, killing all 295 people aboard and sharply raising the stakes in a conflict between Kiev and pro-Moscow rebels in which Russia and the West back opposing sides. 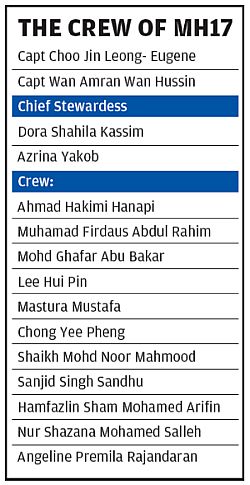 The scale of the disaster affecting scores of foreigners could prove a turning point for international pressure to resolve a crisis that has claimed hundreds of lives in Ukraine since pro-Western protests toppled the Moscow-backed president in Kiev in February and Russia annexed Crimea a month later.

Despite the shooting down of several Ukrainian military aircraft in the area in recent months, including two this week, and renewed accusations from Kiev that Russian forces were taking a direct part, international air lanes had remained open.

MAS said air traffic controllers lost contact with flight MH-17 at 1415 GMT as it flew over eastern Ukraine towards the Russian border, bound for Asia with 280 passengers and 15 crew aboard.

Flight tracking data indicated it was at its cruising altitude of 10,000 metres when it disappeared.