MH370: Malaysian life insurance companies pay over RM14mil to next of kin

KUALA LUMPUR: Malaysian life insurers have paid over RM14.2mil in compensation payouts to the family members of passengers with life insurance onboard the missing Malaysia Airlines (MAS) flight MH370.

Life Insurance Association of Malaysia (LIAM) president, Vincent Kwo said life insurance companies in Malaysia had taken a consolidated and proactive approach in expediting the claims process of compensation payouts to the next of kin.

He said payments had been and were being made to several next of kin over the past few weeks without having to go through the normal process.

“The total amount of claims paid to the next of kin to date stands at approximately RM14.2mil out of a total exposure of RM18.7mil. A total of 184 policies were issued by life insurance companies in Malaysia.

“The balance of RM4.5mil in claims is pending the official submission of documentation by the next of kin,” he said in a statement, here, Thursday.

Kwo said they understood the grief of the family members and were ready to pay out faster and make it easier for them to make their claims.

“We have waived the requirement of death certificates, and setting this as a top priority and we have put in our best efforts to pay out the claims within a week from the receipt of full documentation of the claimants.

"We encourage family members to get in touch with the respective insurance companies and submit your claims. If they are unsure if their family members onboard had purchased life insurance, they may contact the LIAM hotline at 03-26916628 which handles queries on MH370 claims’ procedures,” he said.

Kwo said member companies of LIAM once again would like to express their support in light of the events that unfolded with regard to MH370, the crew and passengers onboard.

“We would also like to commend the Malaysian government, its various agencies, MAS and its international collaborators for their tireless search and rescue efforts,” he added.

On March 8, the Beijing-bound Boeing 777-200ER aircraft with 239 passengers and crew onboard disappeared from radar screens about an hour after leaving the KL International Airport at 12.41am.

Seventeen days later, the flight path of MH370 was believed to have ended in the southern Indian Ocean.

An ongoing massive search for the missing aircraft has found nothing, so far. – Bernama 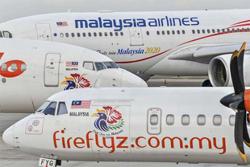 Keeping Malaysia Airlines up in the air