Australian Prime Minister Tony Abbott is seen during a House of Representatives question time at Parliament House in Canberra, Australia, 20 March 2014. Abbott during his speech stated that Australia will take control over the 'southern vector' carrying its duty in the search and rescue operations (SAR) for the missing Malaysia Airlines flight MH370. According to media reports, objects possibly related to SAR operations of MH370 have been spotted in the southern Indian Ocean by satellite, Abbott told parliament. EPA


He said an Australian air force Orion had already been diverted to look into the objects with three more surveillance planes to follow. He did not specify where they were but Australia has taken charge of the search in the southern Indian Ocean. 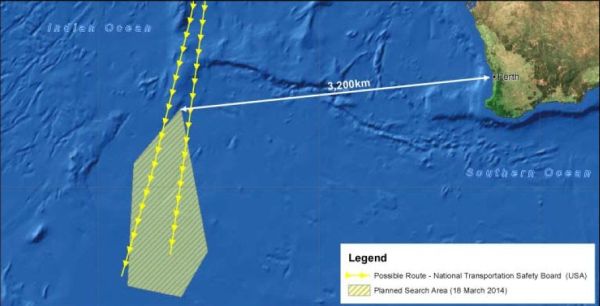 "Following specialist analysis of this satellite imagery, two possible objects related to the search have been identified."

But he warned against drawing any premature conclusions.

"We must keep in mind the task of locating these objects will be extremely difficult and it may turn out that they are not related to the search for flight MH370," he said. Authorities in Kuala Lumpur on Monday asked Canberra to take responsibility for the "southern vector" of the operation to locate the Boeing 777, which disappeared on March 8 en route to Beijing with 239 passengers and crew on board.

The Malaysian government believes the jet was deliberately diverted and flew for several hours after leaving its scheduled flight path - either north towards Central Asia, or towards the southern Indian Ocean.