JOHOR BARU: The air pollutant index (API) in Muar has spiked to 746 as of 7.00am, which is more than twice the standard hazardous levels according to the Department of Environment website on Sunday.

Johor Health Department director Dr Mohd Khairi Yakub said that health officials including ambulances were on standby in case of any emergency due to the haze.

"We have no absentees in Muar today and we are ready for any incident including accidents which may occur due to poor visibility on the roads.

"In the meantime, I advise all residents to stay indoors, no excuses," he said when contacted on Sunday.

He added that heading outdoors even with facemasks on was not advisable.

According to the Department of Environment (DOE), any API reading above 301 is considered hazardous.

The last reading as of 4pm on Saturday showed that Muar had an API of 453.

All other areas in Johor also recorded API readings above the unhealthy level. 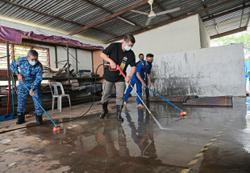