By IVAN LOH and AMANDA YEAP

The body of the late Sultan Azlan Shah being carried to be buried at the Makam Diraja Bukit Chandan in Kuala Kangsar.

THE year 2014 has been undeniably difficult for Malaysia, and Perak has not been spared from some tragedies either.

These included the passing of the late Sultan of Perak Sultan Azlan Shah and the mourning for Perak victims on the ill-fated Malaysia Airlines Flight MH17, to the recent flash floods that struck several areas, forcing more than 7,000 people to evacuate to safety.

However, there were some significant developments like the announcement of the state’s first IT mall and new property developments in the city and towns.

MetroPerak highlights some notable events in the state in 2014. 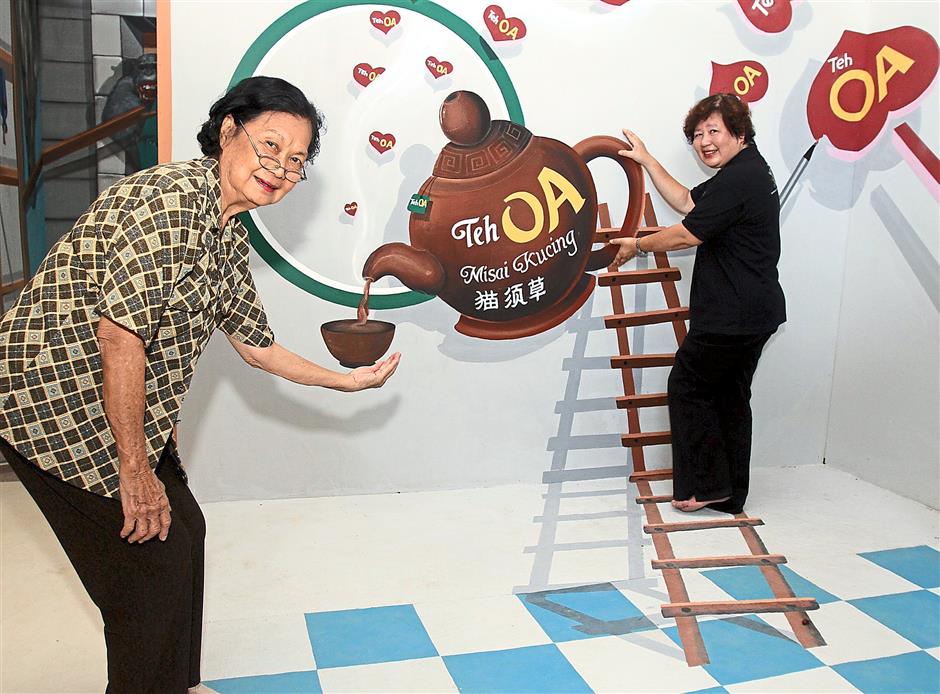 The 3D drawings at the exhibition held at Kwan Yin Tong Temple were very realistic.

> The year started with new beginnings for the Ipoh City Council as Datuk Harun Rawi was appointed as the ninth mayor after the retirement of Datuk Roshidi Hashim. The council also appointed 11 new local councillors and retained six others.

> The Kwan Yin Tong Temple in Ipoh became an art gallery for a one-of-its-kind 3D art exhibition, believed to be held in the city for the first time. The artist Goh Ang Kuan said the exhibition was held to promote tourism.

> A father and son were killed when the Perodua Kelisa they were in crashed into a carcass of a cow along the Ipoh-Kuala Lumpur trunk road near Tapah. The accident also caused a four-car pile-up.

> The Perak FA (Pafa) sent two teenagers to Australia for a two-week trial with A-League outfit Newcastle United Jets. Pafa also signed a Memorandum of Understanding with the New South Wales Club, working with each other to share experiences and ideas.

> A Ipoh court clerk was caught pilfering money daily from its accounts and has pocketed about RM1.5mil from her crime spree after the matter came to light during an auditing exercise. She was suspended after the court lodged a police report and has been charged.

> SMJK Sam Tet wrote themselves into the Malaysia Book of Records after producing the longest calligraphy work in the country. The calligraphy work, which was completed by 1,000 pupils within five days, contained about 4,000 Chinese characters and was about 2.5km-long.

> The Perak Fire and Rescue Department was put on full alert as rising temperature has caused peat fires. One of the most badly hit areas included a 60ha land near Tasik Bersia in Gerik. A bushfire also consumed more than 4ha of forest on the slopes of Gunung Tempurung located near the Sungai Siput Selatan new village in Kampar. Forest and peat fire incidents continued into March.

> Flags were flown at half-mast throughout the state as a mark of respect for the passengers and crew on board MH370, which went missing on March 8.

> The Perak police also began a recruitment exercise to encourage Chinese youths, both male and female, to join the force as constables. This was in tandem with the mission of the Royal Malaysian Police to recruit at least 5,000 Chinese people nationwide.

> Two college students drowned on March 20 after they went missing with another two friends on Gunung Bubu in Kuala Kangsar four days earlier. 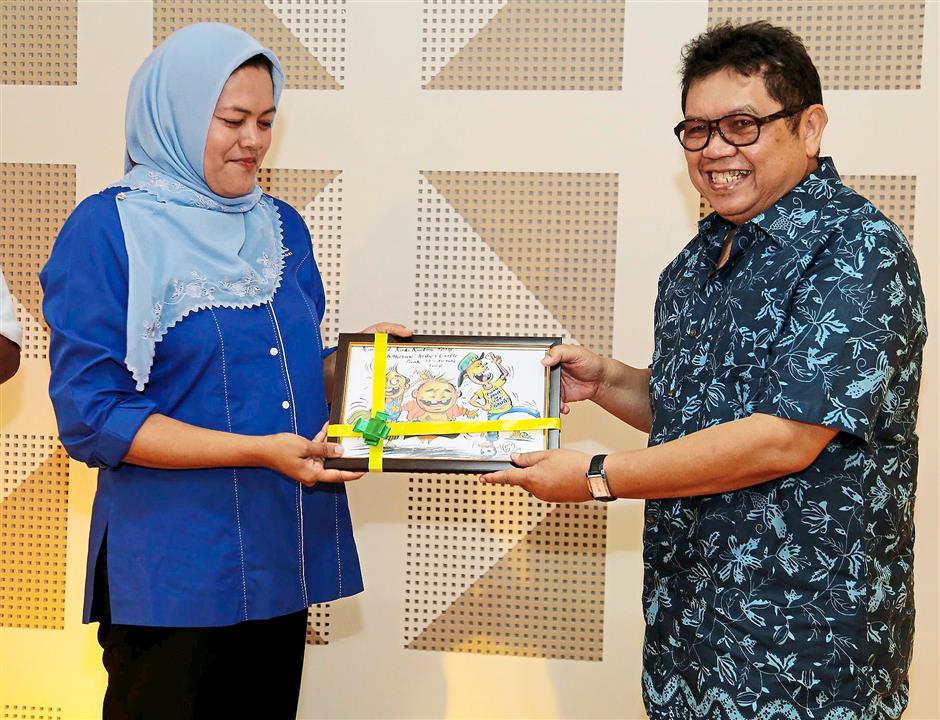 > Datuk Mohd Nor Khalid, or more popularly known as Lat, received an award at the Kaki Kartun Carnival in recognition of his contribution to the nation’s cartoon industry. The cartoonist from Perak published his first comic book in 1964.

> The month was a heart-wrenching time for the family of Karpal Singh as the Bukit Gelugor MP and veteran DAP leader met his untimely death when the Toyota Alphard he was travelling in collided into the side of a five-tonne lorry near Gua Tempurung on the North-South Expressway on April 17. 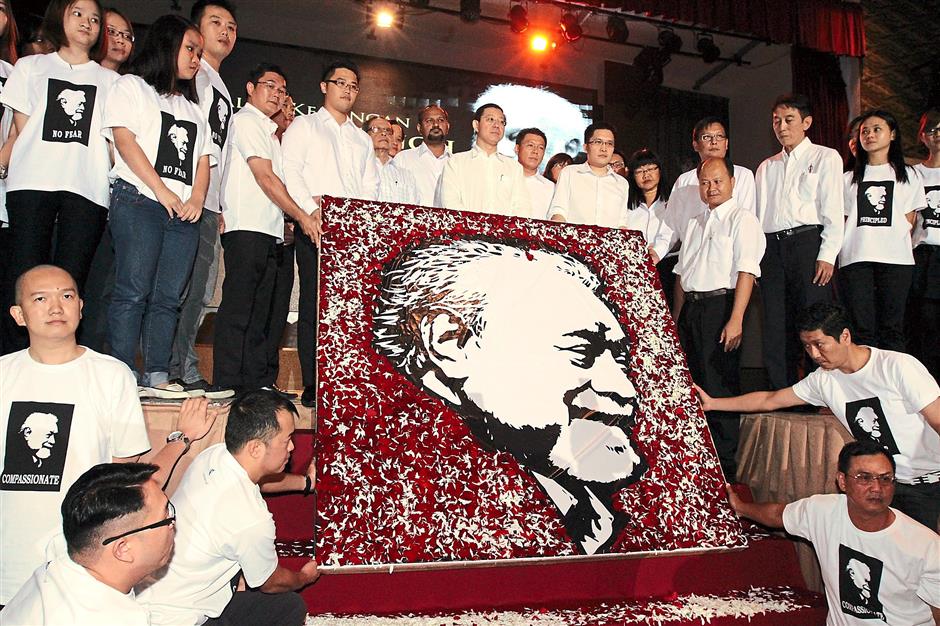 Senior DAP leaders together with the late Karpal Singh’s fans posing with an artwork featuring his portrait during a memorial dedicated to the lawyer and outspoken leader.

> Around the same time in a different incident, Paloh assemblyman Datuk Nozula Mat Diah from Kelantan, lost his wife in a road accident along Jalan Cameron Highlands-Simpang Pulai.

> The beginning of the month saw DAP losing yet another leader, Teluk Intan MP Seah Leong Peng, who passed away due to cancer on May 1. Following his death, the Election Commission set May 31 as polling day for the Teluk Intan parliamentary by-election, where Barisan Nasional’s Datuk Mah Siew Keong and DAP’s Dyana Sofya Mohd Daud found themselves as rivals for the seat. Mah won the seat with a 238 majority.

> On May 28, Perakians were once again shaken by another loss, when the late Sultan of Perak Sultan Azlan Shah passed away at the age of 86. He was laid to rest at the Royal Mausoleum in Kuala Kangsar. During the first seven days of the mourning period, all forms of entertainment, festivity and celebration were cancelled.

The state flag was flown at half-mast for 100 days.

> The month spelt continuous distress for kindergarten teacher M. Indira Gandhi, as her hopes to be reunited with her youngest child by June 6 were dashed. Her Muslim convert ex-husband Mohd Ridzuan Abdullah had defied a court order to return their youngest child by noon, despite being given a grace period of one week. > As citizens struggled to recover from the first shock of the missing flight MH370 in March, a second tragedy unfolded — the shooting down of yet another MAS airline MH17, which was flying over eastern Ukraine at the time. Four on board the plane were from Perak.

> Earlier in the month, the KM200 stretch near Kamunting, along the North-South Expressway, had claimed six lives in two separate accidents within a span of two days. On July 5, a teenage mother and her eight-month-old baby boy were killed along with a cement truck attendant when a lorry transporting gas cylinders collided into the back of the truck. Around the same spot the next day, three people were also killed after the 4WD vehicle they were in lost control due to a burst tyre, and landed on its side near a trench. The Muhammadiah Mosque in Taman Tasek Jaya in Ipoh was opened by Sultan of Perak Sultan Nazrin Shah.

> Aug 22 is now an important date to remember as it has been declared a national day of mourning for victims of MH17, when the remains of the first 16 victims — 15 Malaysians and one Dutch national — were brought back to Malaysia on a special flight. Perak received the remains of four victims, stewardess Chong Yee Peng from First Garden in Ipoh, chief stewardess Azrina Yakob from Taiping, First Officer Muhamad Firdaus Abdul Rahim from Teluk Intan and passenger Rahimmah Noor from Tambun in Ipoh. 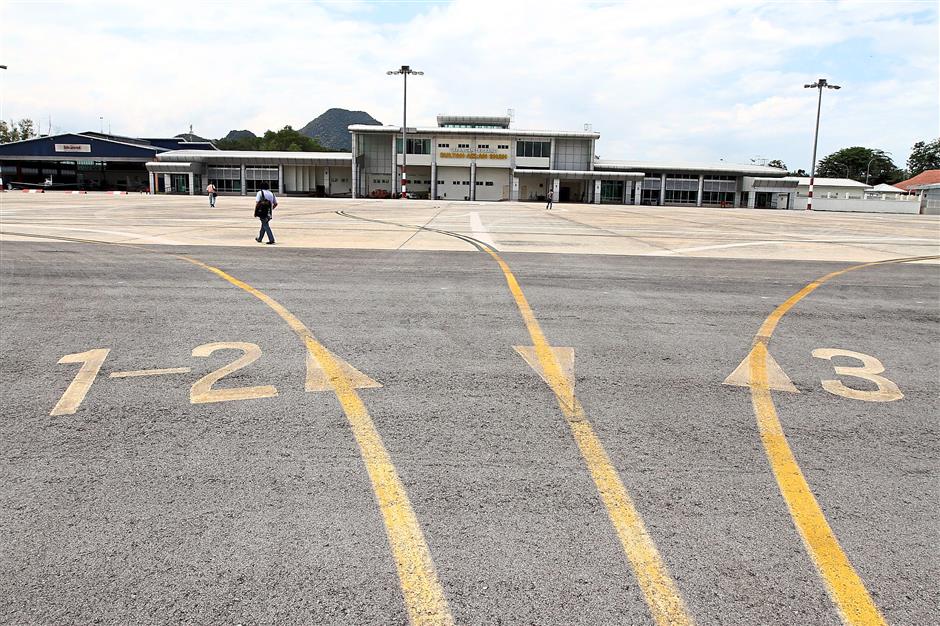 The Sultan Azlan Shah Airport in Ipoh has been declared safe for the landing and take-off of bigger aircrafts, as the sinkholes that appeared last year were normal sediments.

> The Sultan Azlan Shah Airport in Ipoh was declared safe by the Transport Ministry to accommodate Airbus 320 and Boeing 737 aircraft, nearly a year after “sinkholes” were found on its runway.

> Seven-year-old Puteri Rabiatul Adawiyah Mat Zaki represented the country in the 10th Asian Chess Championship, in Taiwan. Prior to her journey to Taiwan, she had met with Perak Mentri Besar Datuk Seri Dr Zambry Abd Kadir, who presented her with RM5,000 as part of the cost for her trip.

> Perakians can also look forward to having a one-of-a-kind mall that specialises in information technology products and services next year. A ground-breaking ceremony was officiated by Deputy International Trade and Industry Minister Datuk Lee Chee Leong at Tasek Square, Ipoh for the mall.

> Mentri Besar Dr Zambry was presented with the Medallion of the City of Sarajevo for his commitment to strengthening relationships between the silver state and Sarajevo.

He received the medallion from Sarajevo mayor Dr Ivo Komsic in a ceremony here on Sept 26. 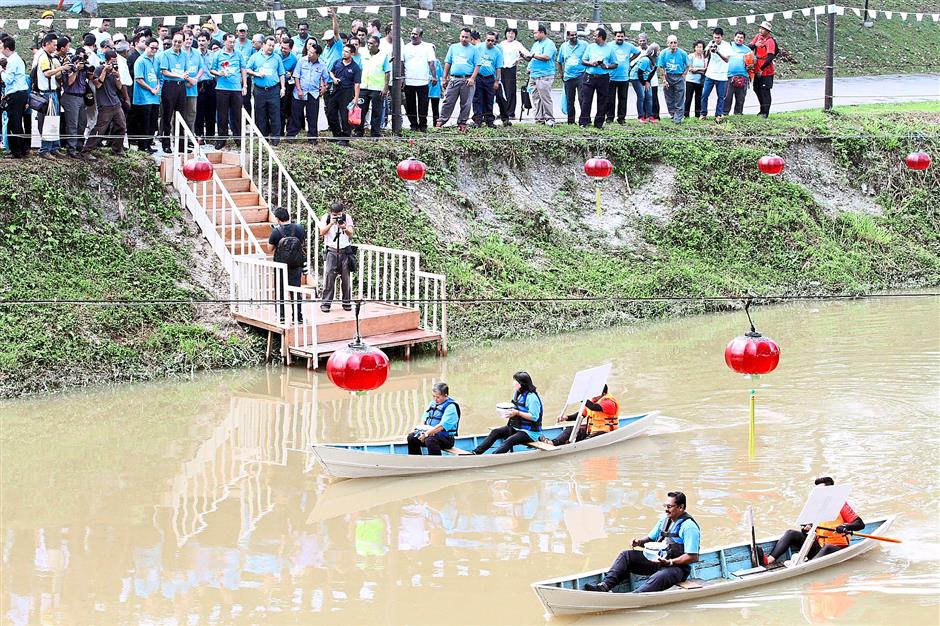 Representatives of the community around the three tributaries of Sungai Kinta - Sungai Senam, Sungai Kledang and Sungai Buntong being ferried on boats to release freshwater fishes into Sungai Kinta during the River Carnival.

> The state held its very first River Carnival at Sungai Kinta on Sept 28. Participants of all ages took part in various activities aimed at building awareness on protecting and conserving the country’s key source of life.

> Following on Indira Gandhi’s long-standing quest to get back her youngest child, the High Court granted her a mandamus order to compel Inspector-General of Police Tan Sri Khalid Abu Bakar to arrest her Muslim convert ex-husband on Sept 12. In a landmark ruling, Justice Lee Swee Seng said the order was to be executed within seven days from the aforementioned date. However, the Attorney-General’s Chambers filed an appeal against the mandamus order on Sept 18.

> The month began on a happy note for Dr Zambry as he was named as a recipient at the Global Islamic Finance Awards (GIFA) 2014 for his efforts in introducing Yayasan Bina Upaya Darul Ridzuan to assist the poor and eradicate poverty in the state. He received the award during a special gala dinner in Dubai that was attended by over 300 global leaders and key players in the Islamic financial industry. 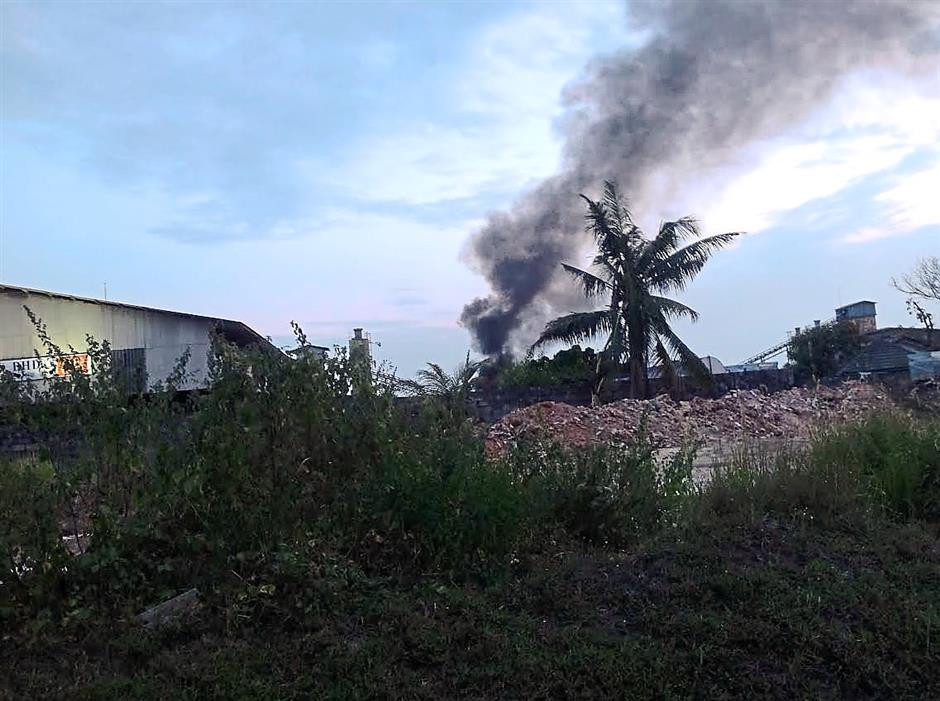 Bandar Seri Botani residents have had to put up with awful pollution, such as smoke billowing from a tyre factory in Simpang Pulai.

> Bandar Seri Botani, Ipoh, was plagued with the stench of burning tyres from factories producing industrial oil. Simpang Pulai assemblyman Tan Kar Hing said residents have been putting up with the foul smell and smoke, which possibly contained dangerous levels of dioxin and furan, for years. Promising swift action in the interest of public health, the state government had issued a suspension order on these factories.

> The month saw the death of several prominent figures. Among them were former national badminton player Tan Jin Eong. Tan, 87, who won the Thomas Cup in 1955, died of end-stage renal failure.

> Another well-known person who passed away was 89-year-old Datuk Yeoh Kian Teik, the father of international superstar Tan Sri Michelle Yeoh. Yeoh, a prominent lawyer and the man behind the popular bus express company Seri Maju, was given a grand send-off as his casket was carried by over 100 people through the streets of Ipoh. General Operation Force personnel standing guard near foreign workers who were rounded up at a flower farm in Blue Valley, near Cameron Highlands.

> As the rainy season arrived, Cameron Highlands was hit. The Ringlet new village was inundated with mud water and several areas in the highlands were also hit by landslides.

The disaster caused the death of five people, including a 13-year-old boy, and many properties were damaged. Following this, the Federal Government ordered for a “cleaning up” operation at the highlands to clear illegal farms built on government land. The operation also saw hundreds of illegal immigrants being nabbed, causing problems for the local farming industry.

> The state police arrested several members of the notorious Mamak Gang, including their 50-year-old mastermind, and shot dead one. The gang was involved in violent crimes that included armed robberies and stealing luxurious cars.

> On Dec 14, The 1Malaysia Sikh Fest — Punjabi Cultural Extravaganza, organised by the Malaysia National Sikhs Movement (GerakSikh), was held in Ipoh for the first time. The event graced by Sultan Dr Nazrin Shah saw performers from India such as Harbhajan Mann, Deep Money and Rimz J singing and dancing to the beat of the bhangra music and dhol.

> It was a wet Christmas as torrential rainfall caused flash floods in Manjoi, Klebang, Kerian, Lenggong, Sungai Siput and most areas in the Batang Padang and Hilir Perak districts. 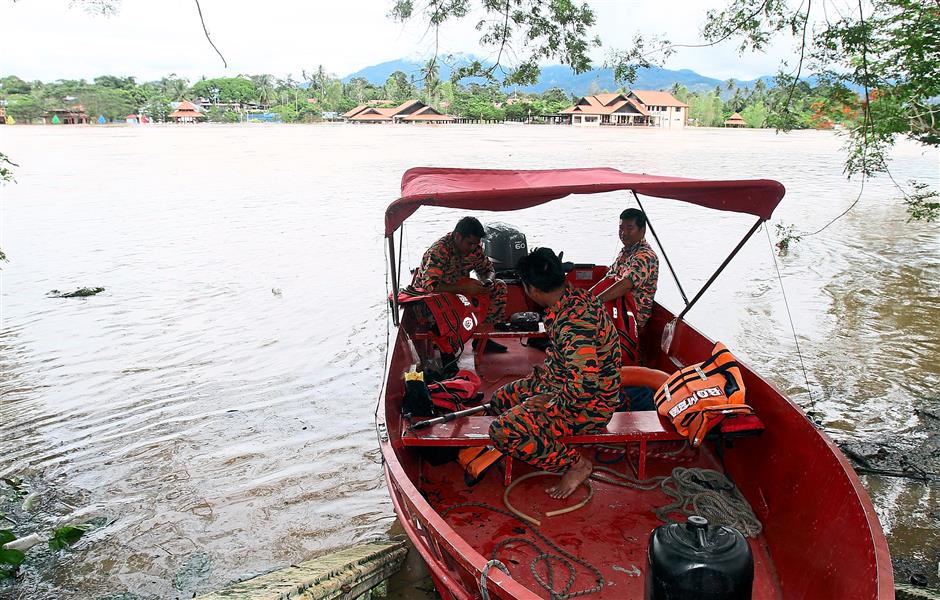 Fire and Rescue Department personnel preparing to evacuate flood victims along the Sungai Perak riverbank in Kuala Kangsar. In the background is the flooded Pesisir Sayong recreation centre.

Thousands of people were evacuated from their houses and moved to temporary shelters prepared by the state National Security Council.