Making half-boiled eggs is not rocket science. It’s just about timing, which means you have to watch the clock.

But back in the days when Datuk Hew Ah Kow was just a lad working as a bulldozer operator in the jungles of Kelantan in 1973, there was little time to keep count of the minutes.

“There were about 20 of us in a lumber camp who liked nothing better than to start the day with half-boiled eggs. The problem was, we always lost track of time, carried away with things like checking the engines and refuelling. So, by the time we got back to our eggs, they were always overcooked,” recalls Hew.

The quest for the perfect half-boiled egg at the work camp where he worked was constant. As Hew also happened to be the youngest, the older workers entrusted the native of Kampung Bukit Gelugor, Kuala Pilah to find a solution.

“They said, ‘Since you are so smart, you think of something.’

“Young and full of bravado, I took it as a challenge and began to conduct my own experiments, puncturing the bottoms of Ovaltine cans with a nail and filling them with eggs and hot water,” says Hew.

It took a year before Hew found the correct ratio of water to eggs. As he drew closer to a solution, Hew’s tests made him go off eggs. It also affected his colleagues who had to help eat his experiments. 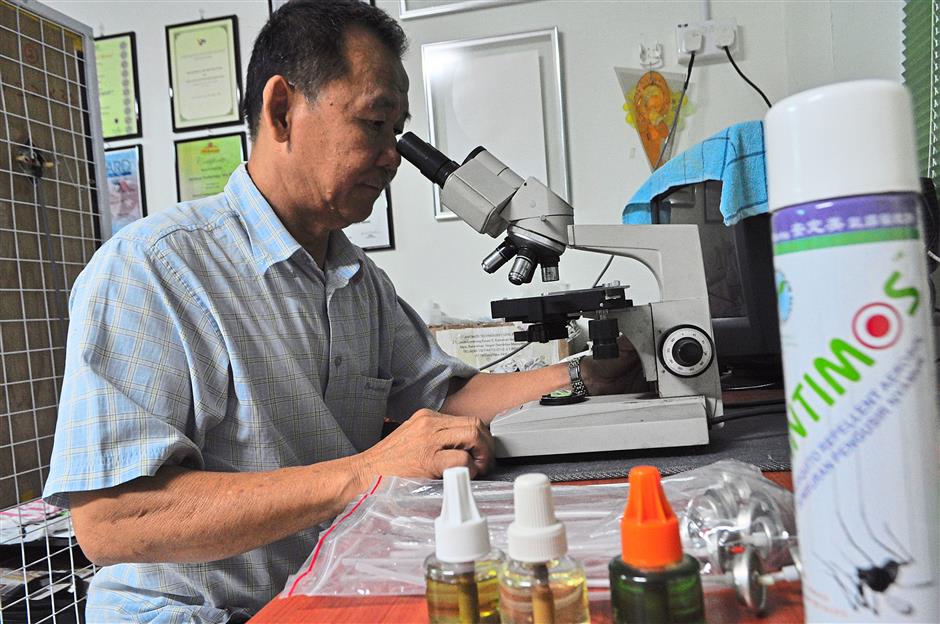 Armed with only a primary school education, Hew developed the formula for his mosquito repellent from scratch.


“I had the most time during the rainy seasons when we had to stop work or risk getting our machines stuck in the mud. While the rest were playing mahjong, I’d bring out the Ovaltine cans and three or four of us would get cracking. One or two would boil two to three litres of water, another would crack the shells while I recorded the test results. In moments of frustration, my colleagues would say, ‘Aiyah! No need to continue anymore. There’s nothing you can do about it.’ But because my pride was at stake, I continued,” says Hew.

The effort eventually paid off when one day, a direct-selling stockist rode his Honda Cub into Hew’s work camp and got marooned by the rain, forcing an overnight stay. At breakfast, he got to sample the most perfect half-boiled eggs he had ever tasted.

“It was the camp cook who pointed me out. At first, he came to me and asked if I could give him one of my Ovaltine cans to take home. I said ‘No way.’ Then he asked if I could sell him the prototype so I said, ‘Fine, let me see the money first.’ He returned and gave me RM7,000,” recalls Hew.

The stockist eventually took the prototype further by taking it to a plastic manufacturer, mass producing it under the brand Newton Egg Maker.

“I was only 20 at that time. I didn’t know about commercialisation or patenting, but when I realised how well my idea had been accepted, it opened my eyes to a world of possibilities,” says Hew, now 59.

From that moment on, ideas flowed. He has since created a second version of the egg maker that features a dial that allows users to decide on their egg’s doneness. Hew Ah Kow’s other inventions include a hanger, egg breaker and puzzle cube.


In 1988, Hew acquired the international patent for the device. Other inventions included a toothbrush with an built-in tongue scraper, a palm oil fruit bunch cutter and a clothes hanger with clips for high-rise homes. All the patents, he says, were sold off for at least RM25,000.

“I’d say my inventions have enjoyed a success rate of 90% in sales since I started. There were some duds along the way, like a puzzle modelled on the Rubik’s Cube in 1991 and an egg opener in 1980,” says Hew.

From his eggy genesis, Hew is now into mosquitoes — repelling them, that is. Called Antimos, the idea of an all-natural mosquito repellent was also born from his jungle days, when a colleague’s mosquito net caught fire from a burning mosquito coil one night. After the commotion had died down, it crossed his mind how much safer life would be if there was such a thing as a mosquito coil that did not require lighting up.

After years of research, most of which saw Hew seeking advice from the Orang Asli on the natural ways of keeping mozzies at bay, he took his compound to University Sains Malaysia to have it certified non-toxic.

By 1997, a factory for making the repellant was built in Rawang with a financial grant of RM3mil from the Malaysian Technology Development Corporation (MTDC). The next year, he received another grant of RM180,000 for research and development.

It is interesting to note that Hew also returned the unused funds totalling a few hundred thousand ringgit, which explains his good track record with MTDC.

“The idea of mosquito repellent is not new but back then, the market only saw products which contained Class 4 poisons whereas mine was fully natural. Because it was a new concept, I did suffer for some seven to eight years, but eventually, Cosway became my first customer and later Jusco (now AEON Big) placed an order of 75,000 units,” says Hew.

Meanwhile, Hew is also working on marketing another invention — electrical sockets that will not switch on without a plug.

“I saw with my own eyes a child thrown three feet after coming in contact with a socket with the switch on that had been left unplugged. He had come in from the rain and his t-shirt was wet. Luckily, he was wearing shoes or he’d have been electrocuted for sure,” reveals Hew on how he came up with the idea.

The HAK Smart Socket won numerous awards between 2007 and 2008, including a gold medal in the International Invention and Innovation Exhibition. It has also been used in a housing project by Tan Yew Lai Development.