Back lanes are not typically the most appealing of places — especially the dark and narrow ones.

But in Jalan Kampung Cina, the little alleys you find between old shoplots have become the star attractions of Kuala Terengganu’s Chinatown.

What started off as a mission in 2005 by Datuk Toh Chin Yaw, the then Bandar state assemblyman, to make the alleys in Jalan Kampung Cina cleaner and more pleasant for pedestrians, has turned into a beautification project.

As a result, seven lanes along the road have been given a makeover and each of them has its own unique theme. Turtle Alley is the narrowest of all the alleys in Jalan Kampung Cina. It has trivia boards to inform tourists of the highly endangered turtles.

The most popular is “Turtle Alley”, a narrow lane at the end of Jalan Kampung Cina which has been adopted by the local turtle conservation society and features turtle-themed artwork on its wall.

Take a walk along Turtle Alley or any of the other specially-decorated lanes and chances are you will stumble upon tourists, local and foreign, posing for photographs along these narrow passageways.

“The idea at first was to make these alleyways clean and well-lit at night so that people can walk through them and feel comfortable and safe,” said Toh, who is also the Terengganu MCA chairman.

“The first to receive a makeover was “Green Lane” or “Lorong Mesra Alam”, which links one to the Chinese village behind the shoplots.

“We cleaned it up, put some plants and installed proper lighting. There is also a small garden along the alley, hence its name, Green Lane.

“This gave birth to more ideas for the other alleys and slowly it became a mission to transform these little lanes into tourist attractions,” said Toh. 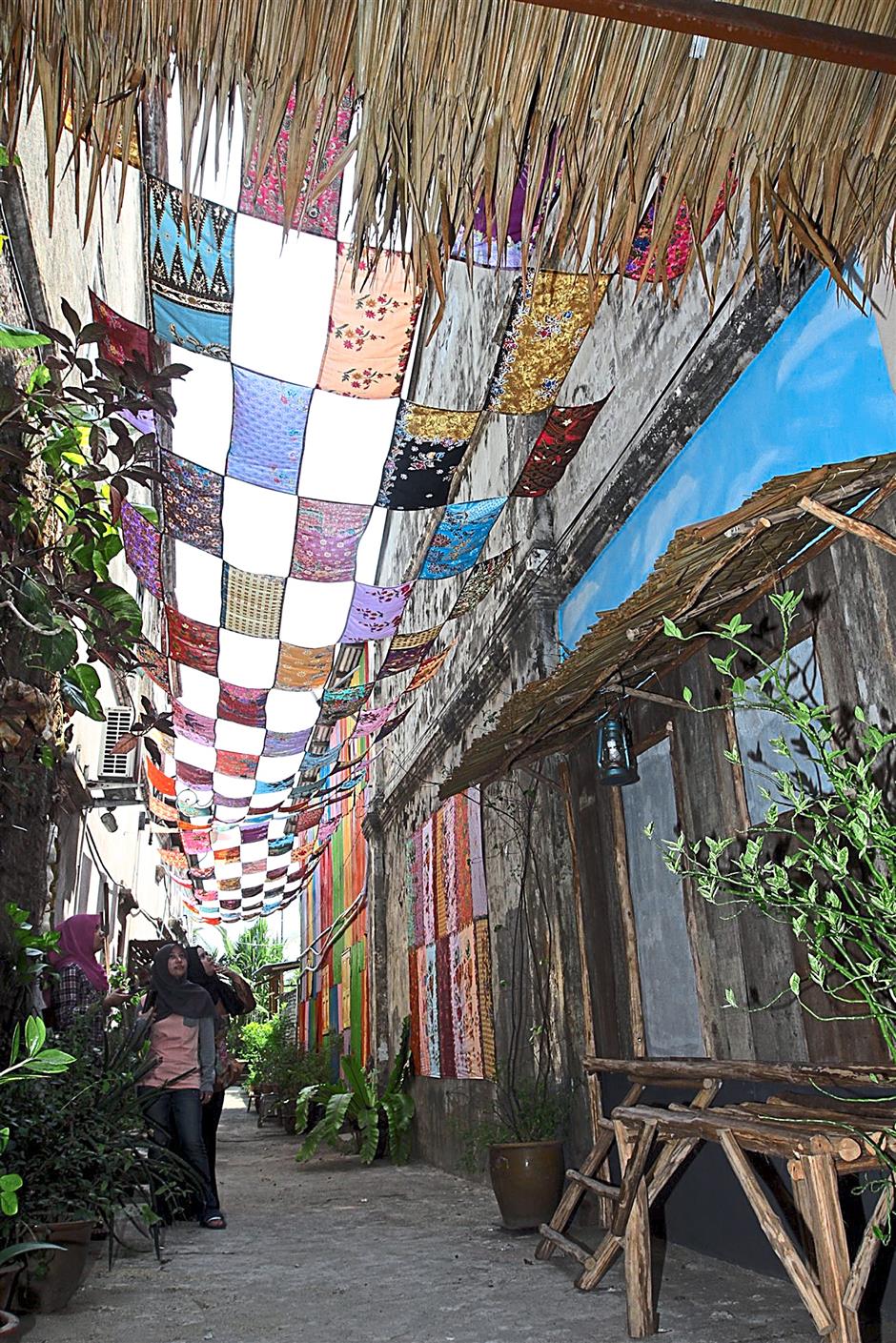 Eco Lane is a tribute to Terengganu batik as one of the business owners there has decided to decorate it with pieces of batik.

This is a long-term project and the lanes are given a makeover from time to time.

Recently, “Eco Lane” and the “Payang Memory Lane” saw new additions in the form of batik cloths and colourful umbrellas.

“The new additions were put there by a business owner on his own initiative and he acquired the items himself.

“The local community here are very interested in coming up with their own ideas on how to make these alleys even more attractive.

“Our Chinatown is not big compared to others due to the small number of Chinese residents here. But we try to make it livelier than the other Chinatowns around the world,” said Toh. Pose for photographs at Tauke Wee Sin Hee Cultural Lane which has a collection of vintage items such as colonial-era telephone booth and a classic post box (still in use).

“The alleyways are beautiful and I feel comfortable and safe walking through them.

“It is a unique attraction and I have not come across something similar in my travels elsewhere,” said Andrea Price, from Canada.

If you begin your “Chinatown alleyway trail” from here, the first alley you will come across is the famous Turtle Alley.

Opened in 2011, Turtle Alley is the narrowest of all the alleys in Jalan Kampung Cina but it is one of the most important passageways there, serving as a shortcut from Pulau Warisan to the heart of Chinatown where the main eateries are.

It is also the most well-known of the alleys, and visitors who enter the lane via Pulau Warisan will be greeted with a life-sized replica of a leatherback turtle.

The walls and floor have turtle-themed mosaics as a tribute to the sea turtles, the state mascot.

The local turtle conservation society has put up informative “trivia boards” to educate readers on the highly-endangered turtles.

A children’s storybook written by turtle conservationist Dr Chan Eng Heng has also been replicated in the form of wall mosaics. The story describes why eating turtle eggs is wrong. The makeover project started with Green Lane but it is probably the least visited by tourists.

Decorated with various kinds of plants including bamboo shoots, the Green Lane is probably the least visited by tourists but is still one of the most important as it was the first to kickstart the makeover project.

This lane is named after a wealthy Chinese trader from the 1900s whose former shop is just next to the alleyway.

Posing for photographs in this alley is a must as the collection of vintage items are very interesting.

It includes an old, colonial-era telephone booth and a classic post box (still in use) which are painted in bright red and made of cast iron.

One wall displays a collection of old signs from shops in Chinatown, while the wall across it displays several Han Dynasty-era poems, painted beautifully by a local Chinese calligraphy enthusiast. 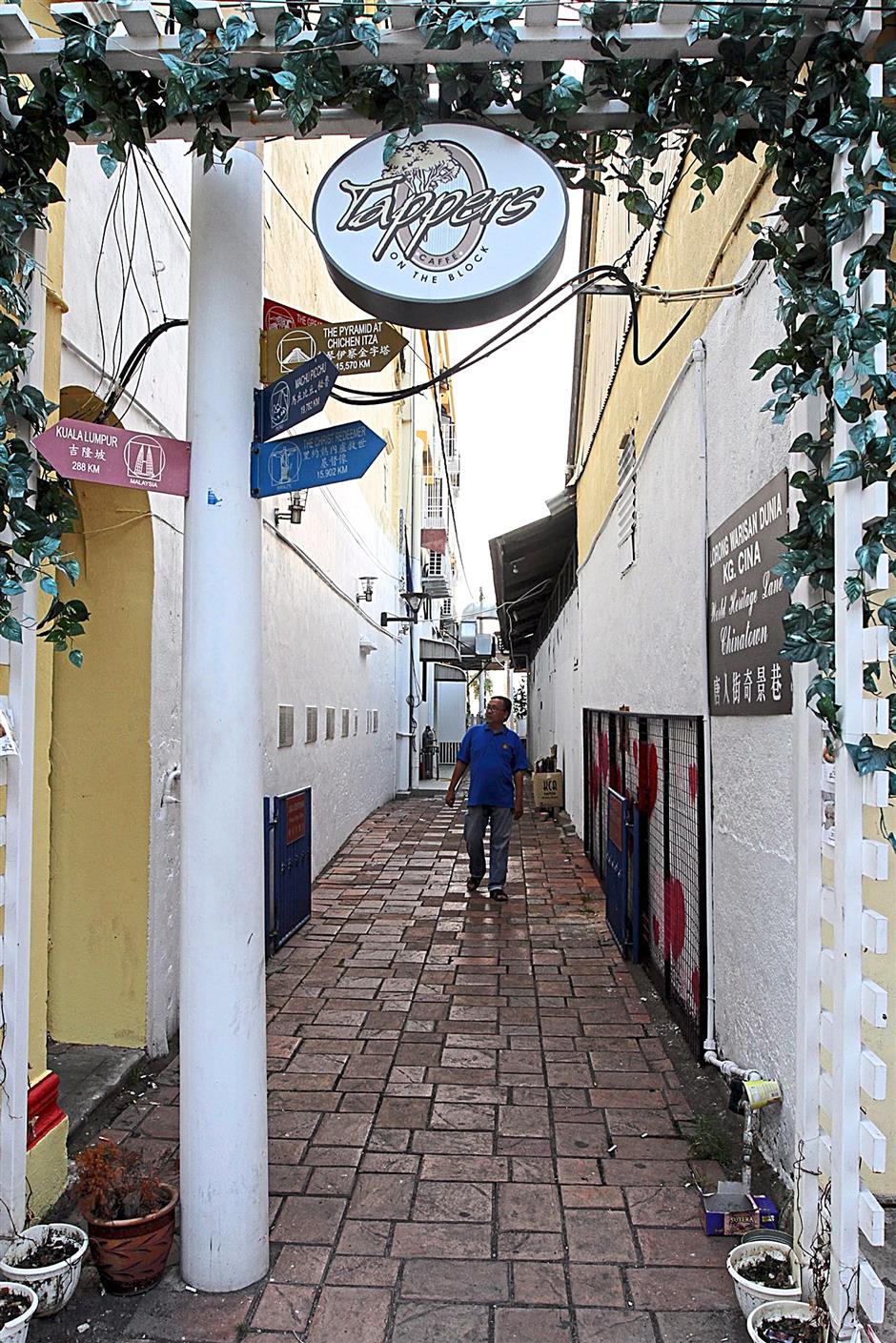 Seven Wonders Alley pays tribute to the seven wonders of the world.

This alley, which leads to a popular cafe that faces Pulau Warisan, pays tribute to the seven wonders of the world — Great Wall of China, Petra, Jordan; Christ the Redeemer statue, Brazil; Machu Picchu, Peru, Chichen Itza, Mexico, Colosseum, Italy; and Taj Mahal, India. The walls are adorned with steel plaques that describe each of the seven wonders.

There is also a lamp post which has been converted into a direction post, which tells you how many kilometres away you are from Taj Mahal and the other seven wonders.

This alley, as the name suggests, was initially designed to be similar to Green Lane.

However, one of the business owners whose shop is near the lane, decided to use his own resources and decorate the lane with batik cloths.

It is a tribute to Terengganu batik, which has its own distinct design that sets it apart from other batik styles. Payang Memory Lane pays tribute to Chinese community leaders of Kuala Terengganu with face casts of seven leaders. Colourful umbrellas hung over the lane have also made this alley a popular place for a photo op.

The name “Payang” is taken from the nearby Pasar Payang market, which is a famous shopping spot for traditional handicraft and fresh produce.

The lane pays tribute to the Chinese community leaders of Kuala Terengganu. On the wall are face casts of seven leaders, including the first state MCA chairman in 1956, Datuk Tan Eng Ann.

Recently, the lane was spruced up with colourful umbrellas that are hung above the lane, making it the newest photo-op spot in Chinatown.

The umbrellas are supposed to symbolise how the local community is “united in diversity”. Lorong Haji Awang Besar serves as a reminder of the small Malay population that also settled in Kampung Cina.

Decorated with Malay-style wooden architecture, this lane is named after a rich Malay businessman whose former village house was located near the lane.

One of the highlights is an old wooden door from Haji Awang Besar’s house, which was donated by his family.

The Malay-themed lane also serves as a reminder of the small Malay population that settled in Kampung Cina.

Although the Malay village is no more, there are still a few Malay businesses in Chinatown, including goldsmiths and clothing stores.

Opinion , talk of the town