THE string of five islands which constitute the 50 sq km Tunku Abdul Rahman Marine Park is only a 15-minute boat ride from Kota Kinabalu’s downtown area.

For years, the islands with their pristine beaches and waters teeming with marine life, have been a convenient getaway for city residents.

Those wanting to experience an untouched tropical forest, a trek through the hilly terrain of the biggest island of Pulau Gaya and nearby Pulau Manukan would be just the thing.

Pangolins, monkeys and even wild boar have been spotted along the 20km of trails on Gaya while hornbills can occasionally be seen flying overhead.

The highest point of the island is about 300m and the hills gradually slope towards a secluded and sandy beach, among the more popular being Police Beach that faces the South China Sea.

The second largest island in the park is Manukan, which like Gaya, is forested and surrounded by coral reefs that are ideal for snorkelling and diving. The other islands that make up the marine park are Mamutik, which is closest to the mainland, Sulug noted for an extensive coral reef and Sapi just adjacent to Gaya and featuring 5km of nature trails.

At low tide, it is possible to wade between Sapi and Gaya.

Indeed, the marine park is a microcosm of some of the best Sabah has to offer its visitors.

Over the years, the islands have become a major revenue earner and receives hundreds of visitors daily.

During school and public holidays, the beaches on the more popular islands such as Manukan and Sapi can become downright crowded.

Infrastructure at these islands have grown, too. 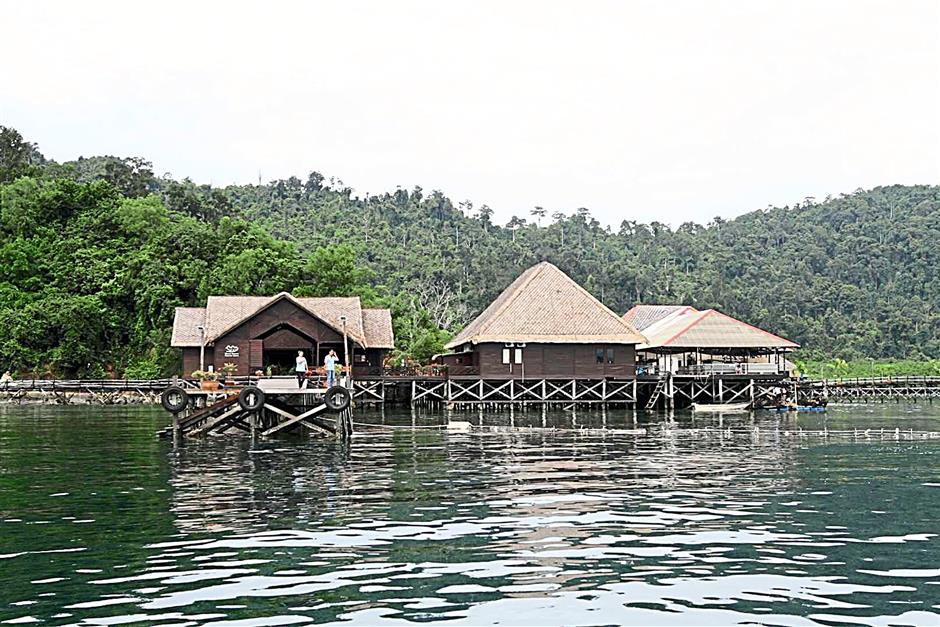 Visitors accommodation on Manukan island, once operated by Sabah Parks, has been privatised.

There are currently three upscale resorts at Pulau Gaya and a few years ago, a company began offering ‘sea walking’, snorkelling and diving from a pontoon anchored near Gaya island.

Visitors to the islands can also enjoy underwater “rides” by renting sea scooters at Manukan island.

The latest attraction at the marine park is the world’s longest island-to-island zip line — the bigger-scale version of the flying fox that enables users to traverse from the top to the bottom of a cable attached to a moving pulley.

The ever-expanding activities within the marine park have led to some questioning if the islands have reached a saturation point, in terms of visitor numbers and the infrastructure available. Some of the giant clam displayed at the Marine Ecology Research Centre at Gayana Eco Resort.

As more people flock to the islands, the marine park’s environment such as its coral reefs are bound to be impacted, he said.

“Do we want to see a situation similar to what is happening in Poring, which can get very overcrowded?” Doughty asked.

The Poring hotsprings at the foothills of Mt Kinabalu is another area under the jurisdiction of Sabah Parks.

Noting that the development or provision of facilities for visitors was important in any key tourism destination, he said there should be a masterplan for the marine park.

“It would be good to see the bigger picture of things to come there,” he added.

Sabah Parks’ Tengku Adlin said the norm was that not more than 50% of a park area be developed.

“We are well below that,” he said, adding that any visitor facility must be sustainable, socially responsible and economically viable.

Whatever attractions or activities allowed at the marine park has been aimed at enhancing it as a nature and adventure destination, Tengku Adlin said, adding that Sabah Parks was looking at how best to manage the marine park.

“We may limit the number of visitors allowed,” he added.