Catch them in sketches

EVERY first Sunday of the month, a group of sketchers would gather at a predetermined location to “see” Kuching one drawing at a time.

Off and on, the group has been gathering to sketch for over five years now. They comprise active members like Peggy Wong, Wee Hii Min and Azy Yanti, and together they form a core group of like-minded individuals.

Initially, Wong, an architect who was teaching at a college in 2009, organised a group to sketch Gambir Street Market, which was about to be demolished then. Within months of the market’s destruction, the state government announced plans to relocate Satok’s Sunday Market.

“When we first started, it really was just a couple of people going out and having something to do. It was a small group but it wasn’t (a) closed (group),” Wong told The Star earlier this month during a group sketch at Sarakraf Pavilion.

“It was at Sunday Market when someone suggested we should set something up in a more formal way. We started with a blog and we found a growing community of like-minded people.”

The group grew in size mainly with members who are motivated to jot down memories of familiar places that would soon become unfamiliar. In recent weeks, the group has also sketched at the Sarawak Buddhist Association headquarters, which is undergoing a massive renovation, and at the old Sarawak Legislative Assembly, which has seen better days.

“We do new buildings but I suppose I like older buildings because they have a certain kind of charm to them. Of course, there are issues with heritage (conservation) but some buildings, like this one (Sarakraf Pavilion), is quite well maintained,” Wong said.

The group nowadays communicate via a Facebook page, and is also associated with an international community of the same name.

And while the urban sketchers organisation might not be formal in the sense of the word, it is governed by a surprisingly well-developed set of guidelines.

There is a “manifesto” that defines what is urban and what is sketch.

Getting models to pose and drawing self-portraits are major no-nos.

The manifesto urges sketchers to “draw verbs, not nouns” — meaning sketchers should draw people “doing stuff in context” and not focus on “noses, faces, hands and feet”.

There is strong emphasis on location and direct observation.

Gabriel Campanario, a journalist and illustrator, is the founder of Urban Sketchers.

On his blog, he urges fellow sketchers to draw places that can be “put on a map”.

“Those beautiful vases of flowers or the bowls of fruit on your kitchen table are sure great subjects to draw, but do they tell me something about a place I can put on a map?” wrote Campanario in March last year in a post titled The Sprit of Urban Sketching. 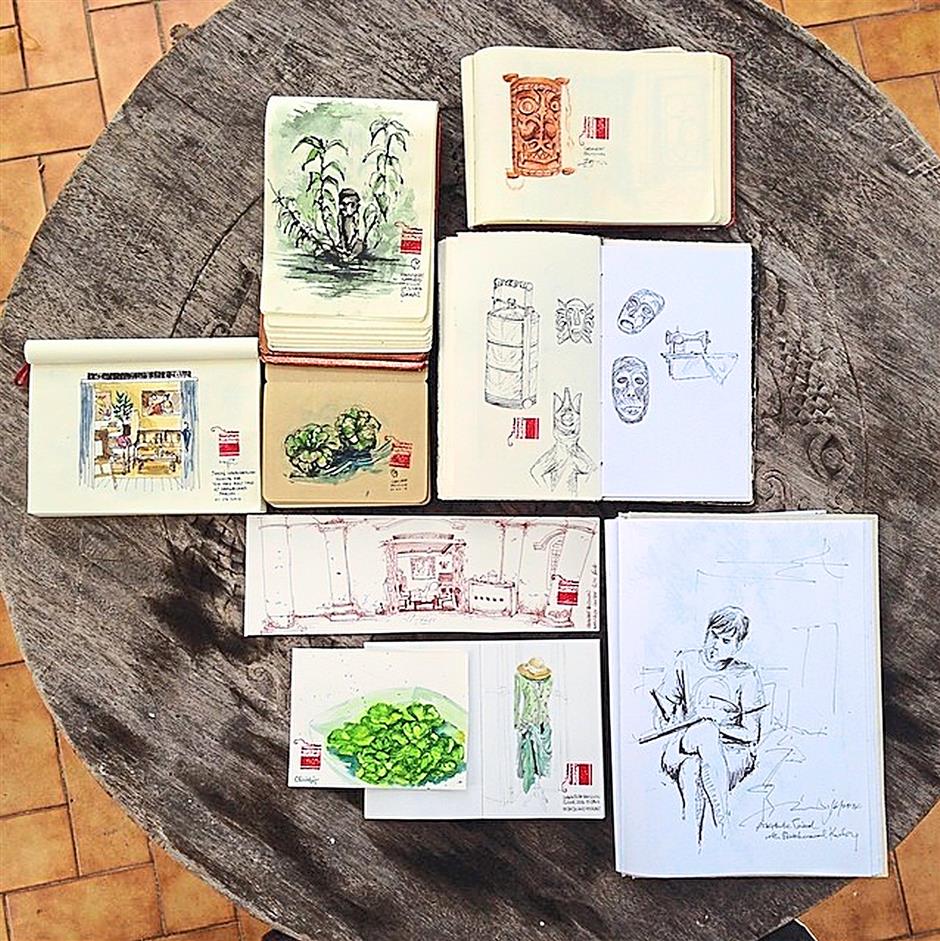 Artistic pieces: Sketches made during the group's visit to Sarakraf Pavillion in Kuching last Sunday.

Anyone who delves into sketchers’ discussions online will quickly learn the movement is like the artistic antithesis of the “There is an app for that” smartphone revolution.

Members hold dear to the possibility that a sketch (drawn quickly and usually with colour added in later from memory) can be a truer representation of reality than an easily manipulated digital photo.

“Having cameras on mobile phones mean you can take snap shots anywhere anytime. Sketching is more of a personal representation of the world. There isn’t even a right or wrong way to sketch,” Wong said.

Sitted across Wong on a marble table inside the pavilion (it was raining outside) was one of the group’s newest sketchers, Annette Chung.

Wong and Chung, who works in the stationary industry, were not familiar with one another but were bonding over their mutual interest. 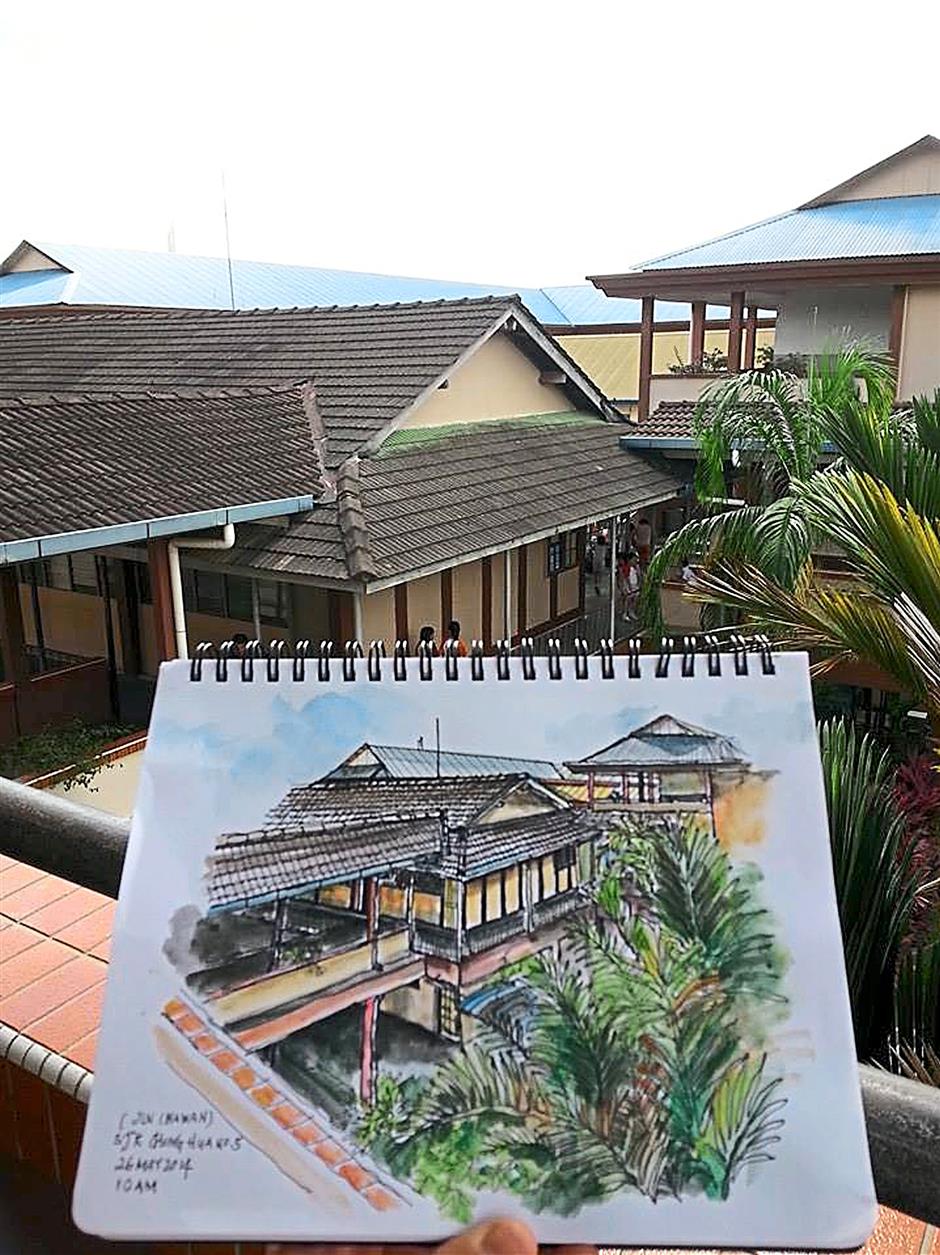 Representation: A depiction of SJKC Chung Hua No 5 Kuching by Yvonne Yeo, who sketched it during recess at the school.

Between them were their sketching kits. Wong said hers cost RM50 (12 water colours and a sketch book) and Chung said hers was the same too. They joked about how some people liked to make their hobbies expensive, but that in sketching, the most expensive gadget was only the humble easel.

Both also said they were not from particularly artistic families.

“I didn’t know how to draw until a few years ago. I couldn’t draw a straight line but I kept admiring all these other sketch artists’ work. So I started practising. My family gave me odd looks,” laughed Chung.

Wong attended drawing classes as a child but that said she “probably spent most of the time monkeying around and sharpening crayons”.

“What we are really talking about here is a discussion over nature or nurture,” Wong said.

“Like Chung, I didn’t like drawing when I was young. So is it nature or nurture? I mean, it’s got to be a bit of both right? It’s about passion. Chung liked it and that was enough to drive her here.”

There were about a dozen other sketchers there that day. Some were outside on the patio drawing plants while others stayed indoors and sketched the interior design of the pavilion. No two sketchers were drawing the same thing despite being within the same space and time.

“There has been a lot of debate on whether, when people sketch a teacup like a still-life piece, is that still urban sketching? It would not be if it’s sketched like a still life painting, but it is urban sketching if the teacup is in a setting with time and place. It wouldn’t be ‘life’ if it’s staged. So it boils down to context — what is the story you are trying to tell?” Wong said.

For Chung, her first time sketching with the group was also her first visit to the pavilion.

“If it’s not for this group, I won’t have come here,” Chung said, noting she was sketching a new experience.

In Chung’s journals, which contain most of her efforts, she has done about 200 sketches to date. To her, they are visual stories that depict her own life.