MORE THAN 10,000 devotees gathered at the Chempaka Buddhist Lodge in Petaling Jaya yesterday to offer their prayers, light lotus lamps and bathe the Buddha statue to mark Wesak Day.

Carrying flowers and candles, old and young devotees alike were seen at the 29-year-old temple with their hands clasped in prayer.

Two particularly long lines were formed at the Buddha statue bathing area and the blessing area where monks sprinkled holy water while reciting blessings to the devotees kneeling before them.

At the Buddha bathing area, nine statues of Buddha were set up in a line where devotees can walk past and pour holy water over them with a ladle.

“This is a new addition to the temple. Earlier, we only had one Buddha statue for the bathing ceremony placed at the other end of the temple,” said lodge deputy president Tan Kok Ing. 
Tan said this was the highlight this year, as having more Buddha bathing statues around would ensure all devotees get to do it on Wesak Day.

He added that Wesak is a day to commemorate the birth, enlightenment and passing of Buddha.

It is also known as the day of the full moon of May, where the word Wesak comes from a language spoken a long time ago in India which meant ‘May’.

“Bathing the Buddha statue signifies the cleansing of all impurities and it hopes to give the devotee a better year ahead,” he said.

Tan explained that the Buddha bathing was always something which devotees looked forward to every year. 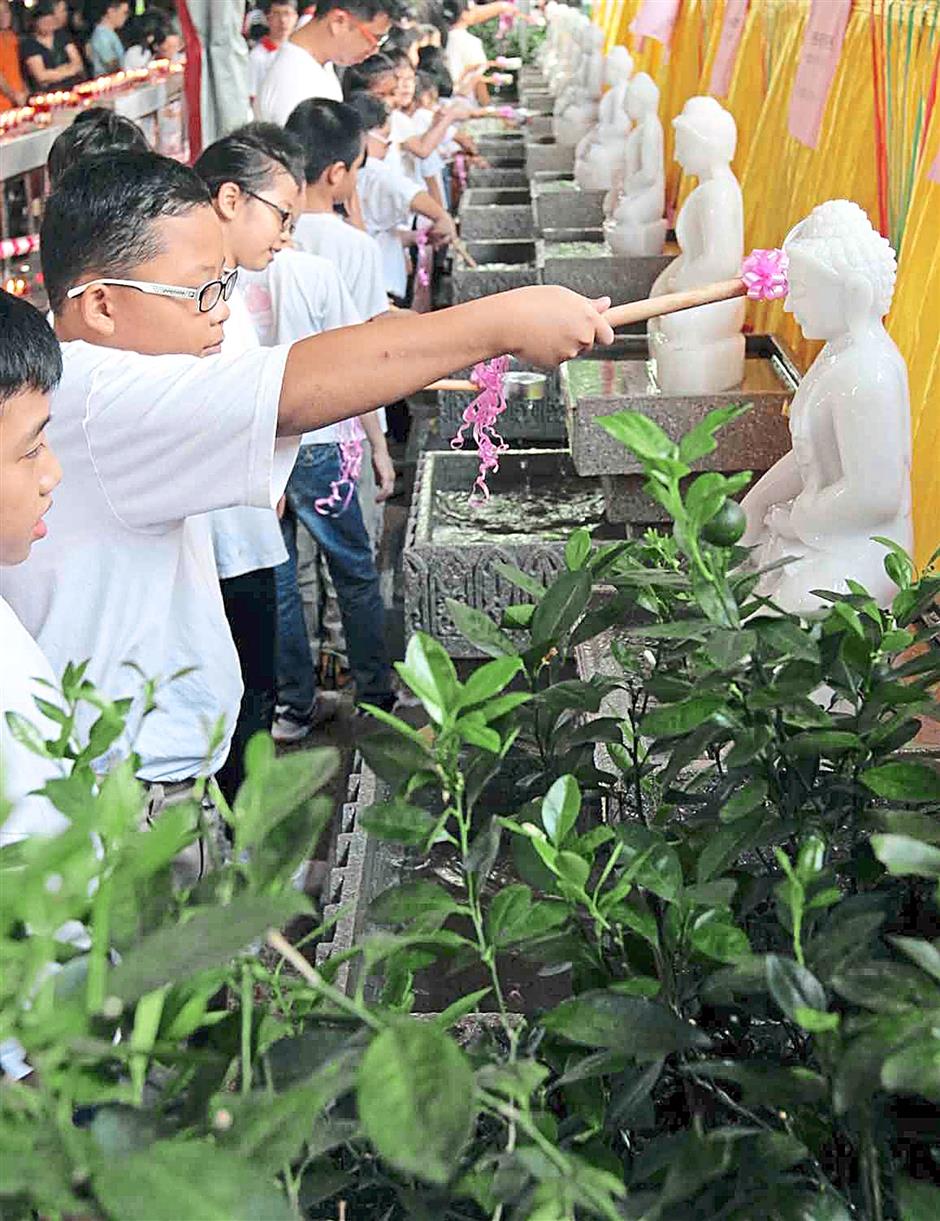 
Another highlight for the day was the lighting of 3,000 oil lamps.

The 3,000 lighted lamps are meant to represent 3,000 Buddha statues which are placed in the Buddha Homage Shrine.

“It sort of symbolises how we should not worry about our past and future but instead live in the present and make the right decisions,” he said.

This new shrine at the temple costs about RM100,000, inclusive of renovations and the Buddha statues.

So far there are only about 1,500 Buddha statues inside the shrine.

The temple hopes to bring the total to 3,000 statues through donations received.

Celebrated over three days, the Wesak Day celebration will end today with a 7km float procession, an annual event since 1954.

This procession, the only one in Petaling Jaya, will see more than 11 Buddhist organisations in the Klang Valley participating.

About 17 floats are expected this year, travelling from Chempaka Buddhist Lodge towards LRT Taman Bahagia to SS2 and then the Ming Tian Food Court before heading back to the temple.

“We have participated in this ever since we started 29 years ago and this year we will be contributing two floats,” Tan said.

The floats are themed ‘Living Home’ and ‘Passing Away’, individually,

“One float with the Buddha statue will signify him leaving his home in search of enlightenment while the passing away one will be the Stupa (Buddha’s resting place),” he said.

They are expecting more than 5,000 participants to walk along during the float procession that will begin at 7pm.

Meanwhile, at the Subang Jaya Buddhist Association (SJBA), an average turnover of 8,000 to 10,000 people were present for its first Green Wesak Day celebrations.

In support of eco-friendly initiatives, the annual commemoration involved elements of environmentalism and creating awareness within the community.

“One such green effort included the use of tea-light candles floating in a water-filled glass jar in exchange for oil-based lamps, which have detrimental effects on the environment,” said SJBA president Chim Siew Choon.

He added that they used to wash off the oil, wasting water and allowing oil to fill the drains.

Offertory flowers were also recycled by the association, and re-used for donations from other visitors.

“MPSJ has also chipped in to provide SJBA with recycling bins as we hope they can lead the community in these recycling efforts,” said Yeoh.

Representing a time of compassion, the association also organised a blood donation campaign that usually collected an average of 400 pints a day from generous blood donors.