THERE was double joy for youngster Loh Chooi Fern at the MKH Putrajaya International 12-Hour Walk in Putrajaya.

Chooi Fern not only won the women’s Open category, but also the gold medal in the 50km.

The 21-year-old Chooi Fern, an accounting student at Universiti Tunku Abdul Rahman, completed 88 laps, equivalent to 88km in 12 hours. She was impressive from the start and took 6’07:37 to hit the 50km mark.

She certainly had reason to celebrate as it was her second attempt in the competition. Her first was last year when she finished second to Norliana Mohd Rusni, who did not participate this year, in the 12-hour event as well as the 50km.

“I completed 86 laps last year and this year there is an improvement with 88 laps. I am indeed very happy as I trained for almost two months for this event,’’ said Chooi Fern. 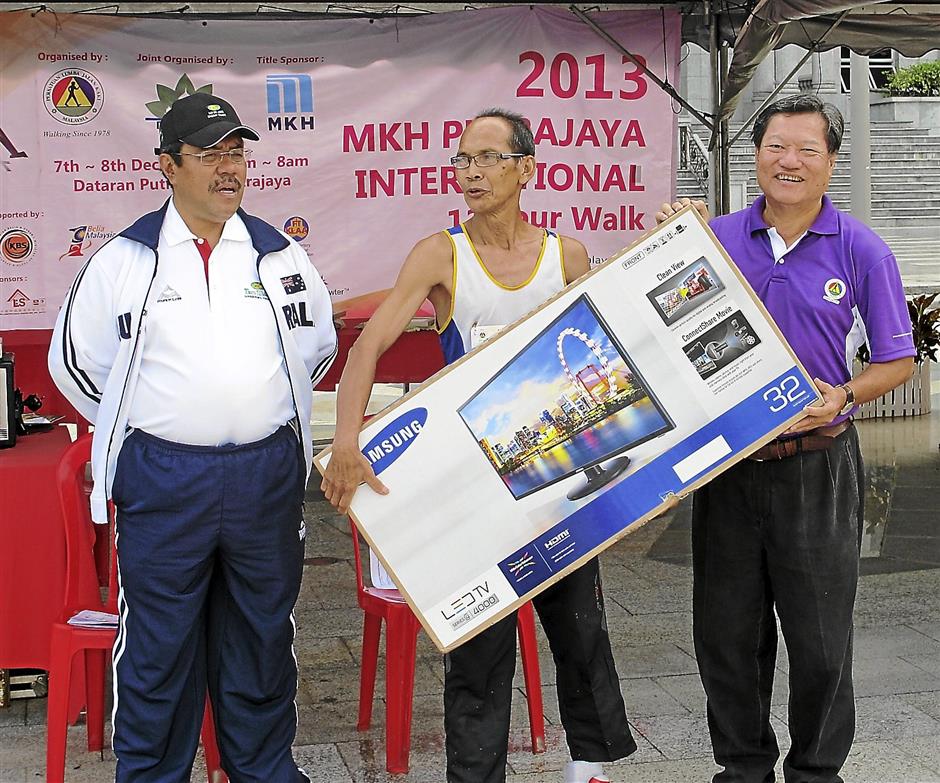 The petite Chooi Fern was involved in a keen battle with Armed Forces’ Norazilah Osman from the start. Both kept close to each other with one lap separating them even in the closing stages.

But with an hour to go, Chooi Fern increased the pace and finished three laps ahead of Norazilah. France’s Claudine Anxionnat was third with 84 laps.

Malaysia’s Mohd Khair Ahmad and Mohd Rahman Abu Bakar made it a 1-2 in the men’s category. Mohd Khair completed 98 laps while Mohd Rahman settled for the second spot with 96 laps. Singapore’s Peter James Back was third after completing 94 laps.

However, Mohd Khair was second in the 50km walk.

“We took the top two spots in the men’s category and the second spot in the women’s category. The other Armed Forces’ representatives also did well. It was well organised and we are happy to be part of the event,’’ said Mohd Hanizam.

About 1,000 walkers from 12 countries — Hong Kong, Japan, Singapore, Saudi Arabia, Czech Republic, Canada, the United States, France, the Philippines, Australia, South Korea and India, took part in the championship organised by the RWAM with support from Putrajaya Corporation and sponsors MKH, Samsung Malaysia, 100Plus and Milo.

About 100 primary schoolchildren took part in the Milo-1Malaysia 1km Walk. Teh Ah Rong won the boys’ category while Aina Natasya Shah was the winner in the girls.

Seasoned walker Abdul Wahid Kassim was the winner of the main-prize in the lucky draw. He won a Samsung 32 inch LED.

“I am happy to be the winner. It is an additional incentive as I managed the 15th spot and completed 78 laps,’’ said an excited Abdul Wahid.

Eddy said they were grateful to Putrajaya Corporation for making the event a success.

“Their support was excellent and we are looking forward to working with them on other walking events as well. We also would like to thank our sponsors for the support. We had received positive feedback from the participants and it is encouraging and motivating,’’ he said.

RWAM deputy president Khoo Chong Beng said they would be working closely with the Putrajaya Corporation to organise the 12-Hour Walk in Putrajaya next year.