THE National Heritage Department has no plans to nominate the iconic Batu Caves to be listed as a World Heritage Site as it does not meet the criteria.

The status is awarded by the United Nations Educational, Scientific and Cultural Organisation (Unesco).

A spokesman from the department said Batu Caves had lost its appeal, and as such, does not qualify as a Unesco Heritage site.

“Not all sites qualify as Unesco has specific criteria and guidelines.

Batu Caves does not fulfil even one criterion out of the 10 listed,’’ she said.

On whether the illegal structures inside the premises were the reason, she admitted that some of the structures were indeed not in harmony with the surroundings.

In response to whether the Batu Caves Temple committee had submitted plans for its cable car project to the department, the spokesman said: “No, it did not. But this is irrelevant as Batu Caves was never on our list for the Unesco bid to begin with, so we are not concerned about the project.

She explained that after Prime Minister Datuk Seri Najib Tun Razak expressed hopes last year of getting Batu Caves on Unesco’s list, some of his officers had followed up with the department.

“We informed them Batu Caves do not qualify and that we are not going to nominate it as it will be rejected anyway,’’ she added.

Last year, at the Deepavali Open House held at the Batu Caves temple grounds, Najib announced an intention to get Unesco to officially recognise Batu Caves as a site worth preserving as it was a Malaysian icon of nature and culture.

As of this year, there are about 981 sites listed as world heritage: 759 cultural, 193 natural, and 29 mixed properties.

Italy is home to the greatest number of World Heritage Sites with 49 sites, followed by China 45 and Spain 44.

In Malaysia, only five have been recognised by Unesco so far — Gunung Mulu National Park, Kinabalu Park, archeological heritage of the Lenggong Valley and the two historical cities in the Straits of Malacca, Malacca and George Town.

Malaysia is a member of the 21-nation World Heritage Committee that decides on the inscription, referral or deferral of properties proposed for nomination, a position it was elected to, for a four-year term (2011-2015). 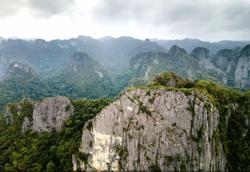