Traditional street food is increasingly being sold in malls

Cousins in business: Carol (left) and Joan Lee started off with three hawker stalls and are now proud business owners of the Oyster King brand, which serves fried oyster (oh-chien).

STREET food is synonymous with Malaysian culture, and local entrepreneurs like the Lim sisters and their popiah offering are tapping into a massive market by bringing well-loved street food into a comfortable setting in shopping malls.

Sisters Crispy Popiah is a pioneer in bringing simple but tasty street food to shopping malls and their signature pandan skin popiah, based on a recipe handed down by their mother and grandmother, has become a household name.

Putting the recipe to good use, Stephanie Lim started selling popiah from a pushcart with the help of her husband at Imbi Market, Kuala Lumpur in 2001. 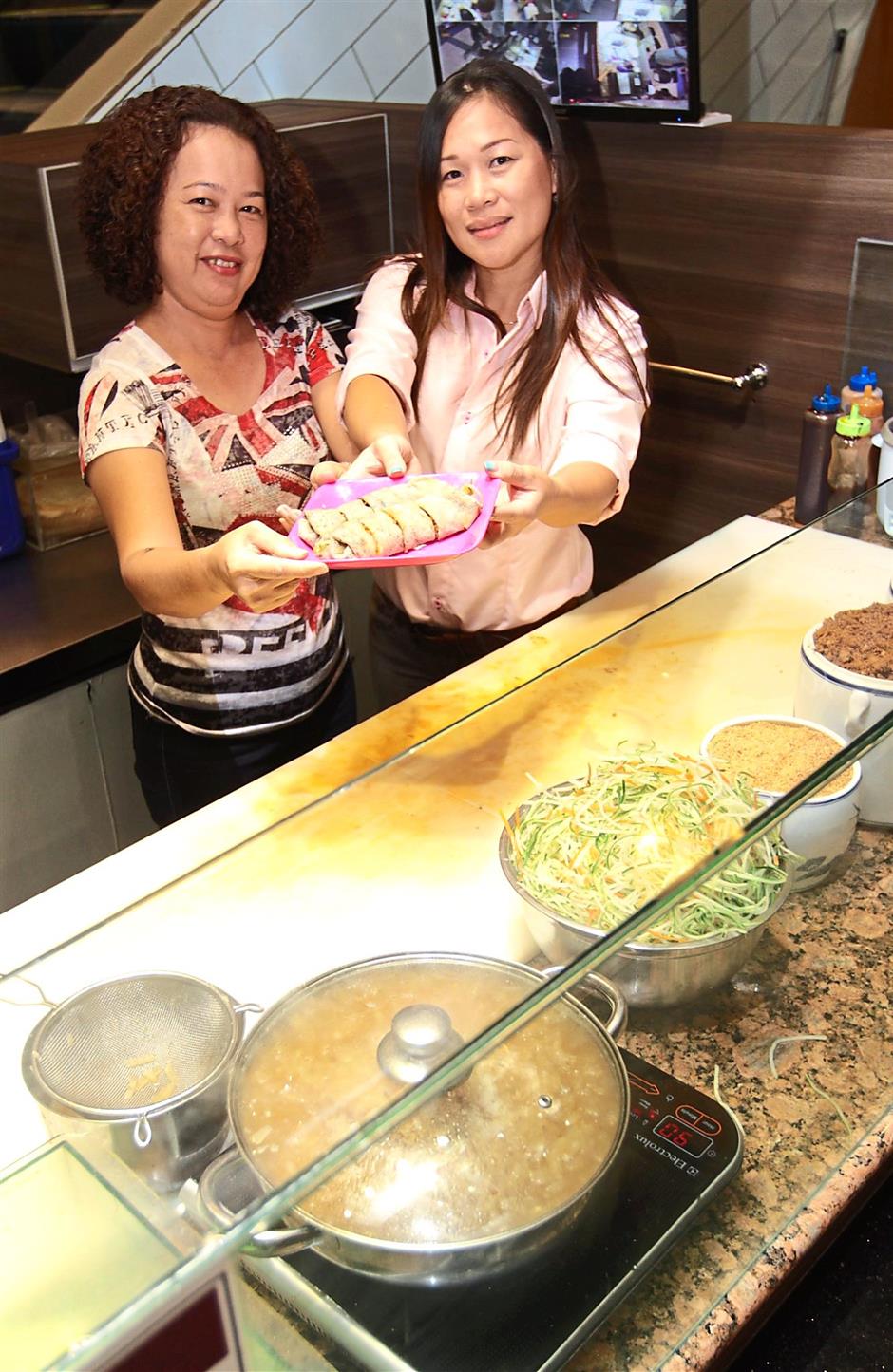 
The stall did so well that her older sister Theresa encouraged them to break into the shopping mall market.

With three other siblings and RM20,000 in capital, they opened their first kiosk at the Mid Valley Megamall in 2003.

“It was difficult getting into Mid Valley, as they already had many established food outlets. At that time, most of them sold imported products. There were not many local brands,” says Theresa.

The stall enjoyed unexpected success, spreading through word of mouth and managing to break even within just a few months.

“When we started this, we just wanted to share our love of popiah and to introduce traditional food with a twist to the next generation of Malaysians,” says Theresa.

She says that in the early days, customers were apprehensive about the pricing.

“They couldn’t believe we could sell a roll of popiah for RM2.50, as the price outside was just RM1.20 per roll,” Theresa recalls.

“However, we do not compromise on quality and the ingredients used. Eventually, more customers started to buy our popiah,” she says.

Within three years, they were able to set up a central kitchen in Cheras.

“The ingredients are prepared at the factory before being sent out daily to the kiosks,” says Theresa.

Sisters Crispy Popiah currently has 20 outlets in Malaysia, six of which are owned by the family.

They are also franchising in Indonesia, and are looking to expand to Australian and European markets.

Theresa thinks the market has become more competitive today as there are more choices.

“Although our core product is popiah, we try to innovate based on customers demands – which is why we have cheese, chicken ham and other fillings,” reveals Theresa.

She adds that they keep costs in check by opting for a kiosk and pushcart-style operation, for which rental can range anywhere from RM6,000 to RM15,000 depending on location.

Theresa believes teamwork is a factor to the success of a business.

“As a family-run business, our strong point is that each of our partners specialise in an area and are able to manage their divisions well. This is why we can continue to sustain it even after many years,” she adds.

Bringing tasty night-market fare into a comfortable environment was the idea behind Oyster King.

“We started in 2008 with three hawker stalls at coffeeshops in SS17, SS2 and Kuchai Lama,” says Carol, a chemical engineer by training.

While business was brisk, Carol says that “moving to shopping malls was a natural progression.”

The pair opened their first outlet in 2009 in Mid Valley. They currently have six outlets in the Klang Valley, two of which are franchises.

Transitioning from hawker stall to shopping mall came with its share of challenges.

“We needed a proper management system, because it was no longer on a small scale,” points out Carol, adding that they pulled together RM100,000 to start the business. This was a big amount compared to their coffeeshop venture which only needed RM2,000.

In the beginning, the cousins had to cook and serve customers themselves.

“We were lucky as Mid Valley has high traffic and we broke even within a year,” says Carol.

One of the biggest challenges in opening more outlets was coming up with a standard recipe, Joan says.

To maintain consistency, a pre-mixed sauce is used, and the weight of the raw materials have to be measured.

The Lees also place emphasis on training and communicating with the staff.

“Ingredients can be controlled, but our workers have to be passionate about cooking to minimise variation in the final product,” she says.

The oysters are delivered fresh daily by local suppliers and from Thailand, and can only be kept for three days in cold water.

She says that the raw ingredients constitute their highest operating cost.

“To try to keep our costs low. We even out the portions and control the number of oysters in each dish, but still try to maintain customer satisfaction,” she says.

“These days there are many food outlets selling ‘trendy’ products. I think we remain relevant because 40 years back, people ate oh-chien, and they still enjoy it today,” says Carol.

After five years in the business, the cousins think it is time to rebrand and diversify.. Come April, Oyster King will be rebranded as 9 Market. This will be done in stages at all their outlets.

The new concept will feature local night market snacks, while retaining oh-chien as the key product.

“Malaysia has a vibrant street food culture, so we are excited to bring this to shopping malls,” says Carol.

Their advice for young entrepreneurs is to have a clear vision for their products.

“I think more youths today intend to start their own business, but some only think of making a profit.

If you’re lucky, you might regain your investment in a few months but you may also lose money,” cautions Carol, adding that perseverance and passion are key.

Fried Chinese crullers (yoo tiao) are traditionally sold at markets as inexpensive snacks, so the fact that I Love Yoo! managed to expand their brand with the humble cruller as a core product is a testament to its popularity among Malaysians.

I Love Yoo! currently has 36 outlets all over Malaysia, plus a store in Brunei and one more opening in Cambodia.

Unlike Sisters and Oyster King, I Love Yoo! started off in a shopping mall, with their flagship store opening in 2007 at Food Republic, Pavilion KL.

“The management was looking for vendors to sell fried snacks, so we went in, and the rest is history,” says co-founder and managing director Jeffrey Leong.

“We were lucky as business was good. We broke even on our initial investment of RM150,000 within six months,” says Leong. 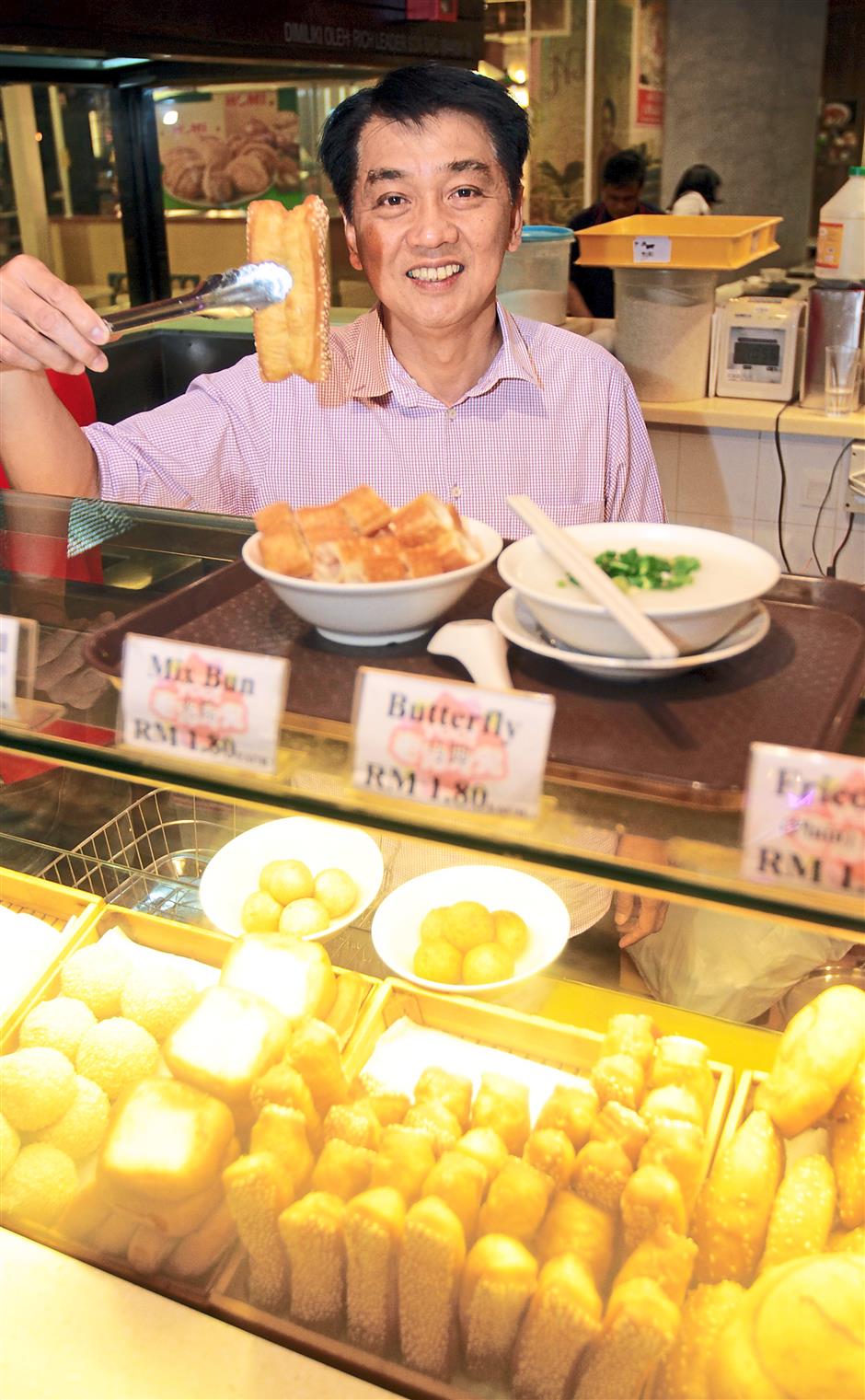 Popular snack: I Love Yoo! co-founder and managing director Jeffrey Leong jumped at the chance of bringing fried street snacks into a comfortable environment with their first outlet in Pavilion KL.


Leong was in the film industry for 18 years before he ventured into F&B. He has previous experience running a food court in Kuala Lumpur.

Knowing next to nothing about preparing yoo tiao, Leong and his partner Lim Gnian Liang did on-ground market research, visiting traders in famous street-food spots.

“None of the traders wanted to teach us how to prepare yoo tiao. We finally hired a local sifu with experience working in Hong Kong,” he remembers.

“Initially customers complained that it was expensive. We started off selling them at RM1.50 each, which is 50% higher than outside,” he says.

As the brand grew, Leong says that they were fortunate to receive offers from shopping malls to bring the brand in.

The pastry dough is prepared in a central kitchen and sent to stores all over peninsula Malaysia, while for outlets in Sabah and Sarawak and overseas, they send standardised ingredients in containers every week.

“One of our unique selling points is our affordable price. I believe we are one of the places selling the cheapest food in shopping malls,” says Leong.

“You’ll be surprised to know that at the end of the month, there is usually increased traffic, as people wait for their salaries to be banked in,” he laughs.

Leong says they are looking to expand the brand in the next five years and are looking at opening 90 more outlets.

“Since we are established in malls, we are looking at highway rest stops, hospitals, universities and MRT stations,” says Leong.

According to him, they are constantly sourcing for new and better supplies that are reasonably priced but of good quality.

“Our business model depends on volume rather than price,” he says.

They are also constantly looking at ways to innovate their offerings.

“Some of our Malay customers enjoy yoo tiao with sambal and kaya. If all goes well, we will add that to the menu soon,” says Leong.

On starting a business today in a highly competitive market, Leong says new businesses must keep quality in mind.

“You want customers who are loyal to your brand, who keep coming back for more,” he stresses.