Foreign workers to be rehomed

1 What used to be a house is now a shop run by foreign workers living in nearby hostels.

WHILE most of those living beside foreign worker hostels may feel unsafe or are plagued by various issues, residents in SS9A Sungai Way are actually sad at the prospect of the workers moving out of the area.

To these residents, the migrant workers are already part of the community; and they support local traders and keep their businesses such as eateries and grocery shops going.

However, these migrant workers will soon be calling a new development in SS8 home.

Known as the Petaling Jaya Elevated City, the new development is located in the Sungai Way Free Trade Zone where the migrant workers are employed.

“Moving there will be easier for them as it will be closer for them to get to work.

“But it will be a loss for our community as we have all learnt to live together over the years,” said the Community Security and Development Committee (JKKK) chairman Ding Eow Chai.

He explained that the workers occupied more than 100 houses in the neighbourhood and each unit could accommodate more than 60 occupants, sometimes even up to 100.

Unlike other overcrowded hostels in Klang Valley, the ones in Sungai Way are much bigger than normal terrace houses, with land sizes of more than 5,000 sq ft.

Most owners have renovated their houses to make the property three storeys high while others build a few different units on the plot of land to accommodate more tenants.

Driving around the narrow Sungai Way roads, visitors will be able to see some houses labelled with alphabets, to represent the different units on a piece of land

Also, there are multiple water meters seen in the compounds along with multiple electricity meters lining the walls outside the houses. One of the properly regulated foreign worker hostel, which looks clean and presentable. Although there are many tenants living under one roof, this home is well cared for.

“We do not have a problem with them living here as they are well behaved and they do not cause any social problems,” said Ding.

According to him, the workers are employed by a manufacturing company operating in the Sungai Way Free Trade Zone and they their lodging is well regulated.

Each house has a leader who monitors the situation and ensures everything is in order.

They are also active in helping out with community activities such as gotong-royong and, according to Ding, they try contributing in any way they can.

“These regulated houses are well-kept, the rubbish is disposed properly and since they do not have cars, parking is not a problem,” he said. 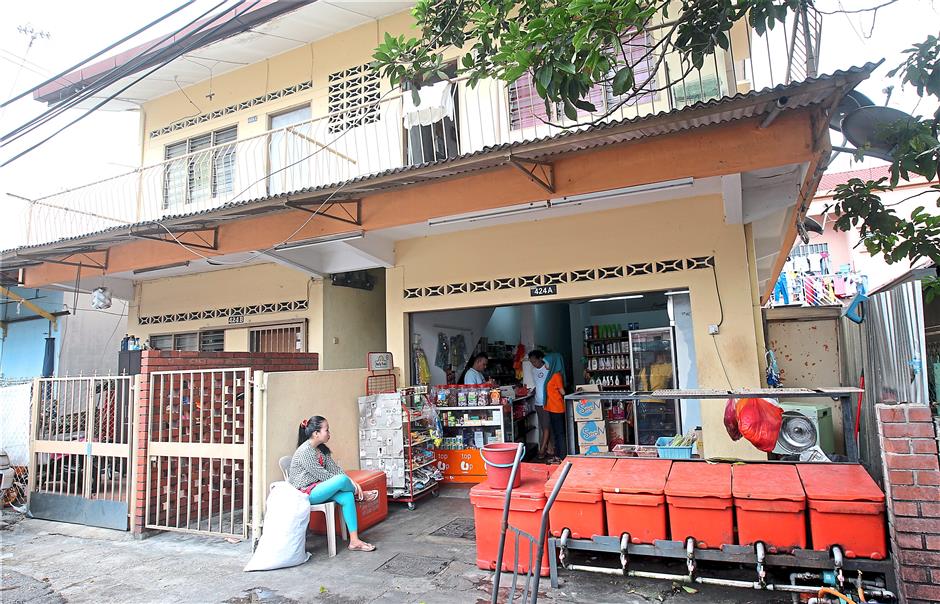 An example of a house converted into a hostel, with tenants living upstairs while also doing business downstairs. This is also an example of an unregulated foreign worker hostel.

However, there are also unregulated worker hostels or the ‘loose bunch’ as the villagers term it.

Tenants here are harder to monitor as their employers are unknown and many do not stay long, sometimes just weeks or months.

“We do not know exactly how many there are and sometimes they do cause problems, especially littering,” Ding said.

In addition, some of them actually start businesses on the ground floor of their hostels.

They sell either food or clothes and even run sundry shops selling groceries to other migrant workers living there.

“These are unlicensed and the amount of rubbish they produce, especially from the restaurants or food stalls, is too much,” said Ding.

He said there had been an incident involving the unregulated hostels where a fire broke out in one and about 60 workers living there lost everything to the blaze.

The story of how SS9A in Sungai Way became a migrant worker hub started some 30 years ago when the Free Trade Zone was booming with big manufacturing companies.

The free trade zone in SS8 comprised mostly factories and there was not enough space for workers’ hostels.

So an agreement that allowed houses in SS9A to be converted into hostels was struck between the local authority, the government and the factories.

“Some owners have actually shown me letters stating this, and it was an agreement made long ago,” said Kampung Tungku assemblyman Lau Weng San.

This was done with the aim of keeping the manufacturers in Sungai Way and not have them move out of Klang Valley just because there was no space for their workers to live.

However over the years, a few major factories moved out of the free trade zone leaving only one big manufacturing company along with other smaller ones. The many water meters seen on the compound of a hostel, to cater to the many tenants living there.

Lau is not sure if the three-decade-old agreement included proper guidelines to regulate the hostel conversions.

“Most houses here are built with very little set-back and this is not in accordance with the current Petaling Jaya City Council (MBPJ) guidelines.

“The owners built up as much as they could to accommodate more tenants.

“One of the owners even told me he could make RM10,000 per month on rental collection alone,” he said.

Lau explained that hostel owners would suffer some losses once the foreign workers moved out to the new development.

However, there is still some confusion on who exactly is moving out.

“It’s harder to confirm if the loose tenants are moving to the new development because they don’t rent the place for long.

“There is no one we can direct queries to such as their employers, agents or group leaders,” he said.

When contacted, MBPJ public relations officer Zainun Zakariah said the local authority did not want to comment on the matter for now as the new development was not ready yet.

Selangor State Development Corporation (PKNS), on the other hand, said that only the migrant workers employed by one manufacturing company would be moving to the new premises.

“We are not responsible for the transfer of the migrant workers as our job is to build the hostel.

“But, to the best of our knowledge, only one company will be moving its migrant workers into the new development,” said PKNS public relations manager Ishak Hashim.

Currently, piling and substructure works are in progress for the two blocks of 11-storey hostels with 288 units.

This will be built on a piece of MBPJ land in SS8, that had previously been used to store vehicles that had been towed.