No law against crowded homes 1 Residents believe this corner house is being renovated so that it can be converted into a student hostel with at least 10 rooms.

THERE has been much debate about overcrowded homes, especially given the rise in the number of properties being converted into hostels, whether for students or foreign workers.

Those living near such houses would argue that a double-storey terrace house would be unfit for more than eight tenants, at most.

Landlords, on the other hand, would want to maximise returns and many would try to cram in as many tenants as possible, sometimes even more than 10 people to a house.

These “hostels” can be found in many neighbourhoods in the Klang Valley, especially those located near institutes of higher learning, industrial areas and commercial centres.

To put the arguments to rest, StarMetro referred to the Local Government Act 1976 to find out just what the law determines is overcrowding.

Shockingly, the Act, which was written almost four decades ago, states that even having 50 or 60 occupants in a property would not be considered overcrowded.

Section 79 of the Act states that there can only be one adult for every 350 cubic ft of clear internal space and for the purposes of the Act, an adult is defined as any person over the age of 10 years old.

Two children under the age of 10 will count as one adult.

Based on calculations for an average double-storey terrace house, the law allows for about 85 people to live in it.

To get to this figure, we assumed that the average double-storey terrace measured about 1,500 sq ft in floor space. 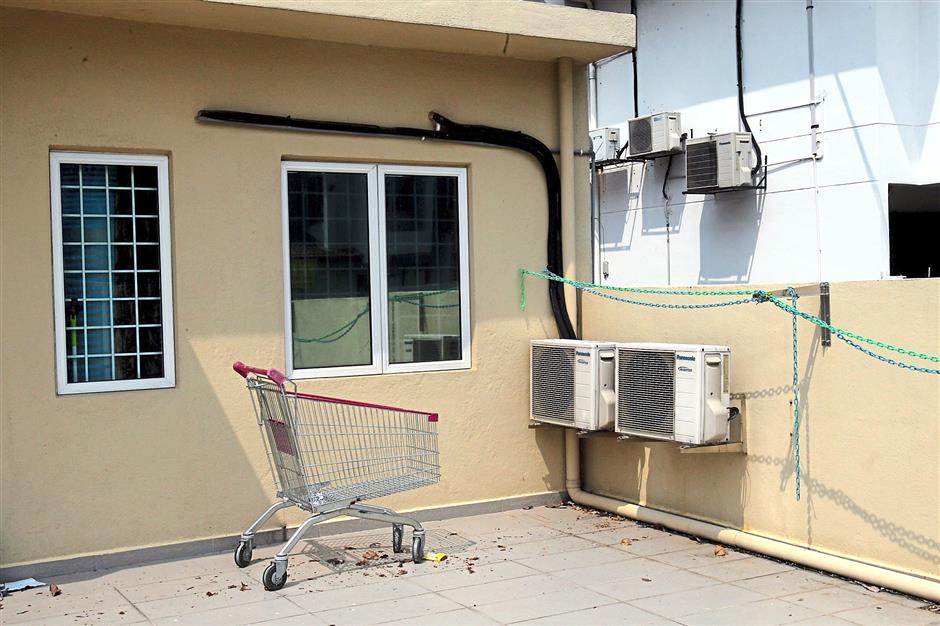 This corner house already has eight air conditioners apart from these two which can be seen at the car porch of the house.

The figure amounted to 30,000 cubic ft, and since one adult only needed 350 cubic ft, it would allow the house to fit about 85 people in it.

“There is clearly a loophole in the law but on the national average, a maximum of five to eight people per family per household is acceptable and reasonable,” said Malaysian Institute of Planners president Md Nazri Mohd Noordin.

Even if some space is deducted for kitchen and toilet space, the calculations still come up to about 60 people per house.

Part of the problem is that the Act does not limit the calculations to bedrooms but includes any space within the premises that is clear and free.

“Even if the law says that, is it the right use of the building in terms of safety?

“I believe local governments have the tools to control this if they want to without even having to refer to the Act,” Md Nazri said.

For example, local authorities have different guidelines for the various zoning of houses, including hostels, which has its own guidelines.

He added that getting the Act amended was not an easy thing and the process would be too long and tiring.

Instead, he proposed a few solutions to this. Cars parked haphazardly on the road, making it hard for residents to manoeuvre through the narrow road in the PJS 9 neighbourhood. Residents claim these cars belong to friends of tenants living in the student hostel, who park there and walk to their university.

One solution was for guidelines to be written to strengthen the existing Act.

“Since some councils might not have the budget or manpower to write up the guidelines, the ministry can actually come up with the guidelines and give it to local authorities to implement,” he said.

“That way, not only will the guidelines be uniform, it can also help solve the issue of overcrowding,” Md Nazri said.

Another possible solution he suggested was for the local councils to impose stricter enforcement and have a team focused solely on tackling student and foreign worker hostel issues.

This would include frequent checks at houses which have been converted into hostels to ensure the number of occupants do not exceed the council’s set figure, based on the size of the house.

“However, I think this would take too much effort and manpower, which most local authorities cannot spare.

“Instead, the councils should work with universities,” he said, referring to students’ hostels.

He explained that this can help local councils better regulate the hostels. One of the signs the house is a student hostel – the many clothes and shoes outside the house. Also the extra air-conditioning units seen on the left wall of the car porch

For example, Md Nazri said, those who want to turn houses into hostels would first need to apply for a licence from the local authority before registering with the university.

Approved hostels would be listed by the university and students who need accommodation would have to apply for the hostels through the university.

This way, not only will it be safer but the number of students per household can be controlled and monitored as well, he said.

“Depending on the size of the house, the respective local councils can determine a figure for maximum occupants and the landlords will have to adhere to it.

“Since the universities will be in charge of it as well, this will help ensure the number of occupants do not exceed the allowed figure,” he said.

He added that this system was already implemented in foreign countries such as the US and it made it easier for the students as well.

“With control of how many people can reside in one house, this can ensure the safety aspects are looked into as well and also allow for some personal space for each person,” he said.

Similarly, this regulating process can also be applied to factories, where foreign worker hostels will also have to be registered.

Currently, some bigger developers are already looking into allocating space for foreign worker hostels in areas where they are building factories or commercial projects.

“I have worked with a few developers who actually took this into consideration and I think this is great.

“However, we cannot avoid having students and workers omitted from living in residential neighbourhoods because everyone has to co-exist,” he said.

He explained that kicking the tenants out or banning houses from being turned into hostels was not the solution.

Instead, stricter enforcement and regulation was the answer.