Downpour fails to put a damper on walk

1 (From left) Kamal, Dr Mah and Yeoh waving at the walkers. Top right is Lee.

NEVERMIND that they were getting drenched, the 15,000 participants of Ipoh Starwalk 2015 that congregated at Stadium Indera Mulia were determined to complete the 7km walk despite a downpour.

While some had gotten ready their raincoats and umbrellas, others braved it out by walking in the rain.

Among them was homemaker Tang Lai Jiuan, 48, who took part in the walk with her two teenage children while pushing her two-year-old niece, Mah Zhi Qian in a pram.

“When I woke up and realised that it was raining heavily, I had half a mind to just stay home instead. 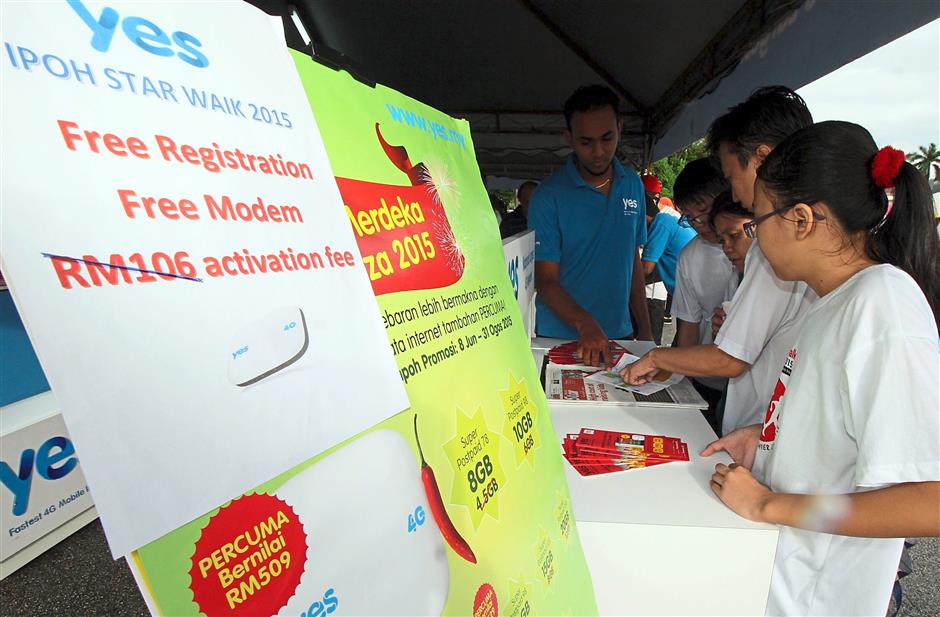 “But Zhi Qian was even more excited for the walk than me. She was already jumping around happily and asking to get dressed for the walk,” she said.

Tang, who is a third time participant, said it was an unforgettable experience to walk under the rain while holding an umbrella to shield Zhi Qian.

“But I had to take her back to the starting point after walking halfway, because I was worried she might catch a cold and fall sick,” she said.

Another family who walked in the rain from the stadium to Jalan Raja Ashman Shah (Jalan Hospital) and back was debutant M. Rajeswary, 43, and her eight other family members.

The teacher was also joined by her husband M. Ainamutherian, 49, and their three children. “The rain was not a problem to us. All of us felt very happy despite getting drenched.

“I had to hold my six-year-old daughter all the way, while holding my husband’s hand.

“It was somewhat romantic in a way,” she said with a laugh.

Four teenage good friends who braved the rain without any umbrella or raincoat to complete the walk said they did as a team.

His friends Tan Jun An, Ng Kar Ken and Ng Yi Yuan said they were all excited and looked forward to the event.

All are from SMK Poi Lam while Yi Yuan is from SMK Sam Tet. 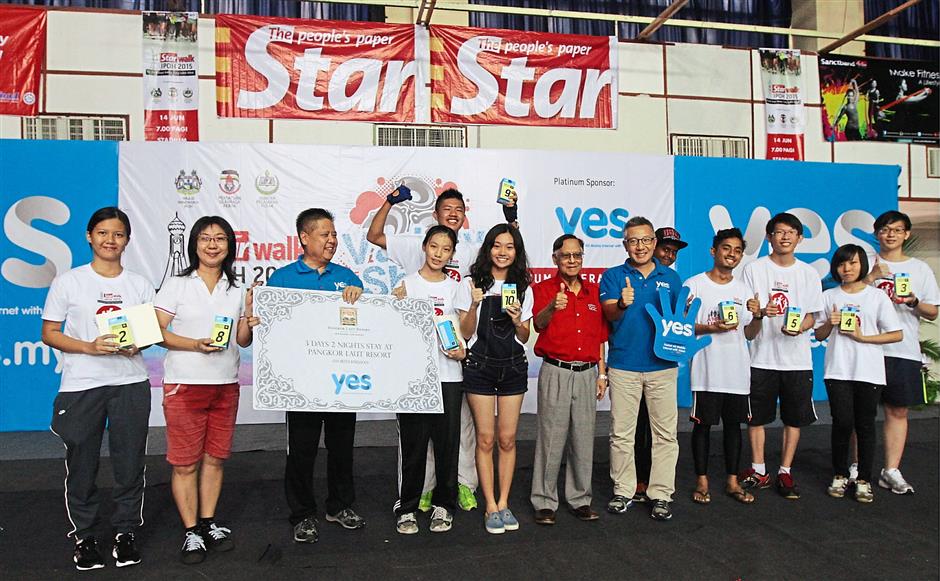 Young and old, friends and family, further proved what good sport they were by staying on for the variety show, still wearing their soaked attire.

The hip-hop dancer stole the hearts of the audience with her energetic moves to the tune of “Mambo No 5”.

“I like dancing, I do ballet, gymnastics and Latin dances, and recently I told my mother I wanted to learn hip-hop.

“So, I enrolled in the D’Artiz Studio in December, and I am enjoying the dance moves so much,” she said.

Besides Tia, the dancers from the studio grooved to the energetic hip-hop breakdancing, captivating the crowd with their fabulous moves.

The emcee for the day K.T. Pillai of PR Project Events Management, before introducing the professional streetdance studio dancers, sang nursery rhymes and Malay songs in the hip-hop tune.

Pillai also created moments of laughter by coming up with quizzes, and those who answered correctly were handed gifts.

Besides the dance studio, Sanctband, the manufacturer of high quality latex-resistive exercise band and tubing for strength training, also thrilled the crowd with its “Fun is Fitness” incorporating Zumba on the moves with the bands. 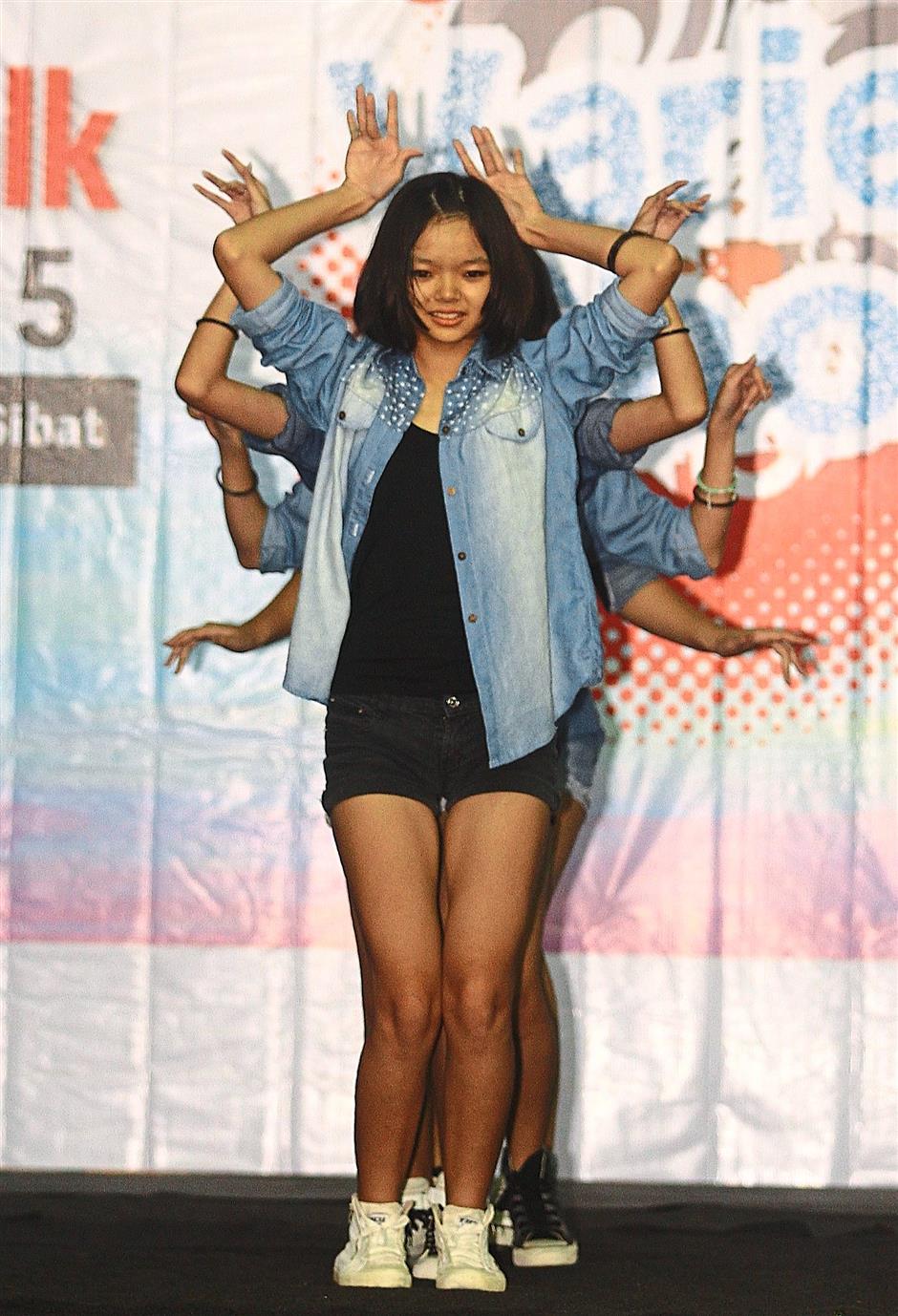 The fitness dancers showed how the bands could help you get in shape.

Singer Wong Mun brought the house down with the ever popular I hate Myself For Loving You and a Chinese song titled ‘Mr Q’.

The 24-year-old Wong is no stranger in the entertainment scene having emerged triumphant in various singing competitions.

She got the audience rocking on their feet with her renditions.

Then it was time for the much-awaited lucky dip, which featured two grand prizes worth RM6,000 each sponsored by YES.

Students Chung Wem Ying, 18, and Poah Yi Wern, 16, each won a 3D/2N stay at the exclusive Pangkor Laut Resort by YTL Communications Sdn Bhd, and a Samsung Galaxy A3 smartphone.

The schools with the highest entries were SMK Ave Maria with 685 participants, SMK Poi Lam with 612 participants and SMK Sam Tet with 565 participants.

At the sponsor booths, hordes of walkers made their way to check out what the booths had to offer.

While many went to pick up free drinks to quench their thirst, others were queuing up to play mini games, sampling goodies, checking out fitness equipments and sweet Internet deals.

They were also allowed to sign-up for the ePaper standalone, and to subscribe for the newly launched The Star-Sin Chew ePaper package.