Care and support can help make childbirth a joyful experience

Bonding: Holding a baby close to the mother’s chest can be a wonderful moment.

ASK a woman to describe the single most painful experience of her life and most mothers won’t hesitate to say childbirth.

Pain is only one factor of many influencing women’s experience with the process of childbirth.

Other than personal expectation of labour, a Cochrane review of 137 studies found that the amount of support from caregivers (midwife and doctor), quality of the caregiver-patient relationship, and involvement in decision-making are more important in women’s overall satisfaction with the experience of childbirth than are other factors such as age, socioeconomic status, ethnicity, preparation, physical environment, pain, immobility, or medical interventions.

The study is simply saying that the level of care and support provided by the caregivers during labour, the trust and relationship between patient and her doctor, taking into account the women’s wishes and getting them to take control in decision-making of her childbirth process would modify the pain and fear of childbirth into a pleasant and much less painful and much enjoyable experience. 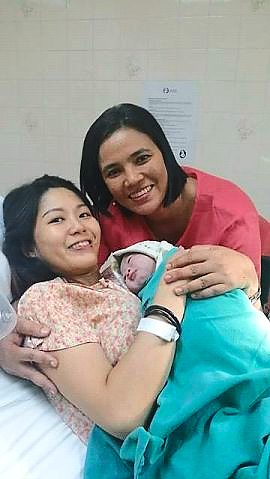 Supportive care during labour may involve emotional support, comfort measures, and information and advocacy which may promote the physical process of labour as well as women’s feelings of control and competence, thus reducing the need for obstetric intervention.

Other than the midwives and doctor, the woman can also get support from a companion of her choice, either her husband, female relative or close friend to accompany her throughout the labour.

There is increasing evidence to show that the participation of the child’s father in the birth leads to better birth and also post-birth outcomes, providing the father does not exhibit excessive anxiety.

A recent Cochrane review involving more than 15,000 women in a wide range of settings and circumstances found that women who received continuous labour support were more likely to give birth ‘spontaneously’, i.e. give birth with neither caesarean nor vacuum nor forceps.

In addition, women were less likely to use pain medications, were more likely to be satisfied, and had slightly shorter labours.

Other than support from caregivers and companion, calm and relaxing ambient of the labour room might be of help to alleviate the pain of labour.

A warm, quiet, dark environment, or perhaps with soft music, not a brightly lit room with lots of people around promote the release of hormone oxytocin that regulate uterine contractions.

Oxytocin is a hormone that is known to evoke feelings of contentment, reductions in anxiety, and feelings of calmness and security. It is believed that it plays a major role in the bonding of a mother to her infant and in the establishment of maternal behaviour. According to the study, the act of nursing a child also causes a release of oxytocin.

In some hospital practice, a labouring woman is routinely put into lithotomy position where her legs are tied up to the poles at second stage of labour when she begins to bear down. This position may be helpful for the caregivers but it often makes the labouring mother feel uncomfortable and helpless.

It is important to allow the woman to take control of her position during labour so that she would be free to decide on which position is best for her and she could adjust her position according to her comfort.

However, the best and rewarding moment of childbirth that brings about lasting sweet memory is the experience of having the naked-baby placed close to mother’s chest or ‘skin to skin’ contact immediately after the child comes out of the perineum.

Immediate ‘skin to skin’ contact, sometimes called kangaroo care has been shown to be beneficial to both mother and the infant by a recent scientific medical evidence.

The stimulation from mother-infant skin to skin contact will not only result in improved breastfeeding outcomes i.e. increased milk production and successful breastfeeding but also promote bonding between mother and baby that last a lifetime.

A 2007 Cochrane review of studies also found that skin-to-skin contact at birth reduced infant crying as a result of anxiety from immediate separation from the mother, kept the baby warmer, stabilised the heart and respiration and improved mother-baby interaction.

Natural birth is desired by many women, but the fear of pain and long labour process often hampers their hope and will that some women choose caesarean birth.

For expecting mothers, don’t be afraid to take charge of your pregnancy and childbirth. You have the power to transform the painful and fearful experience of childbirth into a pleasant and exciting experience.