The BRT project, the first of its kind in Malaysia, is expected to be completed by May, enabling commuters to use the 5.4km route within Subang and Bandar Sunway.

An eco-friendly transportation system, the BRT will use 15 electric buses on dedicated lanes to minimise congestion.

“It is expected to benefit about half-a-million people in Sunway and Subang and will provide seamless connectivity to the Setia Jaya KTM and USJ 7 LRT stations nearby.

“We believe this will provide connectivity for about 30,000 students as well,” he added.

The line has seven stations with one park-and-ride facility at the depot at SunU-Monash Station near Monash University in Bandar Sunway. First of its kind: The BRT will help reduce traffic congestion, improve time management and provide seamless connectivity for commuters.


“We hope this project sets the standards for future BRT initiatives in the country, especially since it has good social impact and will benefit a lot of people,” Ismail said.

The media was given an opportunity to try out the buses and visit the depot, which is part of the RM634mil public-private partnership between Sunway Group and Prasarana.

“We have an excellent working relationship and this project is proof that corporate companies and the public sector can work together for both business and national interests,” said Ismail. 
During the visit, Prasarana group managing director Azmi Abdul Aziz said the project was aiming for gold class certification, the highest recognition for BRT services around the world from the Institute of Transportation and Development Policy. It is an independent organisation working with local councils and governments based in New York.

“There are several benchmarks we have to meet to obtain the gold class certification and our crew have two months to fine-tune it,” Azmi said.

He also briefed the media on the facilities available on the buses and in the depot.

Boasting comfortable seats, the buses are scheduled to operate with a headway of five minutes at 30kmh to 40kmh although they are capable of a maximum speed of 80kmh.

“The buses are charged for at least four to five hours so that it can run for 12 hours a day, which translates into about 250km or 23 trips,” he said. 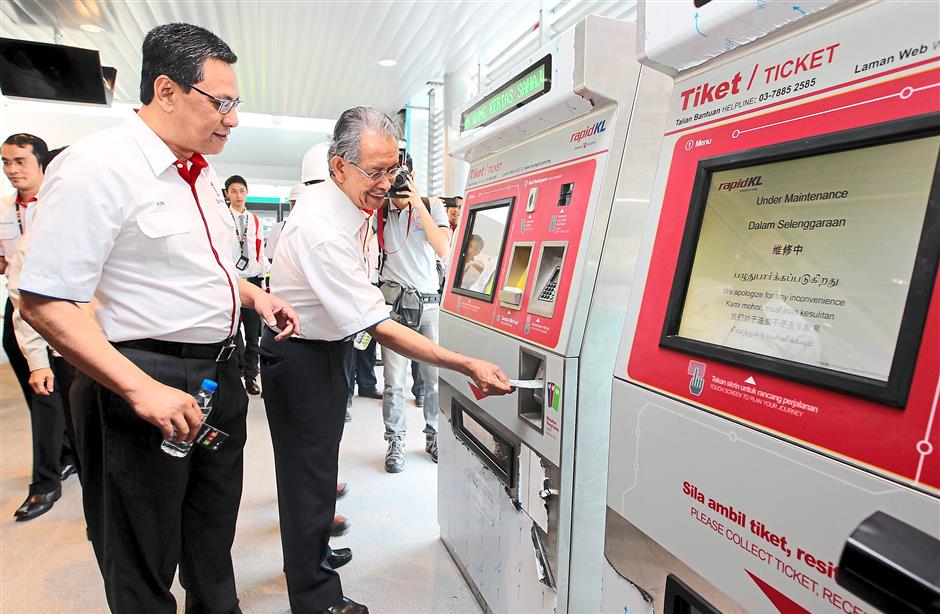 Tour of station: Ismail (left) and Azmi trying out the automated ticketing machine at one of the BRT stations.


A total of 15 charging bays are set up in the depot, which also houses the bus maintenance centre as well as the operations and security control centre.

“For park-and-ride passengers, the depot has 1,153 parkings bays, including 102 bays reserved for women and 23 bays for the disabled,” said Azmi.

Azmi also said the stations had universal access facilities for the disabled, apart from other basic necessities.

The depot is built on an existing 4.6ha oxidisation pond that has been upgraded to a state-of-the-art facility.

“We used 2.6ha for the depot and we hope the pond can operate at double the capacity so it will provide other opportunities for such facilities to operate,” Azmi disclosed.

The bus fare has not been determined by the Land Public Transport Commission (SPAD) but will utilise the Automatic Fare Collection System with four choices of payment modes.

“This decision, however, lies with SPAD and the Government,” he said.