Small-screen favourites: Sangeetha (left) and Haridas with their awards for the telemovie ‘Unarvu’. They are joined by Jasmin Michael.

Denes is an accomplished actor, anchor, compere, dancer and director.

He collected the most number of votes in a poll conducted by MKU, an online portal promoting Malaysian Indians in show business, beating five other artistes for the Most Popular Artiste award. The five others were C. Kumaresan, Jasmin Michael, Kash Villanz, Geetha and Magen. An excited Denes said the win was an encouragement for him to keep giving his best in the local movie industry.

“The awards, especially the Most Popular Artiste, is a meaningful one. Being voted in a poll among seasoned artistes is indeed encouraging.

“The award is a big responsibility. I have to live up to expectations in my next programme. I am really excited,” he said.

Sangeeta was voted Best Actress for her impressive performance in the movie Vennira Iravuggal and telemovie Unarvu.

When receiving the award, Sangeetha said she was not keen on pursuing an acting career in India.

“I am happy working in Malaysia. I prefer to continue acting in local movies. I’d like to thank MKU for initiating this awards. It is a recognition to Malaysian Indian talents,” she said to applause from the audience. From one hero to another: Aghonthiran (left) receiving the Best Actor award in the movie category from Kumaresan.

Voted best telemovie, Unarvu tells the story of a man who becomes a father under unexpected circumstances, forcing him to change his life path. The telemovie thus revolves around the relationship between him and his daughter.

Shashitharan, who started his career as an actor, made his directorial debut with this telemovie.

“We had an excellent script and the artistes gave their best. We were able to come out with an interesting movie. “The credit should go to the producer for having faith in the story and in me. This is a good beginning for me and I am now working on my next project,’’ Shashitharan said.

Veteran artiste K.S. Maniam, who has been involved in the local drama and movie scene for almost 40 years, received the Lifetime Achievement award.

Awards organising chairman SP Saravanan said they were pleased with the response from the local artistes.

“We had exclusively invited only the artistes from the Malaysian Indian entertainment scene. 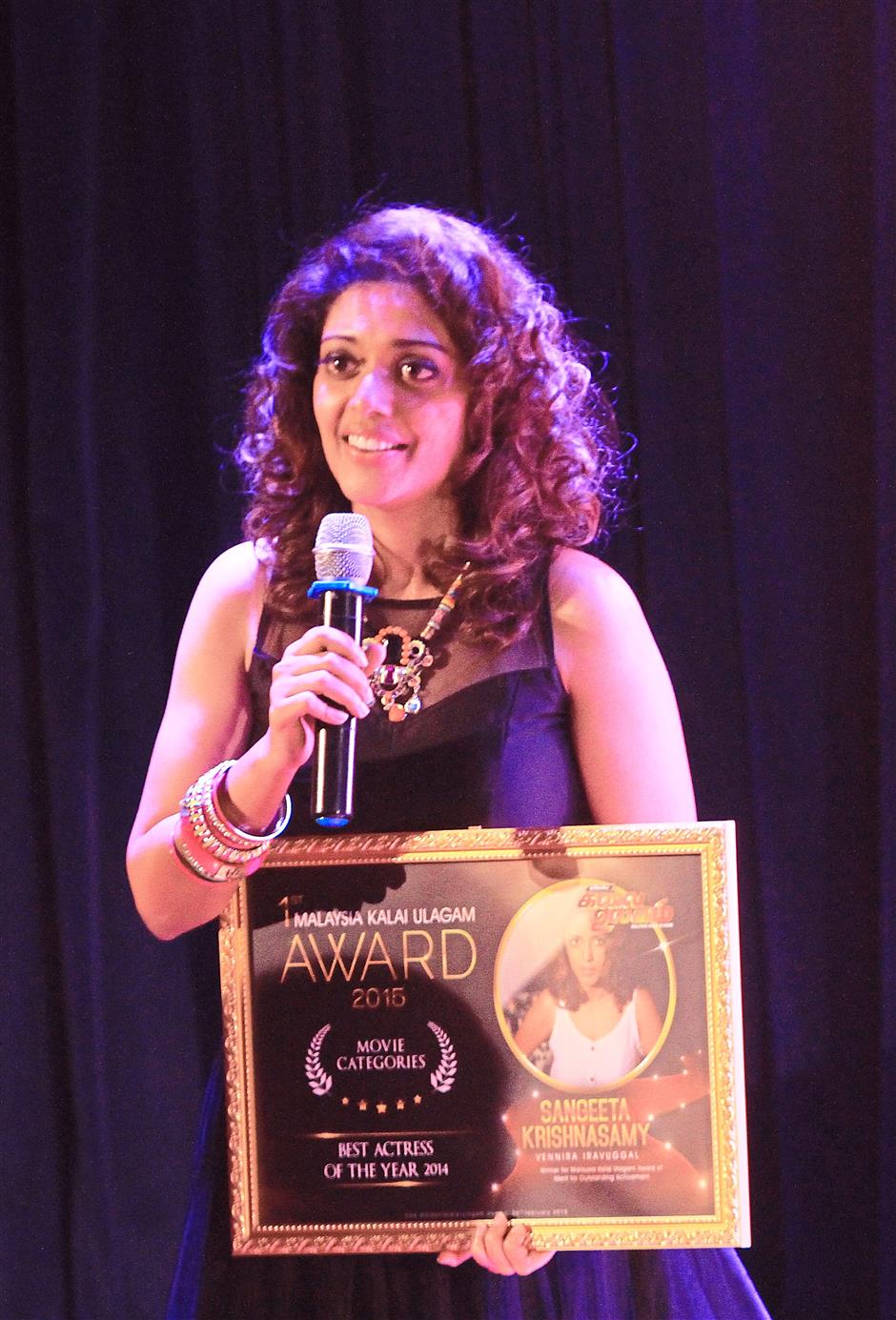 Choosing Malaysia: Sangeetha addressing the audience upon receiving her award.

“They came in full force to support their colleagues. It is a healthy sign and we plan to organise the event annually in February.

“For next year, the winners will be announced in the first week of January,” he said.