This 90-year-old man is a master at chair-caning, and he's blind

Revelle Lee learned caning when he was 11 and he has spent nearly eight decades perfecting a craft mostly lost in a modern world.

Through a cluttered garage and down basement steps, that’s the way to a world where no one sees better than a blind man. The room is warm, the ceiling low. Cane pulled from a jungle floor hangs from the walls. The room stretches long to the back, where worn-out chairs look to be crowding each other aside as if hoping to be next for the short, bald man in a white lab coat. His name is Revelle Lee, and some say he is a master.

The 90-year-old regularly comes down those steps in mornings still dark. Makes no difference. Light shines bright in his fingertips as he pulls cane thinner than thin spaghetti, an arm length at a time, and uses a spoon handle, an ice pick and golf tees to put new seats on chairs for a fine dining room he could never have dreamed of growing up.

This basement of a brick house on a cul-de-sac in Missouri, the United States, is where Lee catches up with a sighted world.

His full name is Stephen Revelle Lee, but he dumped the first part because he liked the punch of the bugle cry.

He grew up dirt poor in southern Missouri hills to parents unprepared to care for a boy going blind. He couldn’t do odd jobs for money – wasn’t even good at scrubbing floors.

But now people from Colorado, Nebraska, Arkansas, Iowa, all over send chairs to his basement shop. Two people work for him. They see just fine and ask him for help.

“I’ll have him come over and check my work and he’ll feel around and say, ‘Looks good to me,’ ” said Bob Shields, 78, a retired police officer. “I don’t know how he does it.” 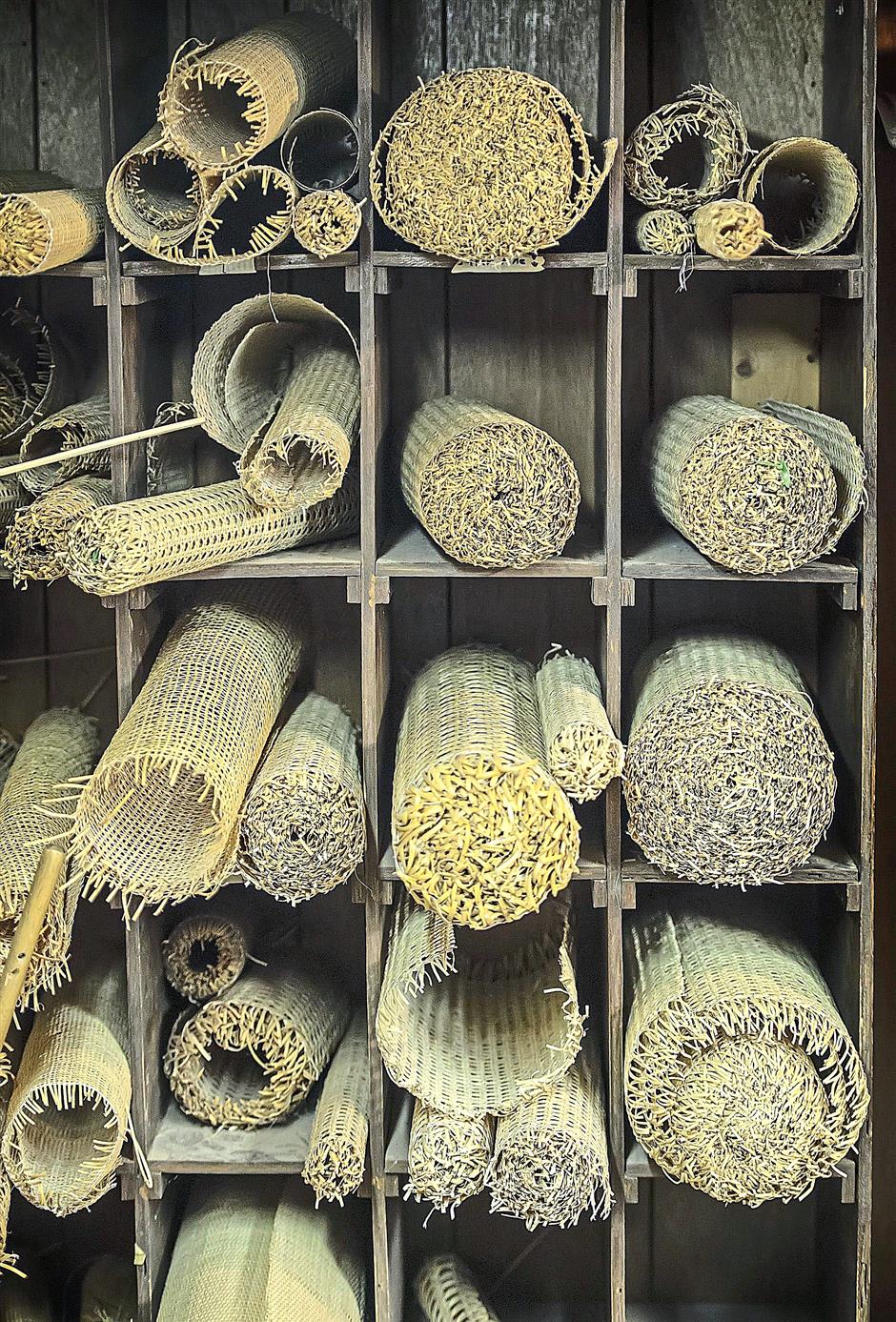 Lee learned caning when he was 11. That’s nearly eight decades of perfecting a craft mostly lost in a modern world. He’s glad to talk about caning. He’d rather talk about women.

“Since my wife died I’ve had about 10 girlfriends,” he said. Now he’s smiling.

Back to the basement and a thousand-foot roll of cane that stretches to the end of a long time. Make no mistake: The work is tedium to the infinity. But caning was considered a “blind trade” when he started in the Great Depression and he was a boy alone in the world.

“No, I wouldn’t be doing this if I could see, but I think I’m pretty good at it,” he said of caning.

No argument from Kansas City’s furniture community. Lee’s skill at double-blind caning, contour caning and caning with medallions is near legendary.

His geometric consistency amazes. Lee says he just feels it. 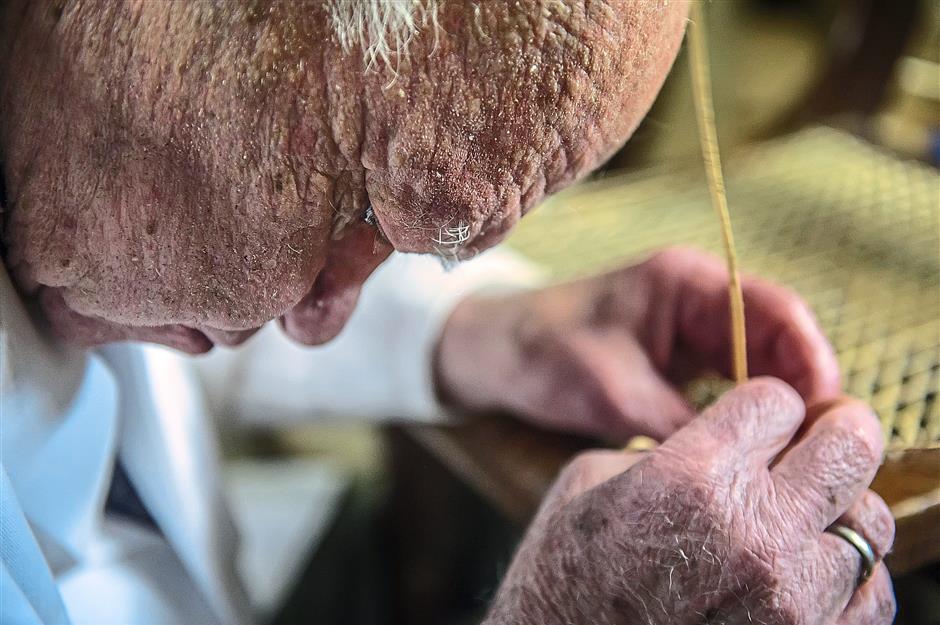 “He’s one of a kind – nobody does what he does anymore,” said Gary Boyce, a manager at Andrews & Abby-Riley, an upholstering company. “I don’t know what we’re going to do when he’s gone.”

People at De Leon Furniture in Kansas City, Kansas, which does a lot of custom work for upscale clients, including some unusual requests, also send work to Lee.

De Leon’s father, Jose, who started the business, first met Lee 50 years ago. He raised both hands, palms out, to make this point: “What he feels, he knows.”

In 1936 at age 11, Lee arrived at the Missouri School for the Blind in St Louis. That had to be hard – leaving home, leaving family. Lee shook his head. No, not really.

“My home wasn’t much,” he said. “We lived out in the woods. Never had anything. My mother made me scrub floors and do dishes all the time.” 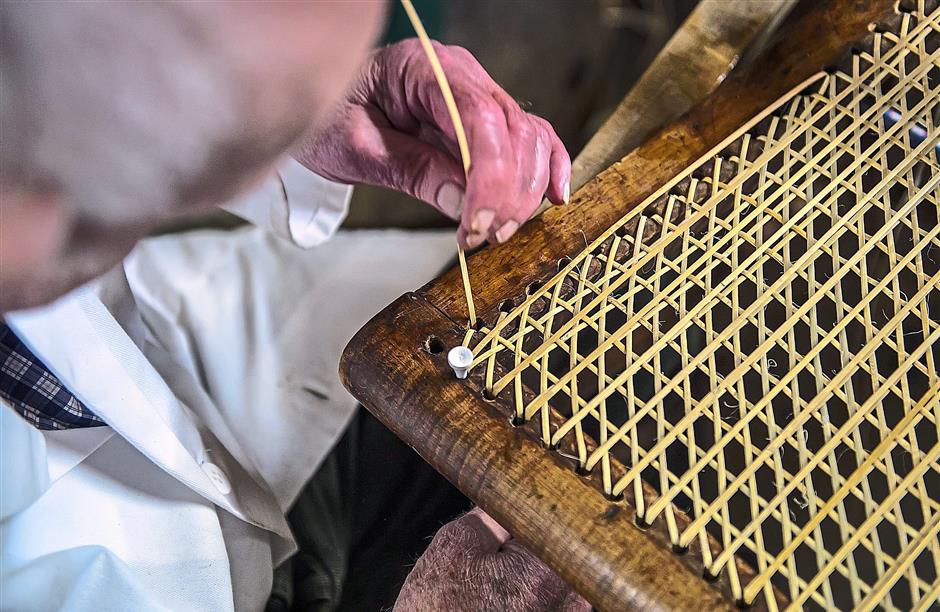 The family lived outside Harviell, Missouri, in Butler County. He was the middle of three sons. It was the Great Depression.

“My father was a dragline operator, if you know what that is,” Lee said, referring to a large excavating machine. “He had a hard time learning you can’t make a living working just part of the time.”

Lee liked it at the new school in St Louis. For the first time in his life, he felt he belonged. “It was nice to go to the bathroom and be warm,” said Lee.

He didn’t exactly wow teachers. He struggled mightily with core classes. But then someone put a strand of cane in his hands.

He hardly heard from his parents again. His mother died two years after his arrival at the school. His father took off for California and later served in World War II.

Over nine years at the school, Lee earned a high school diploma and learned some trades – caning, basketry and making brooms.

And he met Bertie. She had arrived at the school totally blind from a brain tumour. To woo her, he bragged that he was the best caner in town. She thought him a braggart and told him so. But they married the day he graduated and the newlyweds headed to Kansas City.

His first job was at a broomery. He later worked for a Kansas City vending machine company for 25 years, but did caning on the side. Money was always tight, but Bertie refused to put in for a blind pension.

“She thought I made too much money,” Lee said.

Their only child, Stephen, lives in Independence.

“Dad was probably like a lot of fathers in that era in that he came home from work and then did a different job at night,” Stephen said. “He caned chairs. He basically lived his life working for Mum and me.

“When I was little, he gave me an allowance and told me if I wanted anything more, I had to work for it. So I cleaned a lot of chairs. And he sent me to college.”

“You go out there and see Dad down there teaching these guys with perfect vision how to cane,” Stephen said. “It’s pretty amazing.”

By mid-morning in the basement, the two other men have joined Lee. Caning work is long and quiet. They do maybe 10 or 12 chairs a week. On a recent morning, a Lincoln rocker sat in the mix. How old?

Customers pay by the holes that surround the seat of a chair. When Lee started in 1945, he charged eight cents a hole. Now it’s US$1.10. Chairs often have more than a hundred holes.

Albert De Leon has noticed the jump. When asked if Lee has slowed down, De Leon smiled. “No, but he’s more expensive. It would take my guys a lot longer to do the work, though.”

He first met Lee as a young boy.

“For a long time I didn’t know he was blind,” he said.

Now, about those women.

“He always was kind of a ladies’ man,” said Lee’s brother, Joe Harold Lee, who lives in Illinois. “Always had a girlfriend. Even when he was young, he liked to talk to girls.”

These days, he socialises with Martha Kelly whom he’s known since 1950. Lee mentored her husband after the man lost his vision. He died in 2010.

Now Kelly takes Lee to doctor’s appointments and sometimes brings him lunch. He’s been teaching her how to cane. He’s also become a regular at her family’s holiday gatherings.

“He calls me every morning at seven to make sure I’m OK, and I call him at eight at night to read him letters to the editor,” Kelly, 81, said.

“But we don’t get along on everything. He thinks my house is too cold and I think his is too hot.”

They go to musical theatres.

“Well,” he said slowly, “I like being with Martha.”

The other two workers leave at the end of the day. Lee fixes his dinner and goes to bed. But seven days a week, he awakens early and heads down into the dark basement. – The Kansas City Star/Tribune News Service