Homeless addict turns rising artist, thanks to his dog

A former homeless man’s sketches of his dog George are commanding rising prices in a London gallery and have earned him a show in Los Angeles.

From the age of 10 to 38, John Dolan’s life was a rollercoaster ride of abuse, delinquency, neglect, poverty, petty crimes, prison, and homelessness, culminating in a downward spiral addiction to heroin. All that changed, however, when a homeless woman gave him a Staffordshire bull terrier puppy called George.

The responsibility that came with taking care of George initially terrified Dolan. But reminded of happy memories of a childhood dog, he soon warmed up to George. “He was quite an aggressive dog and he would growl at you. He was also a cat chaser and weary of people. But within a month after I started training him, his personality began to change,” Dolan said. “He became a really pleasant dog.”

As George changed his behaviour, so did Dolan, who began turning his life around so he could provide for his furry friend. One of the first things he did was to give up crime. Dolan reasoned that if he went back to prison he would have to give up George and that was simply out of the question. Artist and muse: John Dolan broke away from a life of crime and drugs in order to provide for his dog George, by churning out sketches at his favourite spot in Shoreditch and selling them to passers-by. After three years, Dolan is now building a name for himself in the London arts scene, and sees his works selling upwards of RM16,000.

Unable to get a job because of his past, Dolan took to the streets with George in tow and began to beg. But finding that experience humiliating, he started drawing the dog and the scenes around him, with the cup placed in front of obliging George, and soon curious passers-by were buying his sketches.

Then, in 2013, after having made a little name for himself in the local scene, Dolan had a chance meeting with Richard Howard-Griffin, who runs street art tours in East London and owns a gallery under his name. Howard-Griffin mounted Dolan’s first gallery show in September last year, featuring collaborative large-scale works with other street artists. It was a hit.

Spurred on by the success of his debut show, Howard-Griffin has mounted a second show called John and George, this time focusing on the small pen-on-paper sketches that Dolan launched his artistic career with. 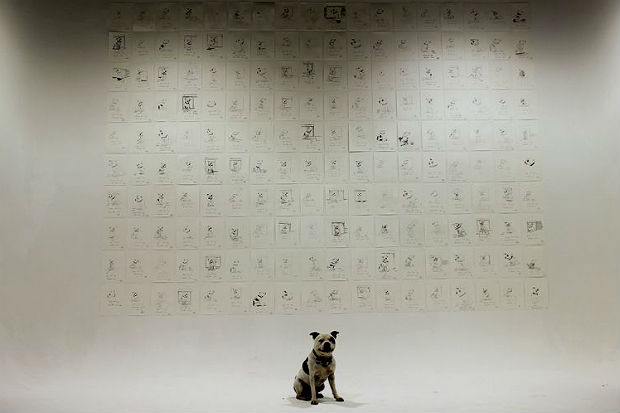 Above, the loveable George and his master's tokens of affection at John Dolan's new exhibition at Howard-Griffin gallery. Below, a sketch of George up close. 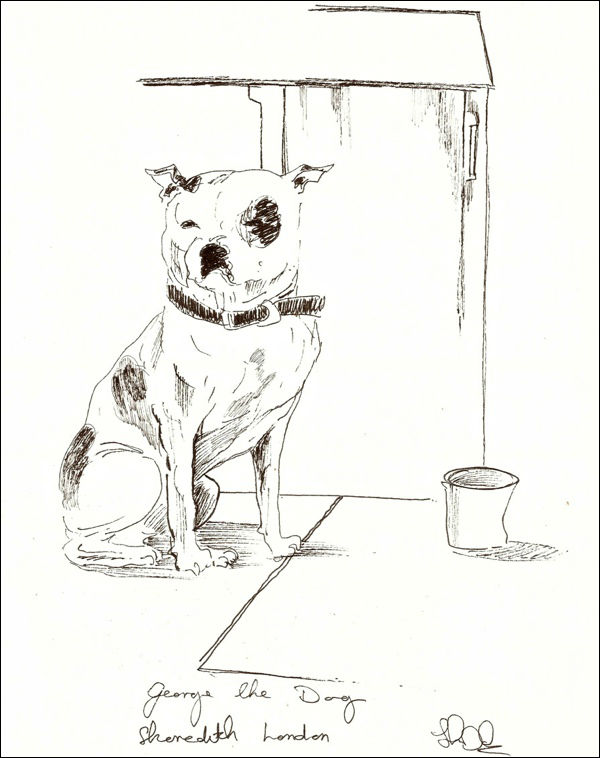 Now, at the age of 43, Dolan, who used to sell his sketches for pocket change, gets between £3,000 and £4,000 (RM16,261 and RM21,683) for them. What’s more, his work is going international, with an upcoming show in Los Angeles. The artist credits it all to George, about whom he’s written a book called John and George: The Dog Who Changed my Life.

“I mean, John’s rise has been really meteoric in the art world. It’s like watching an artist’s career in fast-forward — which is really, really amazing,” Howard-Griffin said. “There’s a real relevance to his work and there’s a real soul in it because it has a true story behind it which is very inspiring, and that’s born out of the work when you look at it.”

Despite the seemingly overnight success and the fact that he can now afford his own lodgings, Dolan still prefers to draw outdoors. And when it comes to his favourite muse, the artist prefers a relaxed approach: “The drawings that I do of him are quite simple,” said Dolan, while sitting in his favourite spot on an east London street. Inseparable: Though they no longer 'beg' on the streets of London, John and George are still the best of pals.

“I’ve done one that’s been in most of the papers. It’s the very detailed one, quite a big drawing. I’ve captured him magnificently in that, but these little ones that I do, I basically try and capture his personality if I can in all of them,” he said.

The current show at Howard-Griffin Gallery runs until Aug 17. In addition to the as-yet-unannounced show in Los Angeles, Dolan also plans to make a book of drawings of rock stars with their dogs to raise funds for a dog shelter. — Reuters