The La Boca Latino Bar chefs prefer to retain the Tex Mex soul in their nachos.

When it comes to nachos, anything goes.

Nachos are among the easiest, and quickest, snacks to prepare. Grab a bag of tortilla chips, grate some tasty cheese over them, throw in a handful of diced anything, stick ‘em in the oven to bake, and voila, you have something super tasty to enjoy in no time at all.

That’s the short version, of course. Now, if you’re feeling a little adventurous, you could add meat and slow-cooked beans to the mixture. Basically, anything goes.

When I was told that nachos are not a Mexican dish, it was akin to finding out that Pluto is not a planet anymore. While nachos are often served at Mexican-American (Tex-Mex) restaurants, they are not a typical dish of Mexican cuisine.

In fact, the only place that Alfredo Hernandez found nachos during his trip to Mexico was at the airport.

“It is not a big thing in Mexico at all. You expect to find it at every restaurant, assuming that it is a Mexican dish (that is how it is perceived) but no, nachos are not authentic Mexican,” said the La Boca Latino Bar manager from his restaurant in Pavilion, Kuala Lumpur.

La Boca serves one of the meanest nachos in town – a messy platter of crispy, sloppy, cheesy goodness that is immensely satisfying. Apart from Pavilion, there’s La Boca Cafe at the Life Centre offering KLites a taste of the dazzling flavours and vibrant culture of Latin America.

Although nachos were invented in Mexico, they were modified to suit the American palate – perfectly marrying the taste and characteristics of the border regions of Texas and Mexico, and it wouldn’t be far from the truth to say that the dish is as American as apple pie.

According to Josh Chetwynd, the author of How The Hot Dog Found Its Bun – in which he claims that some of our greatest culinary achievements were simply by-products of “damned good luck” – nachos were the result of a bit of creative thinking and a missing chef.

It was reported that during World War II, Americans who lived at the Eagle Pass, Texas base would cross the Rio Grande River to the nearby Piedras Negras town in Mexico. And it was during one of these trips that a group of army wives visited the Victory Club, a famous restaurant back then, for a quick bite.

They were greeted by the restaurant’s maitre d’ Ignacio “Nacho” Anaya. While he was happy to entertain the ladies, he couldn’t locate the cook.

Instead of turning the ladies away, the quick-thinking Nacho looked around the kitchen and created a dish out of the ingredients he found.

According to The Oxford Companion To American Food And Drink, that was a plate of tortilla chips, cheese and jalapeno peppers.

Nachos, named after the inventor of course, was born. The dish gained further popularity when Frank Liberto – also known as the Father of Nachos – started serving them as stadium food at the Arlington Stadium (then the home ground of baseball’s Texas Rangers) and the rest as they say, is history.

“It takes as little as two ingredients to make nachos, but we like to serve the tortilla chips with Pico de Gallo (Mexican salsa), refried beans, guacamole, pinto beans, sour cream and melted cheese. We keep it simple, but tasty,” said Hernandez.

The La Boca chefs create everything from scratch – except for the tortilla chips. “We have flour tortilla and corn tortilla. The round flour tortillas are used for burritos and quesadillas, and the corn tortillas for nachos. We cut them into triangles and deep fry them to make totopos (the crunchy triangular chips) – which can also be simply dipped into salsa and/or guacamole, and enjoyed that way,” added Hernandez. “We serve tortilla chips with tomato salsa, and the dish is also available with meat,” said Rabindran, adding that there really is no set rule as to how one could enjoy nachos.

“Can anyone tell us what to have on rice? These tortilla chips serve as vessels to put toppings on – which could range from the basic guacamole and salsa to chicken curry,” said the chef of seven years.

The recipes are easy to recreate and show that tortilla chips do go well with other dips besides the usual cheese, guacamole and salsa combo – on top of proving the point that enjoying nachos doesn’t always have to be a messy affair. 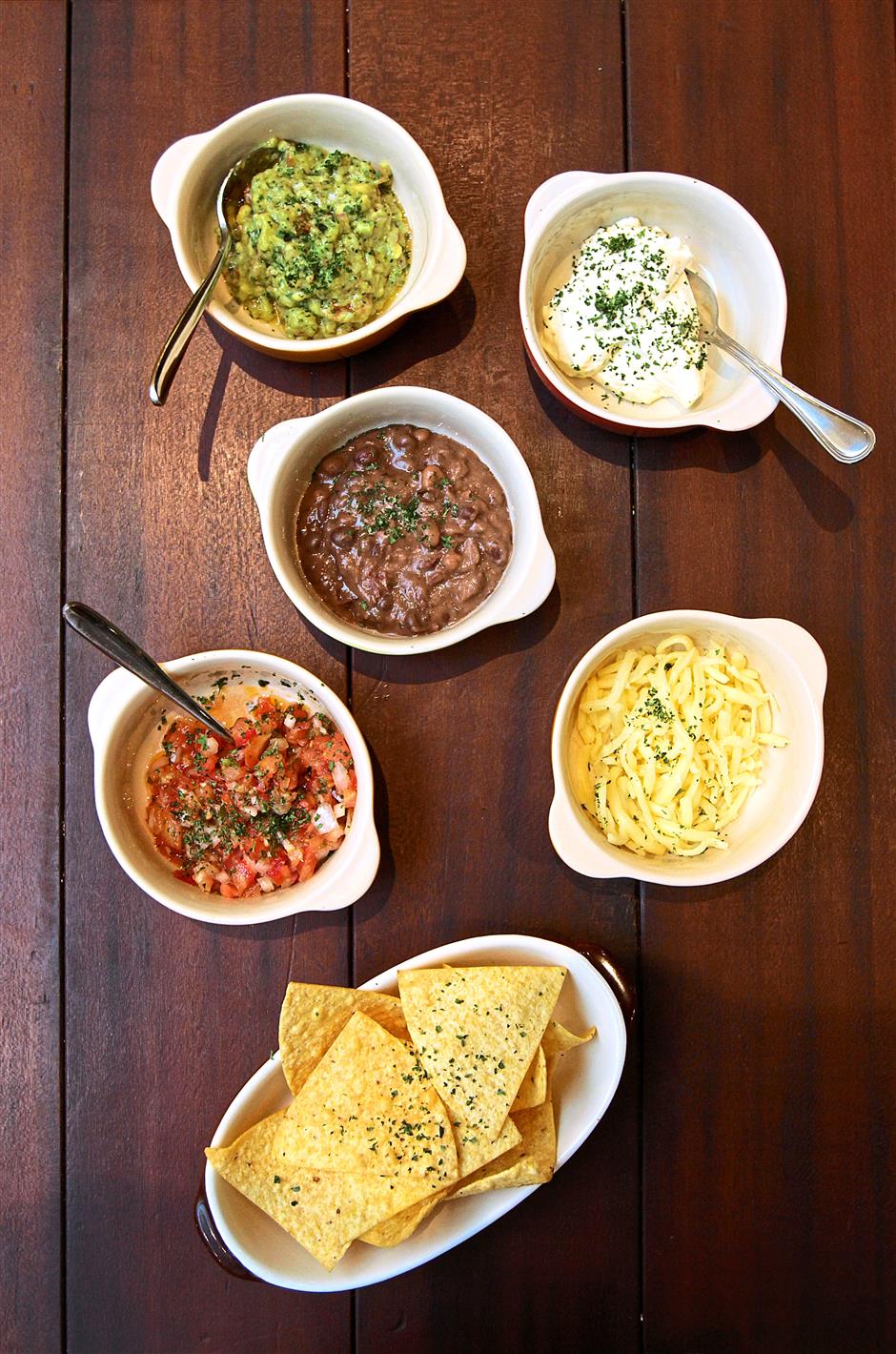 Although Hernandez and Rabindran share different views when it comes to serving nachos, they agree that at the end of the day, the freshness of the ingredients used in the dish is of utmost importance.

“You could use anything, say tomatoes, for the salsa ... but using the freshest and top quality tomatoes makes a lot of difference to its taste. I believe that it is the only secret to making good nachos,” said Hernandez.

He also added that balance is key when making nachos.

“You have to sacrifice the flavour of some ingredients in order for them to work together and create their magic. For example, if you taste our refried beans (used in the nachos) separately, it wouldn’t taste as good as you expect it to be. But when you add it in with the other ingredients – the sour cream and so on – it tastes perfect.

“So, I think that learning to add and lose flavours will help in creating the perfect balance for your nachos. Of course, you can only learn that through trial and error.”

The chefs recommend the La Costena Mexican range of tortillas for making totopos or tortilla chips, available at leading supermarkets such as Jaya Grocer, Village Grocer, Cold Storage, Sam Storage and Isetan in the Klang Valley, Penang, Perak and Johor. Otherwise, you can use store-bought unflavoured tortilla chips. 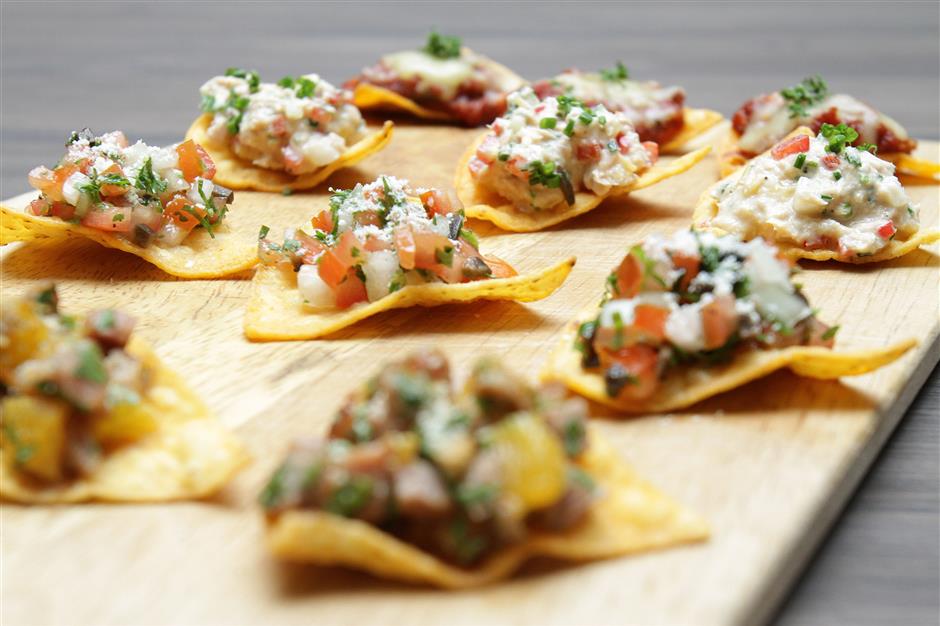 Head on to these places for a quick nachos fix

Nachos with a twist – four recipes to try