TV start: Chua Guan Leong, who is originally from Malaysia, was a contestant on The Taste, a British television cooking competition.

CHUA Guan Leong got the thumbs up for his Malaysian Sambal Prawns and a place in the final 12 on The Taste along with his most memorable moment on the show: Anthony Bourdain asking – nay, imploring – him to work with him because “together we will make music”.

It took Bourdain, one of the mentors on the British television cooking competition (think of it as a cross between MasterChef and The Voice), just a spoonful of Chua’s dish to persuade him to join his team. “We were born to work together ... I implore you, come with me.”

The Taste pits professional and novice cooks against each other in a blind competition. The contestants are grouped into teams, each with a mentor – Nigella Lawson, Ludo Lefebvre and Bourdain – who also judges the best dish in each episode based on a single spoonful.

Chua, 27, has lived in Britain for 12 years. He is originally from Malaysia, so it is not at all surprising to learn that he “grew up in an environment where food often takes centrestage, be it round our family table or out in one of the country’s countless eateries”.

The judges on The Taste, a British television cooking competition (from left) Ludo Lefebvre, Nigella Lawson and Anthony Bourdain.

“My strong affinity to all things food is a result of being nurtured on divine Straits-Chinese cuisine, lovingly prepared by my nanny,” he says in an e-mail interview.

Chua’s dream job was the one the multi-hyphenate Bourdain had: a professional eater and drinker whose work allowed him to travel the world. In real life, Chua worked at Goldman Sachs as a financial analyst.

But his interest in food was strong. He started a food blog called The Boy Who Ate the World and tried to retrace the food trails in London and Europe that he had seen Bourdain go on in his TV show, No Reservations.

But after five years at the investment firm, he decided to resign and in January last year, he enrolled for nine months of culinary training at Le Cordon Bleu London – to the chagrin of his mum.

“Eventually, the Tiger mother was convinced. Not that she had much of a choice anyway – she wasn’t paying my school fees anymore,” Chua says. The Cordon Bleu course focused on the fundamentals of French cuisine and European fine dining techniques, which helped him hone his cooking skills and culinary knowledge, but he also applied that training to his Asian dishes.

Armed with his newly acquired know-how, Chua auditioned for The Taste (this British version follows the format of the US series which has already run for two seasons) and won a place in the last 12. Bourdain became his mentor. (Incidentally, Lefebvre had also wanted Chua on his team based on the sambal prawns.)

But in a cooking competition, you’re only as good as your last dish. In one episode, Chua’s undercooked grilled lamb landed him in the bottom three.

“What can I say, things don’t always go to plan when you’re cooking against the clock on national television! The judge’s criticisms, though harsh, were fair in my view,” he says.

Chua survived elimination then and managed to stay in the competition until the final six.

In his exit interview which appears on the show’s web page, he said: “Before The Taste, I felt I was at a crossroads, deciding between a career in food or heading back to my old day job in finance. Having the chance to work with the mentors and other fellow contestants has really inspired me. It has only reaffirmed my love for cooking more and given me the belief that there is a life and career for me in food, after all.” 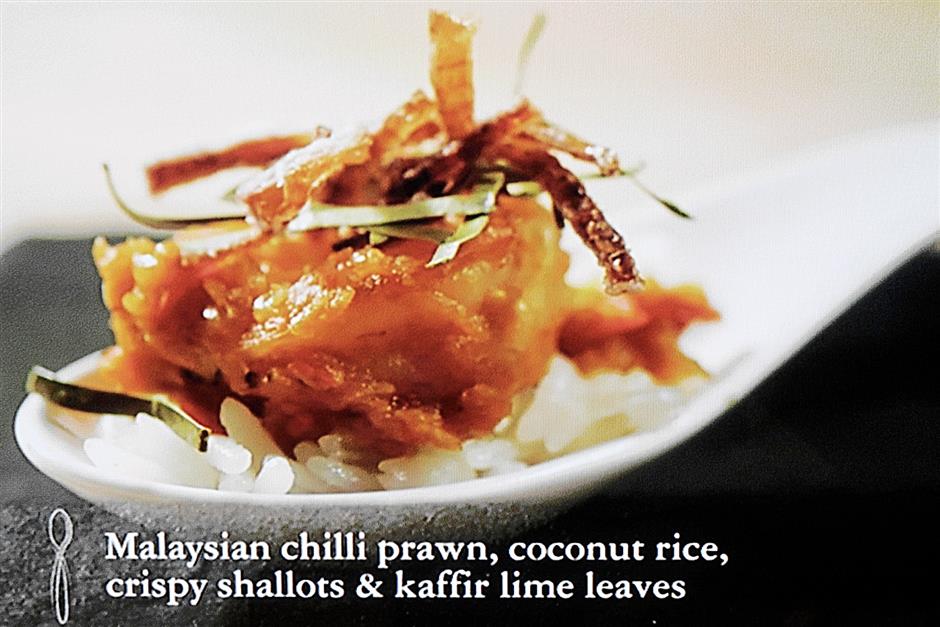 A screen grab of the Malaysian Sambal Prawns prepared by Chua on the British television cooking competition.

With that, Chua has made a serious, albeit small-scale, venture into cooking. A few times a month, he hosts a Malaysian Supper Club out of his flat in London. On the menu are staples of Nyonya cuisine like Kuih Pie Tee, Lobak and Sambal Udang.

“It’s been a long-standing dream of mine to put Nyonya food on the map in London and the supper club gives diners an informal environment to sample some of the dishes I would have grown up eating round the family dinner table in Malaysia.

“Guests bring their own drinks and there’s no set cost to the meal – people donate whatever they feel the meal is worth into an envelope at the end of the evening.

“It’s been a truly rewarding and exciting experience hosting everybody from close friends to complete strangers and seeing them enjoying the meal! Who knows what’s to come next? I’m already looking into hosting larger scale ‘pop-up’ events outside of my home and may look to get a foot into London’s increasingly vibrant street food scene to feed Malaysian food to the masses here.” 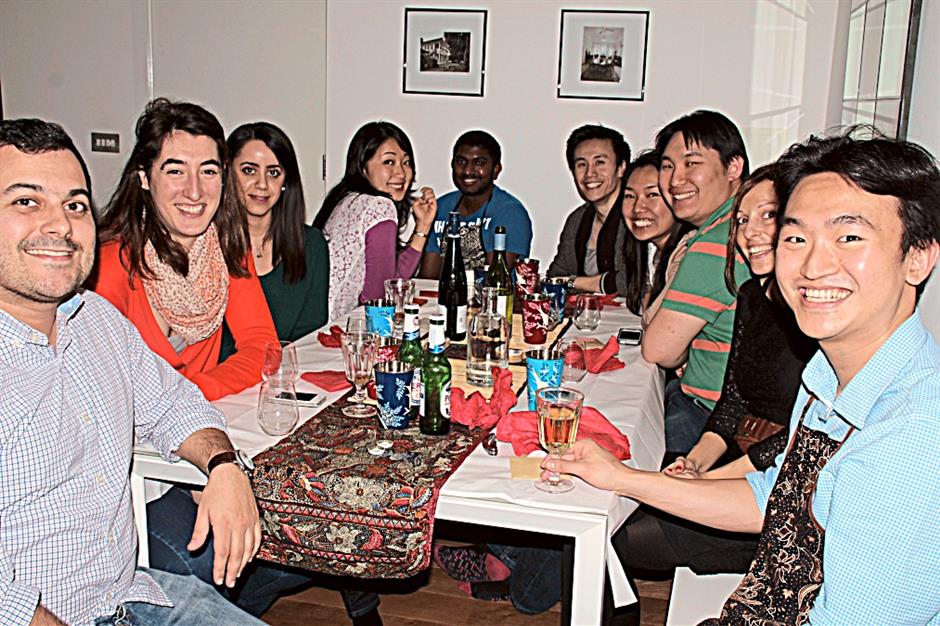 Here are more insights into Chua’s life in food.

• The most memorable dish I’ve ever cooked has to be my Nyonya Sambal Prawns which I made for the televised auditions of The Taste. The crazy excitement and pressure of cooking on national television aside, I was thrilled to hear such positive comments about my dish from the three judges. I will forever remember Anthony Bourdain’s words to me after tasting my dish: “I love the country, I love the food ... It’s a solid, solid yes. We were born to work together ... together we will make music.”

• Anthony Bourdain is really as witty and articulate in real life as he comes across on TV. I had always wondered what the Anthony Bourdain I had seen on TV would be like in reality. The truth is he’s every bit as down to earth, laid back and “Mr Cool”.

But what impressed me most of all was his remarkable food knowledge. This is a man who could pinpoint the Malaysian Nyonya roots in my Sambal Udang dish without knowing who had cooked the dish or where it had come from.

He coached me through the finer points of making everything from a Mexican mole sauce to a Thai som tam salad, and is as well-versed in Asian food as he is in European cuisine.

It was an absolute privilege to have the chance to meet and work with him on set. 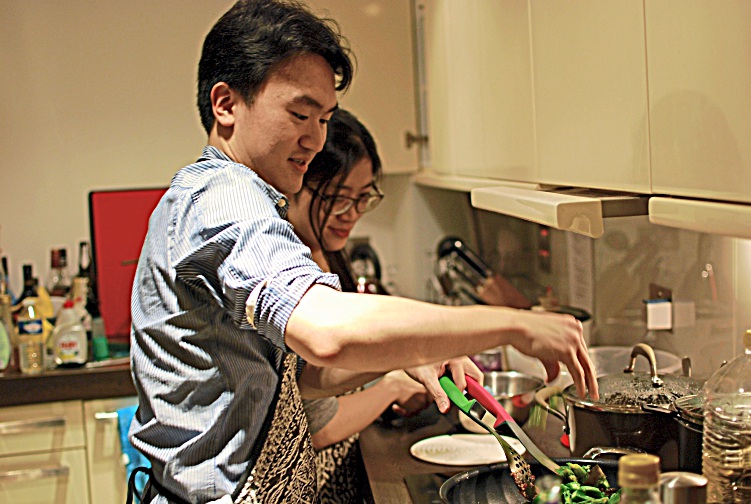 • I think Malaysian food is still very under-represented in Britain. The majority of non-Malaysians here have never tasted Malaysian food, whilst the small minority who have think all we eat is Chicken Satay with peanut sauce! One of the reasons I chose to fly the flag for Malaysian food in the earlier episodes of The Taste was to challenge this misconception and show those less familiar with our cuisine just how multi-cultural, diverse and steeped in heritage our food culture really is.

• My favourite gadget in the kitchen is the pressure cooker. It’s amazing to be able to braise meats till they are melt-in-the-mouth tender, all in a fraction of the time it takes in a conventional oven or on top of the stove. A very handy gadget if you ever want to whip up that rendang or stew in under an hour!

• Squid is a very underrated ingredient and one of my favourite things to cook. Not only is it relatively very cheap but it’s also incredibly versatile. There’s a whole host of delicious dishes from deep-fried to stir-fried to braises that it can be used for. Plus, the squid ink sacs are lovely to flavour pasta and rice dishes with!

• I sometimes sneak in a tablespoon of tomato purée into my curry pastes and rempah. Yes, it’s completely unconventional (some would say a crime) but I find it gives the final dish a beautiful colour, sweetness and depth of flavour you just can’t achieve by using sugar alone.