From 'microjewel' snails to the magnificent Tok Belang, the past year marks another sad chapter in the tale of our country’s vanishing biodiversity. (This report has been updated with corrections – Editor)

Among the many subplots of humanity’s great symphonic rise to power and domination here on Earth is the pathetic wheeze that represents the depletion of the planet’s biodiversity. While extinction of species is more or less expected in the grand narrative of evolution, there’s something truly disturbing about the natural world’s recent decline.

As revealed in Elizabeth Kolbert’s latest book, The Sixth Extinction: An Unnatural History, humanity has become the biggest driver of what some scientists are calling the biggest mass extinction since the dinosaurs were wiped out by an asteroid. It’s the first time in Earth’s history that a single organism has managed to overwhelm the ecology to such a degree that we’re not just making it hostile to other creatures but also ourselves.

This mass extinction was brought close to home when the International Union for Conservation of Nature (IUCN) Red List – a list that tracks threatened species across the planet – was updated this year. In its evaluation of 76,199 species, which represents only about 4% of 1.8 million species known to science, it's deemed that 2,413 are under threat. Meanwhile, 28 were added to the list of extinct species.

Sadly, a tiny, rare snail named Plectostoma sciaphilum that was endemic to Malaysia was among the 28.

Part of a family of snails that scientists have called “microjewels” for their delicately formed shells and minute size, Plectosoma sciaphilum used to live on the side of Bukit Pancing, a 300m limestone hill in Pahang. The snail apparently found its ecological niche on the hill, living and evolving there in relative isolation for millennia. Then, between 2003 and 2007, excavators levelled the entire hill. Since the snail can be found nowhere else but on Bukit Pancing – the hill is now a lake – it’s assumed that, like the dodo and the West African black rhino, Plectostoma sciaphilum is gone forever.

The fight is now on to save fellow snail Charopa lafargei, which can be found only on Gunung Kanthan in Perak, currently being quarried by Lafarge. Despite pleas from environmental groups to save the limestone hill – it’s also home to a trapdoor spider, Liphistius kanthan, also found nowhere else – half of it is already gone.

The snails’ plight brings up an important point about our knowledge of species under threat. Most of the time we don’t even know that they’re there. A lot of animals look alike at first glance, but DNA testing reveals them to be distinct species or sub-species unique to a specific area. And they’re also not easy to count. Can we save these two critters? Gunung Kanthan, a limestone hill in Perak currently being quarried by Lafarge, is home to Charopa lafargei (above) and Liphistius kanthan (below). These two species are completely endemic to Gunung Kanthan. Once the hill goes, photos will be all that's left of them. – Liew-Thor Seng & Liz Price, cavingnews.com Next page: Believe it or not! Malayan tiger numbers are down to 250! Malayan tiger: Estimated to have numbered about 3,000 in the 1950s, the post-Merdeka years have proven detrimental to these magnificent cats. Only between 250 and 340 individuals are left in the jungles of Peninsular Malaysia.

Ask any Malaysian what the national animal is and most will tell you – correctly – that it’s the Malayan tiger, the smallest of the six remaining sub-species of one of the world’s most beautiful cats and completely endemic to the Malay Peninsula.

And yet when news came out in September that the Malayan tiger (Panthera tigris jacksoni) had drastically dropped in numbers – from an estimated 500 in 2007, to current estimates of between 250 and 340 individuals, down from an estimated 3,000 in the 1950s – hardly anyone seem surprised.

Despite having pride of place on the nation’s coat of arms, featuring prominently in traditional folklore and even lending its symbolic stripes to various national athletes over the years, the Malayan tiger’s fate seems destined to stalk the jungle trail towards its own oblivion – to our apparent indifference, not to mention apathy.

Joining the tiger on the sushi train to extinction paradise is a host of other species. In fact, Malaysia ranks among the top 12 countries in the world with the most number of endangered mammal species on the IUCN Red List, with 71 species about to vanish forever.

To give you a depressing picture of what we’re on the brink of losing, below is only a list of 12 Malaysian mammals whose existence is currently under threat. (EN = endangered; CR = critical)

Through it all, it seems rather apt that the lesser mouse deer (Tragulus kanchil), the wisest of the folk tale heroes of Sejarah Melayu (Malay Annals), has managed to evade the Red List's danger zone. But before you celebrate, it’s only because data regarding its numbers in the wild hasn’t been updated for a few years. The truth is, for the kancil and many species in Malaysia, we just don’t know how safe they really are. 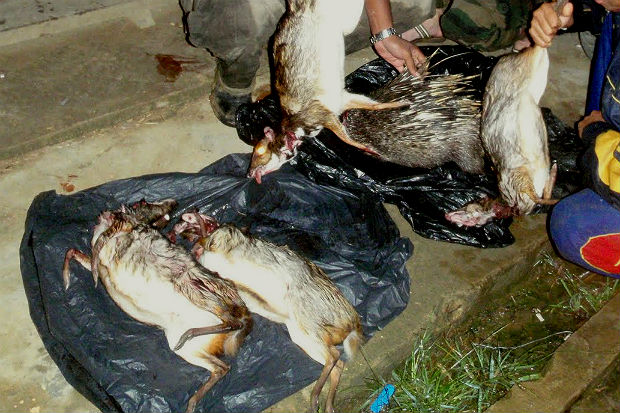 Data deficient: The lesser mouse deer, or kancil, has not been listed as endangered so are still exempt from protective legislation. However, data about their numbers in the wild remain inconclusive. So, while they're being hunted for game, as shown above in a photo taken in 2011 in Malacca, no one really knows if their numbers are still abundant or if they're nearing extinction. Below, a photo purportedly taken in Indonesia of pangolin foetus stew. 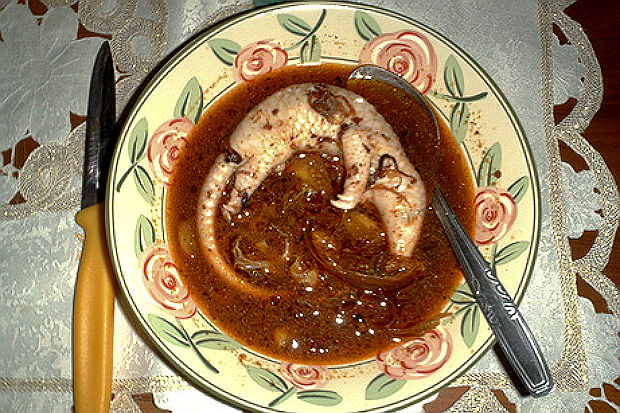 While destruction of habitat is the deadliest weapon we’ve deployed in our systematic killing of non-human animals, poaching has also done much to speed up the process. Deriving its name from the Malay word pengguling (“something that rolls up”), the pangolin is now under threat from China’s insatiable appetite for exotic animal products.

The Chinese folk belief that eating pangolins energises a mother’s health after she gives birth has driven up demand for the ant-eating mammal. As a result, all eight species of the pangolin – including the locally found species, the Sunda pangolin (Manis javanica) – face extinction from systematic poaching.

Still, pangolins are only one of a cast of thousands being sent to the stoves stoking humanity’s appetite for destruction. After years of over-exploitation by sashimi connoisseurs, the Pacific bluefin tuna (Thunnus orientalis) and Chinese pufferfish (Takifugu chinensis) finally join the critically endangered list.

Across the Pacific, the American eel has finally failed to slip through fishermen’s nets – they too are now an endangered species. Coral reefs, sea grass meadows, mangrove swamps – all important marine habitats – are under siege by pollution, invasive species, ocean acidification and global warming. Hardly any habitat is safe from human disturbance.

Australia shocked the world when it requested for the Great Barrier Reef, the largest coral reef in the world, to be taken off the list of UNESCO's World Heritage sites. 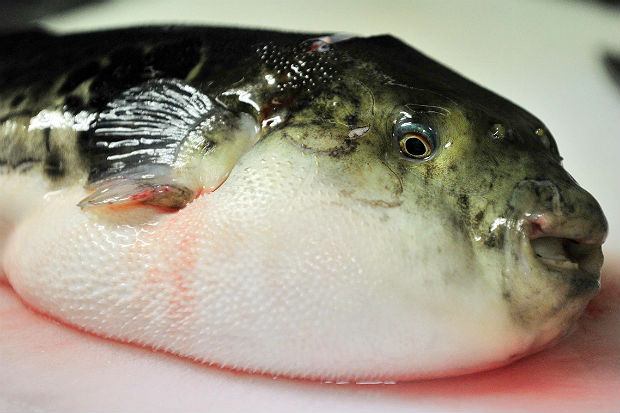 Eaten to death: A Chinese pufferfish waits to be chopped up into sashimi at a restaurant in Tokyo, Japan. After years of over exploitation, it's now been put on the critically endangered list.

Next page: Not all is hopeless – new species found in Malaysia! Frog and flower: Two new species were discovered this year in Malaysia. Above, a new species of frog called Hylarana centropeninsularis. Below, a new species of flowering plant, Meiogyne kanthanensis, discovered on Gunung Kanthan, in Perak – which is already under threat of disappearing since the hill it lives on is being quarried. 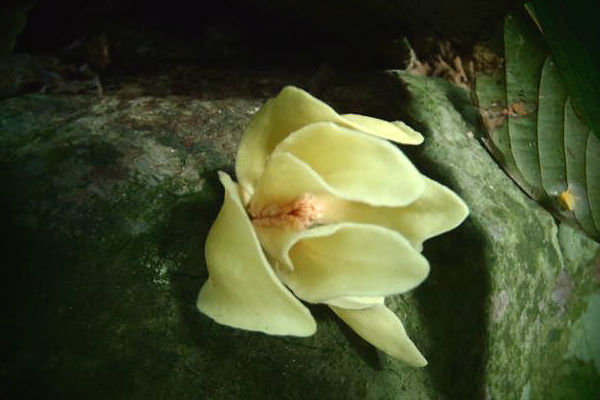 While the story of Earth's biodiversity seem headed for a bleak ending, there has been good news from the Malaysian wilderness in 2014. A new species of frog, Hylarana centropeninsularis, was discovered by University of Malaya herpetologist Juliana Senawi. The frog was already known to scientists but was mistaken to belong to a similar-looking species found in Indonesia.

With the help of Chan Kin Onn, a Malaysian doctoral candidate at the University of Kansas, the two researchers managed to prove that the local amphibian was a genetically different frog, thus earning its own entry in the big book of life.

To go with the new frog is a new flower. Discovered by Dr Ruth Kiew, Meiogyne kanthanensis can only be found on Gunung Kanthan. It's said to only flower during certain months of the year and when it does, its blooms exude a citrus-like aroma.

And that's not all. Two more new species, Gymnostachyum kanthanense and Vatica kanthanensis, were also found on the same hill.

But, as you may have read earlier in this article, Gunung Kanthan is currently being quarried. If we're not careful, these plants will most probably join IUCN's extinct list in 2015.