Malaysian weather in 2014 (from left): The low water level in the Sg Selangor dam near Kuala Kubu Baru in September; a car that had been swept by flood waters against the wall of a house in Ringlet, Cameron Highlands; a mini-tornado in Pendang, Kedah, captured on video.

Longer droughts, flashier floods, muddier landslides, and tornadoes! We take a look at some of the year’s weather extremes from around Malaysia.

It’s not as if we didn’t have prior warning. Climate change scientists have been giving us environmental doomsday stories for years – Hollywood even turned some of them into blockbuster movies. Still, whether or not the more extreme weather we've been experiencing can be connected to the effects of climate change remains inconclusive.

But you’d have to be living under a coconut shell if you haven’t noticed that Mother Nature isn’t as predictable as she used to be. Even though we'd like to boast that we don't have it as bad as other countries like the Philippines, currently being lashed by the worst typhoon in living memory, ask any Malaysian and all of them can tell you how our local climate has gotten a bit more extreme.

From longer droughts to muddier landslides around Malaysia, 2014 continues the trend of more extreme weather – whether we liked it or not.

First there was no water 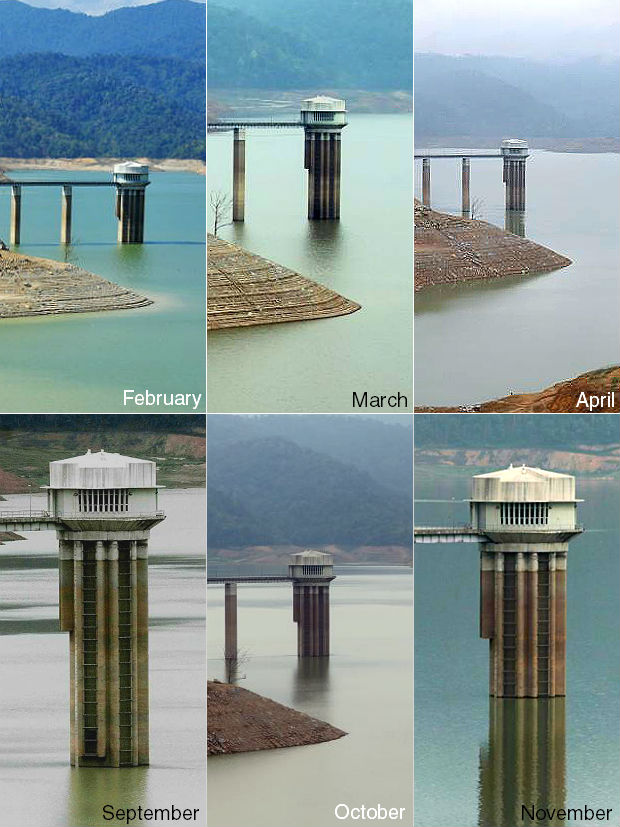 Diminishing: The water in Sg Selangor dam in Kuala Kubu Baru (above), which supplies most of the drinking water to the Klang Valley and its surrounding areas, reached critically low levels from the beginning of the year and lasted for many months before recovering sometime after Oct 2014. Normally, the water in the dam should cover the brown half of the marker.

Selangor's water woes began in 2012, when reservoirs started drying up. While it fluctuated in 2013, things were mostly still tolerable. But 2014 was the big one, with the whole state experiencing a year-long drought that prompted Syabas to exercise a water-rationing exercise in March and April that affected millions of residents and businesses.

Thankfully, the water level in dams have recovered with the return of rain since September. Nevertheless, with longer droughts and lesser rainfall, the government concedes that water-rationing may be an annual occurrence, at least until the Langat 2 dam project is expected to finish in 2017. 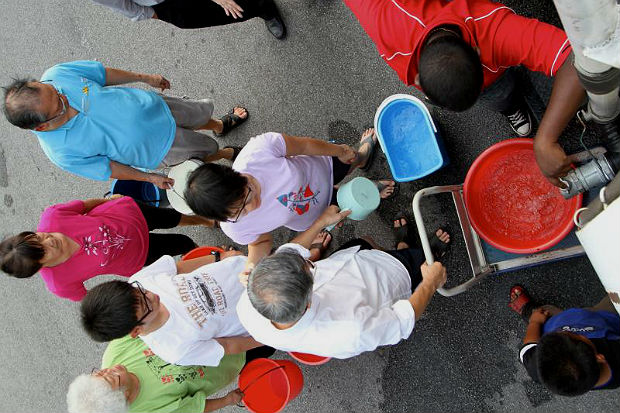 Crisis: The water problems in Selangor, which some would say was made worse by the state's political troubles, prompted a water-rationing exercise in March and April that affected millions of people. Above, Cheras residents affected by water-rationing wait in line to fill up buckets from a Syabas tanker. Below, the water-rationing inspires Nik Nur Haswani Yusoff to collect rain water at her house in Puchong Utama. 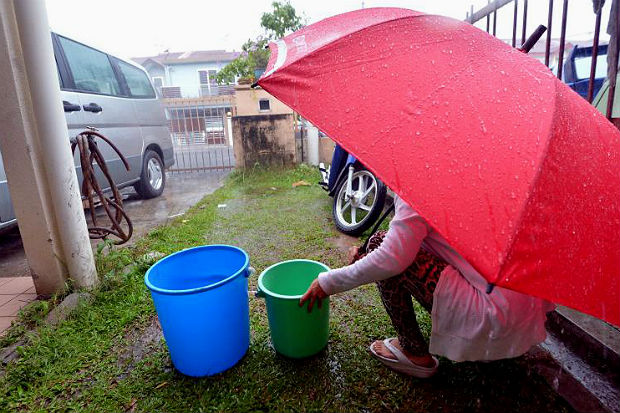 Then there was too much water

While Selangor didn't get enough rain, some other states got too much of it. Days of persistent rain on Sabah's west coast caused floods in early October. The district of Penampang got it worst as fast-rising water forced supervisors at nearby Babagon dam to release the excess, causing the flood that inundated residents for days. While the area itself has previously seen flooding, the last time it was this bad was more than a decade ago. 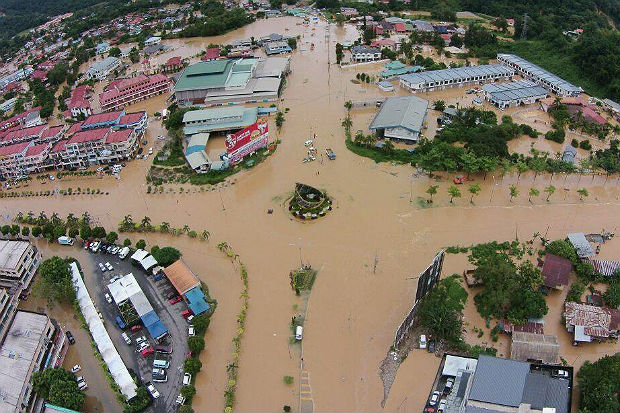 Soaked: Above, an aerial view of Donggongon township in Penampang, Sabah, with major roads inundated by the milky brown flood water in early October. 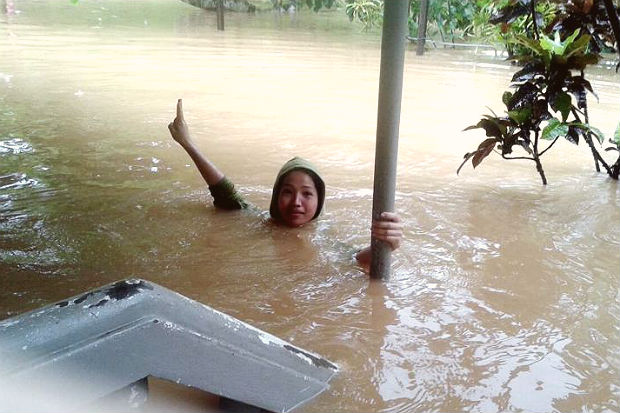 "OK bah": A resident of Kg Pogunon, in Penampang, signals that all is apparently well, despite the deluge. 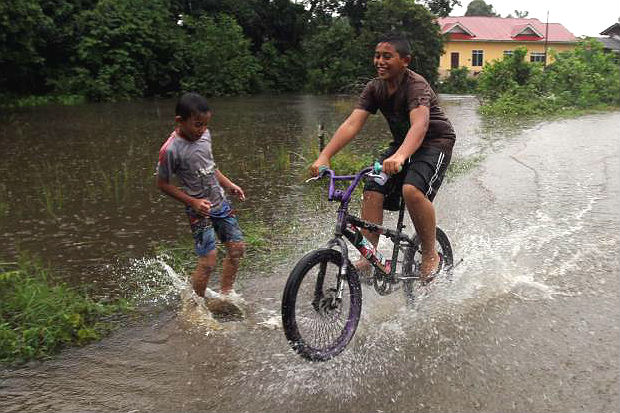 In Kuala Terengganu, two children are seen at play in a puddle caused by a minor flood in November. 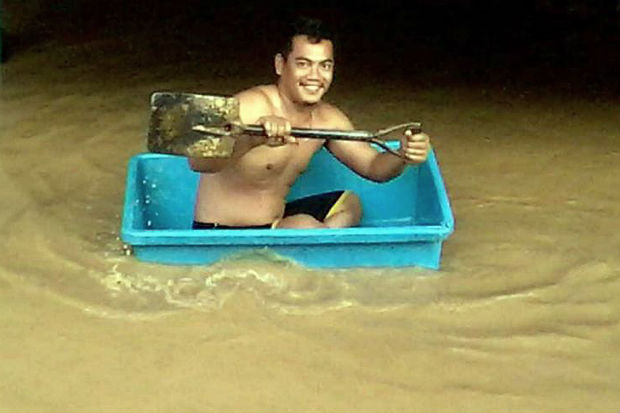 Not too bad: A man turns a basin and spade into a mode of transportation during a flood that hit Beaufort, a town in Sabah, in February.

And then the earth moved

Barely a month after the floods in Sabah, torrential rain let loose a double whammy of flash flood and mudslide upon residents of Ringlet, 4km from Bertam Valley in the Cameron Highlands, in the state of Perak. Particularly affected were the residents of the small town of Ringlet and the surrounding villages. With no warning at all, the gush ripped through the area, sweeping cars, destroying farms, and leaving houses coated in mud and debris. Five people, including a 13-year-old boy, were killed in the resulting tumult.

Sadly, flooding and mudslides in the Cameron Highlands have happened many times in previous years, with experts saying that they're caused by excessive land clearing. There's simply not enough vegetation on the hillsides to hold the ground together, especially during the rainy season. While steps have been taken to prevent more of such disasters happening in the future, the damage from this year's flood may have been too much. 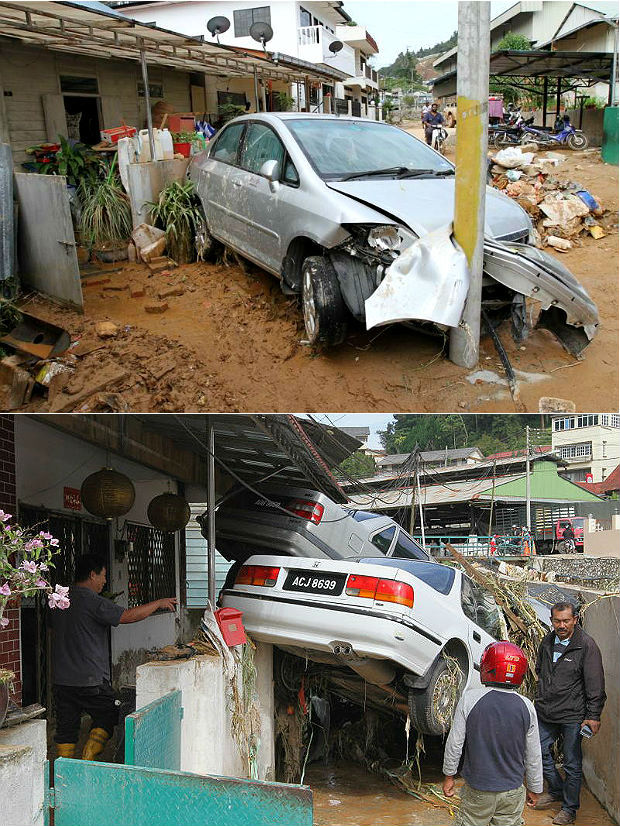 Devastating: The combination of flash flood and mudslide sweeping through Ringlet, near Bertam Valley in the Cameron Highlands, in the wee hours of the morning of Nov left in its wake wrecked cars (above) and mud-filled houses. 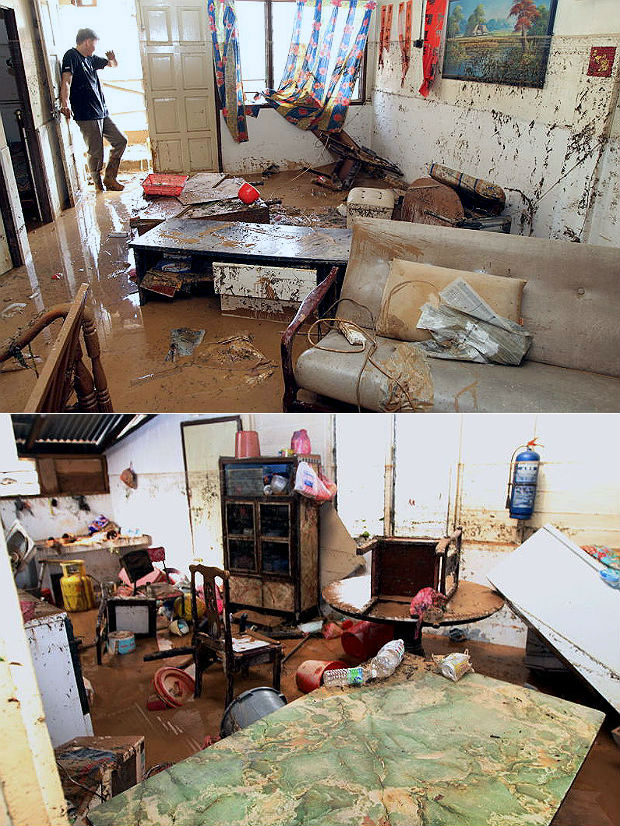 Rains also caused isolated cases of flash floods, landslides and mudslides in various part of the country, mostly affecting roads and property, and ultimately, people. Though none were truly devastating like the one that brought down Highland Towers in Bukit Antarabangsa 21 years ago, the wreckage they left behind still makes one wonder if perhaps Mother Nature wants to tell us something really important. Mudslide along Km 13 of the Kg Raja – Pos Slim Road in the Cameron Highlands in late September. 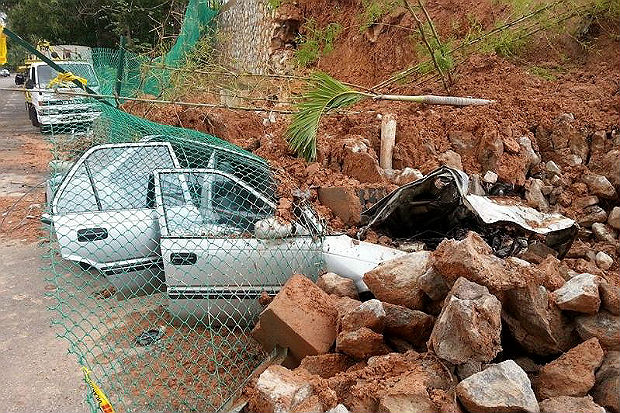 Landslide at Taman Cheng Perdana in Malacca in early June that totaled this car. Fortunately, no one was harmed in this incident. Landslide at Gerbang Meru Indah, a residential area in Ipoh, Perak, in May. 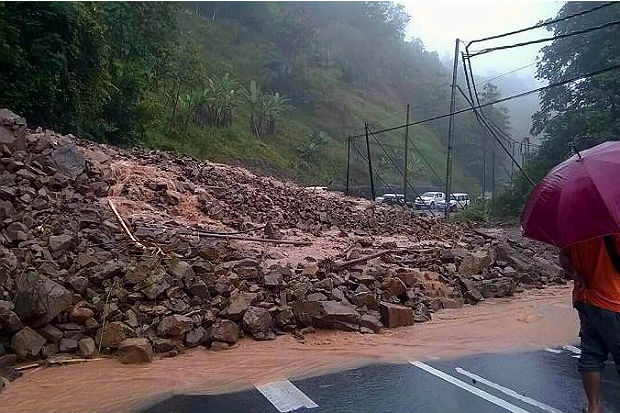 Landslide buries the road between Kota Kinabalu and Ranau in rubble in early November.

And then came the tornadoes

By far the freakiest weather occurence this year happened in Kedah in October, when a series of minor tornadoes hit the northern state popular known as the "rice bowl" of Malaysia. While the twisters didn't claim any lives, it did cause damage to property and astonished the rest of the country. There were also reports of similar mini-twisters happening in Klang and Johor Baharu. Though no unheard of, tornadoes are rare in Malaysia. And to have a few occurring in a single year was a sign that there's truly something strange in the air.