At the 15th annual North American Wife Carrying Championship, clingy couples may have an unfair advantage – but those with humour may enjoy it more.

Men with their wives slung over their shoulders bound over log hurdles and charge through a muddy pit on a mountainside in the US state of Maine on Oct 11, as hundreds of spectators cheer them on at the North American Wife Carrying Championship.

The annual event, now in its 15th year, held at the base of a grassy ski mountain at the Sunday River resort in Maine has all the trappings of a serious competition. There were fit competitors in numbered bibs, a precision clock and a winners podium, but from the moment the announcer declared “saddle up!” as signal for the couples, it was clear this competition was as whimsical as they come. 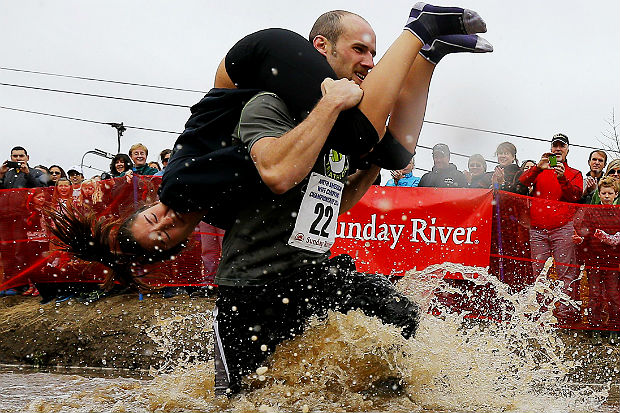 "She ain't heavy!": Richard Cannon carries Annie Leslie (above) through the water pit while competing in the North American Wife Carrying Championship at Sunday River ski resort in Newry, Maine. Below, Shane Arnold and Brandy Bates (foreground) clear the second obstacle ahead of Ian and Susan Bell (left). – Reuters Competitor John Lund, sporting big spikes protruding from shoulder pads, studded wristbands and a skeleton mask. “The people in Finland put together this event because they felt there should be at least one news story in the year that makes people laugh,” says Lund, who spent four years in Finland, the birthplace of wife-carrying as a modern sport.

The competition began there in the 1990s and was inspired loosely by the legend of a 19th century outlaw who tested the mettle of his gang of robbers by having them run an obstacle course with a woman on their backs. The sport has since gained enthusiasts around the world. The event in Maine is one of several official qualifying competitions for the international championship in Finland – the other qualifying rounds are held in Australia, Sweden and Estonia. 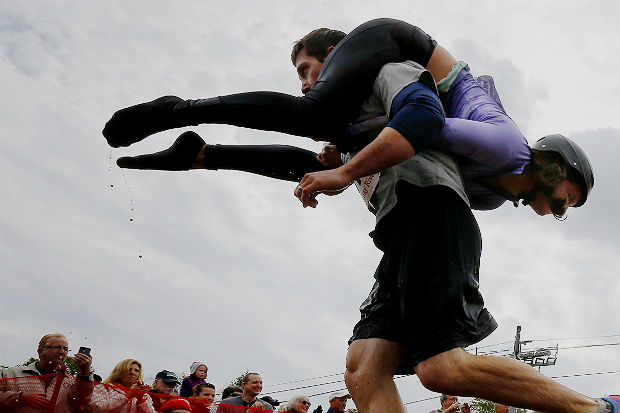 Nathan Johnson carries Tia Johnson (above) out of the water pit while Brian Chin carries Kerrie Keller (below) towards the finishing line. – Reuters 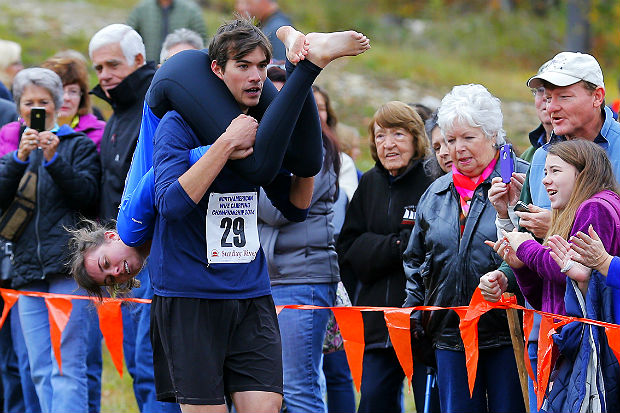 For all the oddities of the Maine event, the 278-yard course in the shape of a horseshoe presents a grueling challenge to competitors, who run up and down a steep slope, surmount log hurdles and charge through a pit filled knee-high with muddy water.

Nearly every team employed the “Estonian carry”, in which the woman hangs head down with her legs hooked around the man’s neck and her arms around his waist, thus freeing his hands to better manoeuvre the course. Despite the competition’s name, the couples do not need to be married.

Coming up triumphant Maine were Jesse Wall, a gym owner, and his friend Christina Arsenault. Under the rules of the game, they won Arsenault’s weight in beer and five times the numerical value of her weight in cash. Asked what he plans to do with the 10 cases of beer, Wall looks around and says, “Share it with everyone here.” – Reuters