'The Most Beautiful Thing': Ultra-running in Sabah

A test of endurance: The Most Beautiful Thing (TMBT) is an ultra-marathon that takes runners through Sabah's gorgeous countryside.

Hard-core runners and trekkers tackle a 100km route along the foothills of Mount Kinabalu.

THERE was a waist-deep river-crossing and lots of running over wobbly hanging bridges. Sights of mini landslides were common.

This was the hard core marathon called “The Most Beautiful Thing”, so-named because it traversed some of the most stunning scenery along the foothills of Mount Kinabalu in Sabah. It was an “ultra trail” catering to seasoned trail runners who can do 55km (within 15 hours) or 100km (within 30 hours). This was the fourth year of the event.

Although there was no ascent of Mount Kinabalu itself, the route covered exhausting climbs over elevations of 3,000m (for the 50km race) or 5,000m (for the 100km). While on the trail, weather conditions could change from a hot and sunny 35°C to a cold and rainy 15°C at night.

No external support was allowed on the trail and participants had to be self-sufficient. To that end, there was a list of compulsory items all runners had to bring along, such as emergency whistles and blankets, headlamps (of at least 80 lumens in brightness), sun protection, and yes, a compass – GPS co-ordinates weren’t provided for the event. 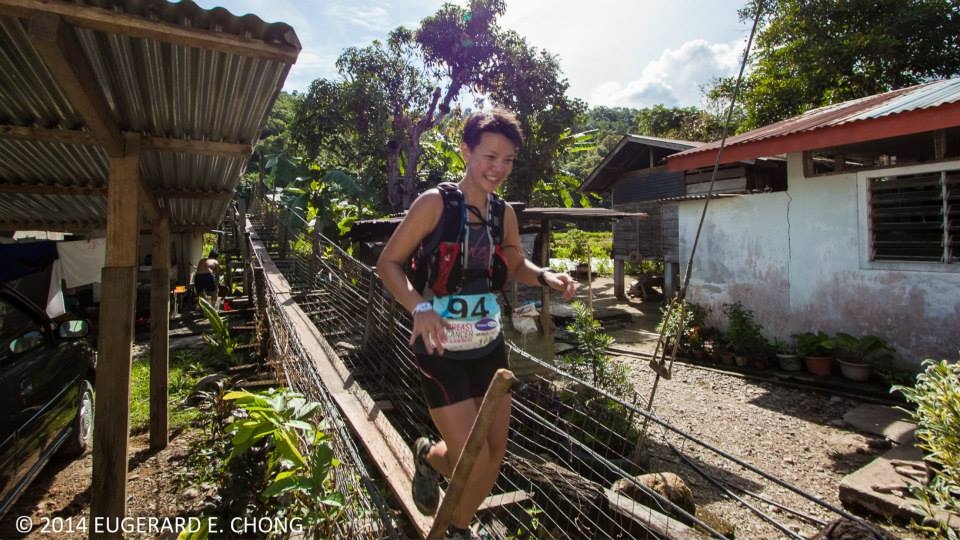 The TMBT route goes through the heart of Sabah.

Of course, runners also had to ensure they had enough water and nutrition (in the form of energy bars) plus a mobile phone – with the ring tone set to maximum so that runners would be able to hear calls or SMS from the organisers.

The race began at 7am on Aug 16 along a 4WD path. Three kilometres into the race, we met the first long and steep climb. This was a wake-up call to those still half asleep in the cold morning.

After passing through a rubber plantation, we came to the first hanging bridge. Marshals allowed only five or six participants to cross the bridge at one time to prevent over-loading. It was a 10-minute wait for my turn.

A runner on a trail used by local farmers in the hinterlands of Sabah.

Next came the waist-deep river-crossing that tested our balancing skills and our water-proofing of race-gear. I tackled this with extreme caution to avoid getting my backpack wet this early in the race.

After the river, came my favourite part of the trail with green padi fields on my left, a crystal clear river on my right and views of cloud-capped Mount Kinabalu.

At WS1 (the first “Water Station”), I quickly refilled my 2-litre water bag and was on the trail again.

After passing through paddy fields, the early part of Stage 2 was mostly narrow, undulating jungle trails shaded by thick foliage. There were numerous steep drops to a small stream and many trekkers were seen resting by dipping themselves into the crystal clear waters.

Then came the 4WD dirt trail along newly cleared hills. I started to feel a pinch on both quads and my right calf when moving downhill. Knowing this signalled imminent cramp, I rested while applying deep-heat lotion on my muscles.

Just after noon, I arrived at WS2 after five hours of trekking covering 21km. After quick bites (actually gobbles!) of juicy pineapple, I slipped into my rain-gear which included a pair of surgical gloves (for heat and water-proofing) plus light army gloves. These were to keep my hands warm in the impending highland storm. In the 100km, participants paced themselves by starting out slow.

Stage 3 began with a very steep and narrow trail featuring thick undergrowth. It was raining heavily and many trekkers were seen resting along the never-ending slopes.

After the long climb, the rain tapered down to a light drizzle and, in the mist, I went through stunningly beautiful padi fields and pineapple plantations.

I reached WS3 at exactly 2pm and was overwhelmed when cheered on by a group of local kids. I did a quick check on my left foot. Fearing that a blister might get worse, I removed my skin-tight ankle guard and twisted-dry my soaking-wet socks.

Knowing that the coming stage was of a shorter distance and lower elevation, I sped up my pace hoping to regain lost time despite hunger, cold and renewed rain. Eventually, I checked into WS4, the only pit-stop with cooked food. An ambulance was seen stationed there with helpers attending to trekkers suffering from hypothermia and joint dislocations.

Starving and cold, I swallowed down a box of curry chicken rice and five bananas with lots of hot Chinese tea. The recovery from cold and hunger was immediate. With body heat regained, I armed myself with the “night-gear” including a high-luminance headlamp, reflective vest and rear-facing blinking light – these were compulsory for all participants.

I left WS4 at 4pm knowing very well that darkness would certainly fall before I could reach the next stop. Suddenly, a fast lady trekker zoomed pass. It was Hsiao Shiang, the eventual 100km ladies runner-up winner. I sped up to stay close behind her – to see what an elite trekker did on the trail besides running. 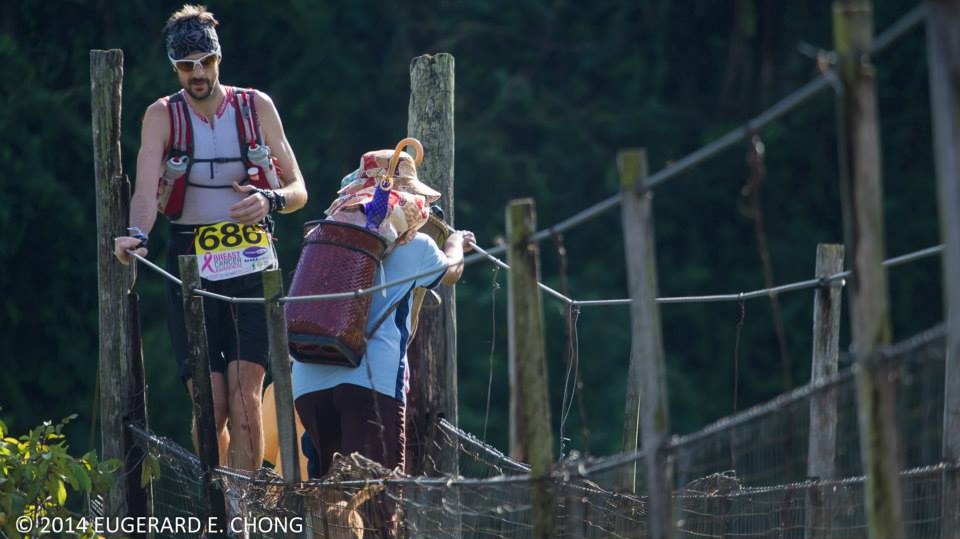 Who has right of way on this narrow bridge? Runner or farmer?

I was truly amused when she twirled her trekking pole “magically” like a drum major! Soon, she disappeared from sight and I was all alone again.

The journey along the gravel path was soothing thanks to the spectacular valley views with Mount Kinabalu as a backdrop. Then the path was blocked by mud. A trekker on the opposite side was shouting and urging me to cross the muddy strip immediately before the next mud-slide occurred.

I stepped into the mud and instantly regretted it. The mud swished above my knee and I could barely move. I “moon-walked” through the mud inch-by-inch with whatever strength I had left before finally getting on solid ground again.

Soon, a loud and low humming sound was heard: I witnessed the first mini mud slide of my life pouring down the hill, barely missing me!

Soon, I reached a highway. A race marshal checked participants if they had their rear-facing blinking lights before allowing them to proceed.

After 40 minutes of brisk walking alongside speeding vehicles, I reached the trail again. The cold mountain breeze at dusk made me shiver and I buried my entire head in the raincoat hood to save body heat.

After another four hours of non-stop trekking, I checked in at the last station at 7:30pm. The race guide told me the end was just 4.4km away. But I was warned by a trekker not to take the final stretch lightly as it involved very slippery descents and ascents.

In complete darkness, the “home stretch” saw many “butts falling on the ground” along hills planted with cabbages.

After an hour I was finally out of the wilds. I was cheered on and directed by volunteers towards the finishing point. Physically, I was dizzy and shivering during the final 1km climb but mentally, my spirit was still high.

I was overjoyed upon reaching the finishing point, and I punched the air. After 13 hours and 50 minutes of a mostly lone 50km-journey on foot, it was all over.

And yes, a little inner voice asked me to return for the ultimate 100km challenge next year ...

The photos for this article were taken by Eugerard Eugene Chong, a volunteer freelance event photographer whose day job is as an assistant health inspector in Kunak, eastern Sabah.

“It’s a hobby. I love adventure and nature. During TMBT, apart from photographing the participants I can also capture the amazing scenery and learn about indigenous people’s life and culture,” he said.

“When I do things that I love, it feels enjoyable even if I am climbing hills or getting wet and muddy under the hot sun or the cold rain. Regardless of how dirty or tired I may be after, I am happy about what I have produced.”