Colours of distinction: When oil palm is right for picking

THE TERM “Don’t judge a book by its cover” will not apply to the case of the VIR gene breakthrough.

That’s because this VIR (or VIRESCENS) gene determines the outer skin colour of the oil palm fruit as it ripens, which is key to knowing the right time for harvest.

Harvesting too early significantly decreases oil yields. A 1% increase in palm oil yield alone is worth in excess of RM1bil annually.

On the other hand, collecting overripe fruit means lower oil quality. Palm oil accounts for 45% of the world’s edible oils.

What happens now is that harvesters decide whether oil palm fruits are ready to be cut down merely by looking at their colour. It's easier for harvesters to tell when the virescens palm fruit (above) is ripe compared with the nigrescens variety (below) because of its bright orange colour. 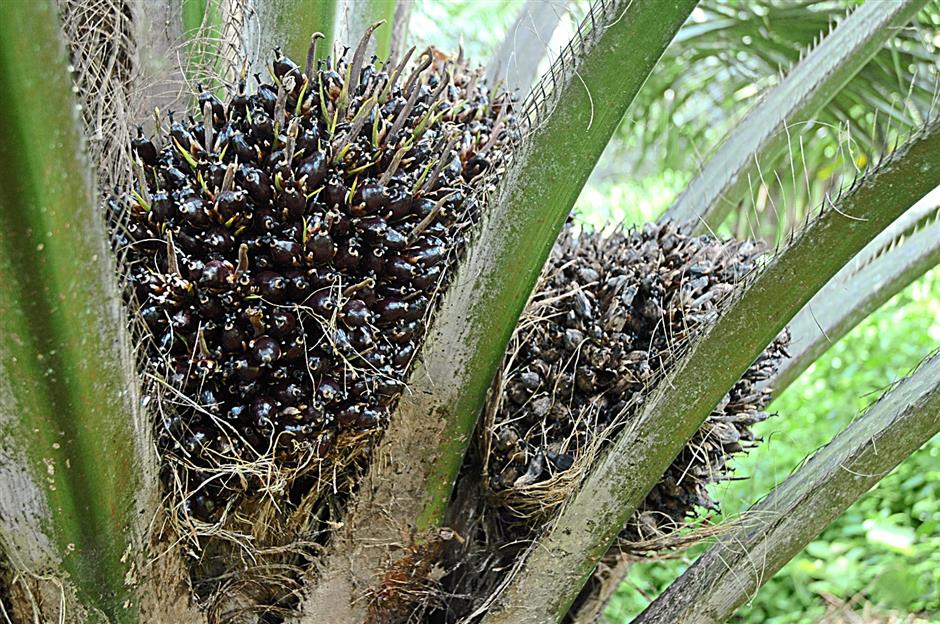 Currently, most of the palm fruit harvested in Malaysia and Indonesia are of the nigrescens variety. These fruits basically turn from black to dark purple at the apex of their ripening, hardly a drastic change visually.

Bear in mind that these fruits sit up to 18m (60ft) high up on a palm tree, making the job of harvesters even more difficult.

Another way is to check for fallen fruit on the ground, indicating a mature bunch above. However, that is still a hit and miss alternative as harvesters have to decide which bunch in which tree has dropped fruit.

However, in the rare virescens oil palm variety, fruits change colour from green to bright orange as it ripens, giving a much clearer indication to harvesters.

Their study was published recently in the June issue of a journal called Nature Communications.

“With the discovery of the VIR gene at the molecular level, breeders will now be able to select the right gene form in order to propagate the virescens palms,” said Rajinder Singh, head of MPOB’s genomics unit. “Without the foresight of these scientists to collect specimens of oil palm from across the globe, it is unlikely that we would have access to the samples that enabled us to identify the VIR gene. This collection, along with the recently completed genome sequence, is accelerating discoveries in oil palm genetics that will help us develop tools to increase the efficiency of our selective breeding programmes and pave the way to increased productivity,” said Choo.

“I am very proud of the team at MPOB and I hope this achievement will put the agency on the world map,” she added.

According to N. Rajanaidu, MPOB senior research fellow, originally all oil palms are of the nigrescens type, which later mutated to other varieties like the virescens palm.

“Currently, virescens palms generally grow in the wild and account for less than 1% of all palms,” he said.

With the identification of the VIR gene, palm growers can begin to replace their nigrescens palms with virescens plants, eventually increasing the efficiency of harvest and oil yield.

So, what’s the next step following this discovery?

MPOB’s advanced biotechnology and breeding centre director Dr Raviga Sambanthamurthi said that the agency and its consortium partners are actively working to convert the discovery into a simple molecular test.

This test can be used widely by the industry and other interested parties such as researchers in public and private universities.

“MPOB anticipates that a simple assay will become available by the first quarter of 2015. The assay can then be used by breeders to develop elite virescens planting materials,” she explained.

In a normal breeding practice, it can take up to 12 years to carry out one selection cycle. To develop new cultivars, two or three breeding cycles are required, meaning it can take up to 36 years just to develop a new and improved oil palm cultivar.

“We believe that with the discovery of the fruit colour gene, the breeding process can be significantly reduced by half, as selection for palms with the desired fruit colour can be done in the nursery without having to plant and evaluate the palms in the field,” she said.

“As the replanting rate in Malaysia is 4% per year, we believe as a start, at least 0.4% of the new materials (or 20,000ha) planted can be of the selected virescens palm.

“The initial introduction of these palms will likely result in increased planting in coming years as confidence builds in the industry to use virescens materials,” said Raviga.

However, the initial increase in yield is only expected to be realised in about six to seven years as the palms only start fruiting about three years after planting.

What does this translate to in terms of dollars and cents?

The current average palm oil yield is four tonnes of oil per hectare per year.

Taking the initial hectarage planted with the virescens to be around 20,000ha, even a 1% increase in yield can result in an additional 800 tonnes of oil a year, which brings an added value of RM2mil a year.

“This is only expected to increase as the hectarage planted with virescens palms increases annually. Better management of field operations due to ease of identifying ripe bunches is the added advantage,” said Raviga.

The identification of the VIR gene complements the same scientific team’s earlier discovery of the SHELL gene, which leads to palm fruits producing higher oil yields of up to 30%. This finding was also published in Nature last year. By combining the VIR and SHELL gene traits, breeders can develop palm lines that will further boost the efficiency of harvest and impact oil yield.

With growing world population (estimated at eight billion people within the next 15 years), there is mounting pressure for agricultural land to meet increasing demand for food worldwide. The MPOB team’s discoveries may help prevent wild habitats from being converted to more agriculture land.